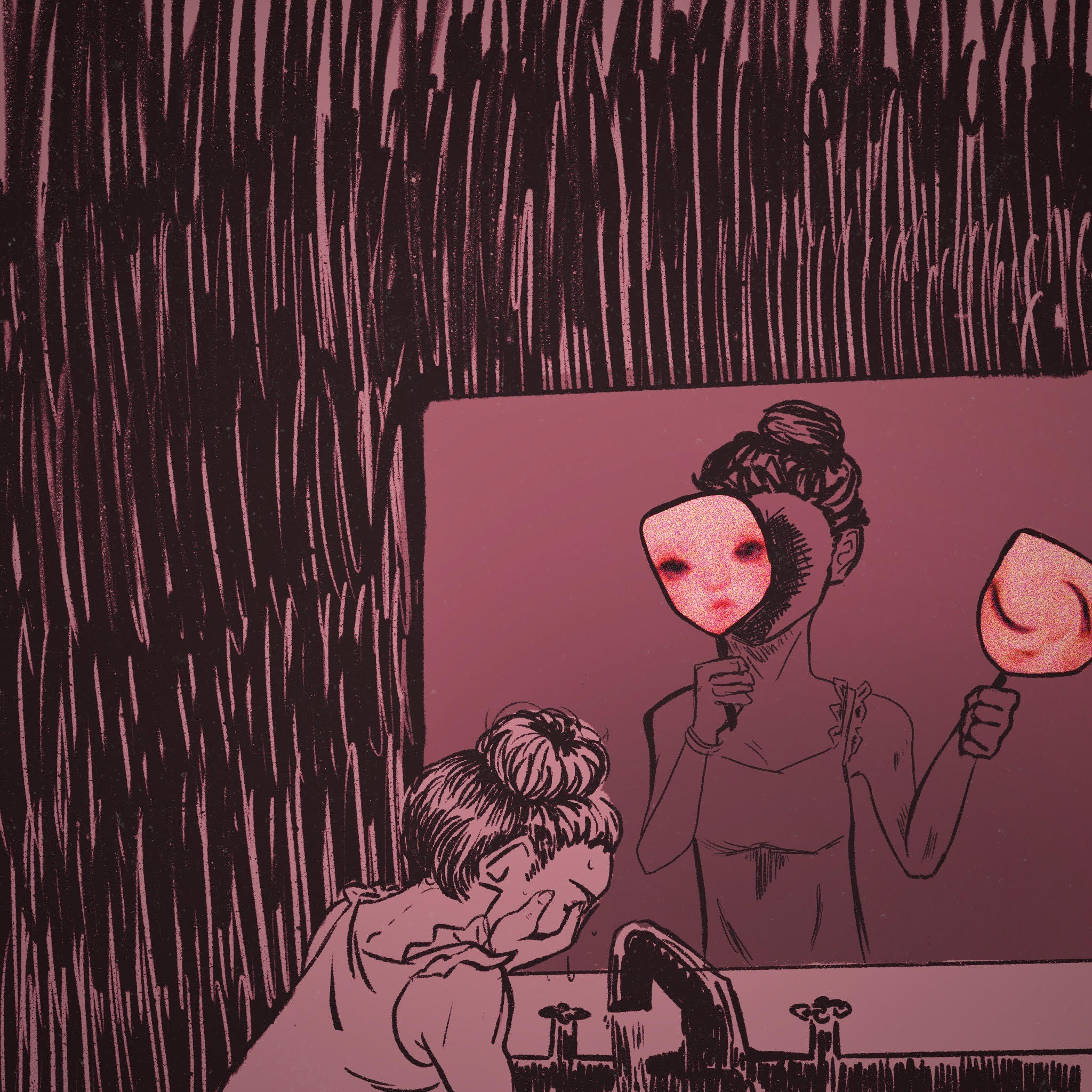 “Well… do you like it?” Jessie’s dad asks, standing by her side as they both look at the new vanity he made for her. The rectangular-shaped mirror is framed by bulbs that brighten the entire room. White wood and pink flowers framed the bulbs- suitable for a princess. Jessie looks at this princess mirror in awe. She flicks the lights on and off not sure how to express her gratitude to her father, “Yeah, it’s really pretty. Thanks, dad.” Jessie’s father smiles down at her and ruffles her hair, “Anything for you, you deserve it.” He walks out of her room, leaving his daughter to play with her new mirror.

She sits down on the matching stool and admires her face. At a young age like this, Jessie doesn’t see much wrong with her face. In fact, she thinks she looks like a real princess. She loves her slightly crooked nose. It looks just like her dad’s. She likes her thick dark eyebrows, they help her make funny expressions. She thinks her baby hairs are normal, they are growing just like her. She tugs on her dark curls and watches as they spring back into a spiral. No matter how hard she pulls, they always bounce back. And so she stares at herself and stares some more. She makes funny faces, making her dark brown eyes widen as big as they can, her lashes reaching to touch the top of her bushy brows. She blows kisses and blows air into her round cheeks.

It’s interesting how carefree and innocent young girls can be. They have a level of ignorance which allows them to find beauty in everything. But, the world can be a cruel place, especially for a young brown girl. As she grows, her perception of herself shifts, not because she no longer thinks she is beautiful, rather it seems as if the world continuously tries to tell her she is not.

“the world can be a cruel place, especially for a young brown girl.”

As Jessie moves from a young girl to a teen she no longer likes the same things. Princesses? Lame. Her dad? Super lame. Bushy eyebrows? Gross. Nose? Gosh, don’t even get her started; she has a mason jar filled with coins labeled ‘nose job.’ As Jessie sits in front of the vanity with her new friend, they start to get ready. The once pink vanity was now covered with black nail polish.

Jessie’s friend is obsessed with her mirror, she thinks the vanity is cool and can’t believe Jessie’s dad built it for her. “Why didn’t he just buy one?”, her friend asks. Jessie looks at her through the mirror, hand on her cheek, she looks at her friend’s straight nose, her flat hair, her nearly invisible lashes, and eyebrows. “Why would he buy one if he knew how to make it?”, Jessie asks. Her friend just shrugs her shoulders and plugs in the straightener. “I don’t know, easier I guess than it would have been if professionally done.” As the straightener heated up, Jessie looks at her friend and wonders why her dad didn’t just buy a vanity for her. “My dad just bought me one. It’s really nice, bigger than yours, and the lights change colors.” Jessie didn’t know how to reply, so she just nods her head.

Jessie’s friend got her thick dark hair and began splitting it into four parts. “Dude, your hair is seriously puffy when you brush it out. How do you deal with it? I would die if my hair looked like that.” The girl chuckles as if it was a funny joke. Jessie didn’t find it funny and responds, “I get it from my mom, she has a lot of hair, does it look bad curly?”

“I mean with your complexion it looks nice but, if you looked different it would look weird.”

“What do you mean weird?”

“Like on me, that hair would look ridiculous.” Jessie looks at her friend as the smoke rises from the straightener and the smell of burnt hair lingers.

“Yeah you couldn’t pull off these curls,” Jessie laughs.

“What curls?”, her friend laughs back, as she brushes out Jessie’s long, dark, and now silky straight hair.

Jessie looks at her hair and tugs on pieces like she used to. They don’t bounce back anymore. After Jessie’s friend darkens her eyebrows, it almost looks like she’s trying to mimic Jessie’s, but she isn’t, because she once said that maybe she should thin them out. Jessie applies some makeup and they leave to go rollerblading with some kids from school.

At the rink, the girls skate, fall, and laugh. As they make a loop around the oval, Jessie’s friend takes out her phone to take a selfie. Jessie smiles so big, she can’t help it, she loves being with her friends. Both girls slow down to the side to inspect the picture. Jessie looks at it with a soft smile, they look amazing. Her hair looks different than her usual pictures but her dark tresses compared to her friend’s pale ones make it look cool. Jessie’s friend zooms in on her own face, “Gosh I am so happy I have straight teeth, it makes my smile look so much better. I think I would die if I had crooked teeth.” Jessie’s smile never shut so quickly in her life.

She looked at her own picture and saw how her two front teeth were crowded together causing her others to overlap. She didn’t think it made her look weird, or any less pretty. Well, not until now. Both girls returned their skates to the young man working the stand. As they waited for a ride home, Jessie’s friend asked to take more selfies. She couldn’t find it in herself to smile with her teeth, so with a tight-lipped smile, she looked at the camera.

Jessie looks at the photo. Her friend smiles so brightly, and her eyes sparkle. Jessie’s crooked nose is making an appearance because her friend angled the camera high, and her smile is hardly noticeable over her giant nose. “I look great. Do you mind if I crop you out Jess?”

Jessie shook her head no.

Jessie follows her friend into their large family van. Jessie’s friend sits in the front and immediately puts her headphones in. Jessie didn’t bring hers. She says hi to Jessie’s father and sits behind her friend. But of course, he had to break the comfortable silence.

“So Jessie, excited for high school?”

“What do you think you want to be when you grow up?”

Jessie couldn’t help but light up at the question; it’s not every day she gets to share her dreams with others. With her eyes a bit bigger and brighter, she scooted to the edge of the seat and looked at the balding man in the front of the car. “I want to be an architect. I want to design buildings.”

“Yeah, but I don’t want to physically build them, just design them.”

“Sounds like a lot of work for a girl of your background. Those architect schools sure are expensive, and students take a long time to graduate.”

“My parents tell me not to worry. When I make it, they’ll help me figure it out.”

“I’m sure with all that free money you’ll get it won’t be hard.” Her friend’s dad pulls up to the curb of Jessie’s house. Jessie stares at her dad’s old ‘97 blue Nissan truck. She rubs the leather of the seat.

“Even if it is hard, I know I can do it. Thanks for the ride.” With that, she closes the door and walks into her house.

Jessie walks straight to her room and looks at her vanity, with all the black chipped nail polish surrounding it. She smiles at the mirror, with her teeth big and bright. She touches her flat hair. She looks in the mirror and pictures her future, one where she works hard and makes her dreams come true. With the seeds of doubt planted, she now thinks of other careers, maybe just a degree from the community college down the block. It is more affordable, she reasons. Maybe just an assistant to an architect. “I would still see everything, I just wouldn’t be a part of it.” She looks at her reflection once more, pulling a straight strand of hair and watching it fall back into place.

Later, after three years of braces and burning her hair throughout high school, Jessie will look in the mirror again. She will discover that just because other people don’t like who she is or what she looks like, it doesn’t mean she isn’t good enough. Her curls will bounce back just like she will and her nose gives her character. Many young girls learn too late that they are perfect the way they are, with their frizzy hair and crooked noses. It’s important for young girls to enjoy their reflections for as long as they can, without anyone giving them a complex, or creating insecurities.

Brought To You by Small Business