How one Latina found new life by merging two worlds 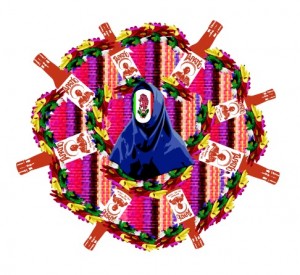 As a child of Mexican immigrants, I grew up culturally Catholic. But since I couldn’t find him there, I decided to seek Him for myself. I never lost faith in God and after years of searching, I finally found peace in Islam.

Even though I was extremely content with my new religion I felt lonely at UCLA. I quickly found myself bound between two completely different minority groups in America—Muslims and Latinos. Already a minority on campus as a Latina, I was also a minority in my religious community since the majority of Muslims at UCLA are of Arab or South Asian descent. I felt like an anomaly, so I began to overcompensate my Latina identity by rolling “r’s” in conversation and carrying Tapatio hot sauce everywhere I went. I became known as “The Latina” of the Muslim Students Association (MSA).

After two years, I stumbled on an old issue of the Muslim student newsmagazine, Al-Talib, that discussed the Los Angeles Latino Muslim Association. I soon began inquiring about the stories of other Latino Muslims and found out that a friend of mine named Karla (also a Mexicana) had converted to Islam.

I finally found someone with whom I could share my experience. We exchanged stories about how our families confused Islam for Hinduism, the pain in having to give up chicharrones, and, ultimately, how our friends and loved ones felt about our conversions. Sharing this experience with Karla helped balance my identity as a Mexican and Muslim woman.

I have been a Muslim for over three years and am actively involved in the Muslim community through MSA UCLA and MSA West. Participating in such organizations has allowed my distinct identity to be expressed.It has also provided channel through which my political drive can be exercised—by educating my two different communities on issues ranging from the DREAM Act to Ramadan.

It was not hard to gain acceptance in the Muslim community since the Muslim brothers and sisters shared similar values towards family as I did and also because…they love converts! It was however difficult to try to learn new vocabulary. For example, the word for “mijo” in Urdu is “beta” (term of endearment). It was funny.

I connected with my peers in MSA through childhood stories and discussions on food.After bragging rounds, I dispelled rumors that Mexican food didn’t just consist of tacos and burritos.I introduced them to albondigas, ceviche, and authentic tamales. And of course, they had to recognize the superiority of Mexican cuisine.

I represent a growing population of converts in the United States. According to a 2010 report by The Pew Research Center, the Muslim population is around 2.6 million. Although the exact number of Latino Muslims isn’t known, Hjamil A. Martinez-Vazquez, author of Latina/o y Musulmán. The Construction of Latina/o Identity among Latina/o Muslims in the United States, explains that it ranges from 75,000 to 100,000.

To this day, I am still reconciling my identity as a Mexican Muslim woman.I am given the opportunity to shape the narrative of my community in this country. With my strong grounding in my faith, I look forward to contribute to the great legacy of the leaders in the Latino community.