You are here: Home / Blog / code-switching 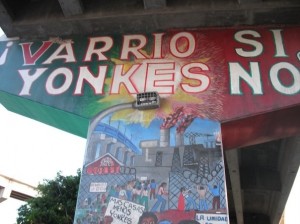 A mural in an area with high Latino population uses the Spanglish word yonkes, which means junkyard. PHOTO:Haidee Pacheco.

Is this something you are likely to say? If it is, then you are already familiar with Spanglish, a blend of Spanish and English originating from the Latino communities in the US.

While the US doesn’t have an official lan- guage, it is English dominant. In a cultural and linguistic rendezvous, Spanish-speaking immigrants have amalgamated their native language with that of the US.

Spanish colonization introduced the Spanish language into the Americas. But Spanish became a prominent language in the US after the victory of the Mexican-American War when Mexico lost almost half of its territory, including most of the Southwestern US.

The US gained new territory, new people, and most importantly a new language. With the help of the ongoing cultural exchanges, this language evolved into a new dialect: Spanglish.

Bilingual Latinos frequently engage in code-switching, alternating between English and Spanish in the same conversation. Zindy Valdovinos, a UCLA second-year history student of Mexican descent, grew up speaking both English and Spanish. She was raised speaking Spanish in her home, but English dominates her interactions outside the home.

“Algunas veces no puedo traducir [la frase] porque como estoy traduciendo de inglés a español me cuesta. Así que me…¿Cómo se dice? Stuck,”said Urtubia. (“Sometimes I can’t translate [the phrase] since it’s a bit hard for me to translate from English to Spanish. So I usually get…How do you say it? Stuck.”)

Sometimes, introducing English into Spanish discussions serves a functional purpose. Urtubia could not remember how to say “stuck” in Spanish, so she simply said it in English.

Other times, rather than mixing words here and there, people create entirely new ones by taking an English word and giving it a Spanish pronunciation. Words such as fensa (fence), troca (truck), breik (break), and lonche (lunch) are great examples.

To test this out, I printed several pages with images of the objects men- tioned above. I asked Spanish speakers to identify the images and many of my respondents proved Professor de la Torre right.

Ramón Rodríguez, a UCLA Housing and Hospitality Services employee who speaks mostly Spanish, identified an image of a parking lot as a“lote de parking.” However, the formal Spanish term would be lote de estacionamiento.

It is incredible to hear languages evolve. But why exactly are we converting our Spanish language to this Spanglish dialect?

“[Spanglish is] a strategic mechanism to enable the survival of that language,” said Professor De La Torre.

So the questions now are: Can Spanish survive in the US or will Spanglish become the language of the future? Should we keep our native languages or completely adapt to a new culture?

I personally think it is a good idea to know Spanish, English and Spang- lish in order to preserve our cultural background. Cuál es yours?