Tag Archive for: May Day

WHAT IS MAY DAY?

Since 1886, May Day is recognized as International Worker’s Day and celebrated throughout the world to commemorate the struggle for economic, social, and labor achievements such as the eight-hour day, and in the past years has come to significantly acknowledge the immigrant right’s movement.

UC Workers are under attack by UC administrators who plan to outsource workers, cut wages, benefits, and pensions. UC Workers have been in negotiations with the UC administrators since September, but the UC has failed to negotiate a fair contract for UCLA workers.

While the UC is raising administrators’ salaries, maintaining their lifetime pensions, and increasing student tuition, workers are facing a severe attack on their livelihood. This struggle is about quality education and quality patient care!

Below are photos from today’s MAY Day action at UCLA, including the rally in Meyerhoff Park and the students’ protest in front of the Chancellor Gene Block’s office.

At Olympic and Broadway, on May 1st, people organized themselves with their banners before the rally started. Photo by Charlene Unzueta.

On May 1st, 2012 on Olympic and Broadway in Downtown Los Angeles, people gathered for a rally that began at 1 PM. Music played while people organized themselves behind their banners. As a participant, it was empowering to be part of a rally of diverse organizations that had come together for a general strike.

I began to come to these May Day rallies a few years ago, after learning about them from my family. It is my family that continues to pass their political knowledge and activism onto me. These events for me are great because not only do I get to spend time with my loved ones, but I also like to see other families partaking in the same events as my own.

With the elections coming up this year, May Day 2012 was a sight. It was full of signs asking for change and reform. There were also many signs reminding politicians of the promises they had made the last time they were running for a office, such as stopping the cuts on education and true immigration reform.

On this day, we were able to speak out together about a plethora of issues that 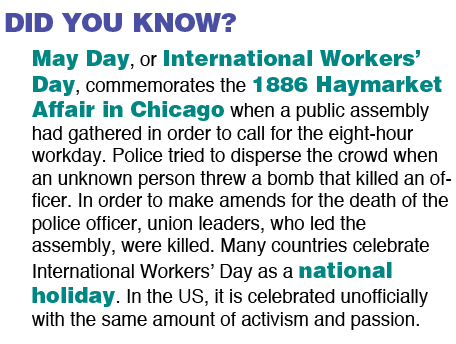 included workers’ rights, queer rights, education reform, and immigrants’ rights. Because there were so many issues represented there was also a diverse group of individuals that ranged in age, ethnicity, and socioeconomic status.

While the majority of individuals that were there went to support the different causes, there were also cynics amongst the crowd. “They don’t even know why they are there…they don’t have any real demands.”

These rallies are not just for show and on the contrary, May Day has a sense of unity that prevails over any other idea or feeling.

She discussed how it is unacceptable that 400,000 people are deported every year and that we must organize and mobilize in the streets and at the polls. “Vamos a votar en Noviembre? Es por nuestras familias, nuestros hijos, para el futuro de esta nacion. A registrarnos, a votar, a crear poder, para que republicano o democratico esuche el clamor de nuestro pueblo.”

People who would normally not speak out about their complaints held signs proudly and without fear, displaying their concerns such as “Legalize my partner.”

Throughout the rally, police filled the streets, and despite the intimidating image of being surrounded by police, we were all united as one. Intimidation would not win on this day. 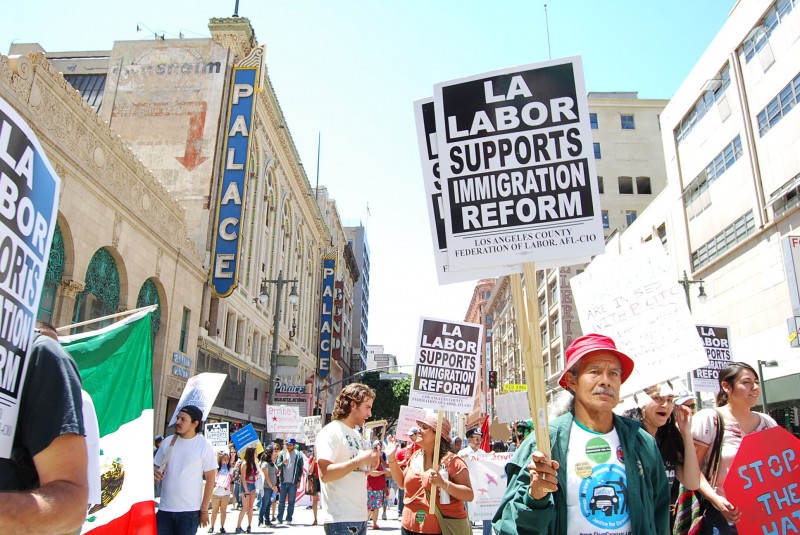