Tag Archive for: US Census

You are here: Home / Blog / US Census

When an elderly woman walked into Supercuts that day, Raquel Alexander wasn’t expecting to be insulted simply for being herself, especially not at her job.

“What ethnicity are you? Are you Indian?”

“No, actually I am mixed. I am Black and Mexican.”

“Ugh! Those Blacks and Mexicans need to stick to their own race and stop mixing with one another!”

Stunned and grossly offended, Raquel complained to her manager, who ignored the racist comment and sent her to lunch.

This moment has stuck with Raquel for years, and it is only one of the many times she has encountered this type of discrimination as a mixed individual.

According to the US Census Bureau, the amount of people identifying with two races or more increased by 32% from 2000 to 2010. The nation’s mixed population is growing as more people identify with multiple ethnic backgrounds.

Unfortunately, they may also experience the same discrimination that Raquel faced at her job. For some mixed people, it is easier to identify with just one race so as to avoid being judged, insulted, or scrutinized.

Raquel is one of those victims who felt that she had to hide a part of who she is so as to avoid being an outcast.

“I tell people that I am just Black because it is most people’s first impression of me,” she said.

Raquel is an African and Mexican American female with her associate’s degree in social science. She stated that because she does not speak Spanish, she feels that she cannot truly identify with her Mexican roots. She cannot relate to her Mexican-half since she does not feel that she was exposed to this culture, especially the language. “It has limited me from more job opportunities,” she said.

Yet, she believes “being mixed is a good thing because it means more diversity.”
Mackenzie Rossi is a female Mexican and Caucasian, a second-year business economics student. “I tell people that I am ‘White,’ so as not to confuse people, or explain why or how I am mixed,” she said. Unlike Raquel, she was exposed to her Mexican culture, but given a negative view by her grandfather.

“My grandpa (who emigrated to the US from Mexico) felt that I should identify solely with being White, especially when going to school, because he felt that in US society, it was not OK to be Mexican.” The schools she attended while growing up influenced her decision to identify with one race.

“It wasn’t until high school I began to identify with both ethnicities. It’s a struggle to be mixed because other ethnicities don’t accept you; you feel like you don’t have a ‘home.’ ”

Fortunately, Mackenzie also found being mixed to be a positive characteristic, “You are getting the best of both worlds!”

Ivan Pena-Aparicio, a third-year human biology in society student, had a different perspective on being mixed in the US, especially because he was raised in Latin America.

Ivan is Panamanian, Spanish, and Brazilian. Although he identifies with one race to avoid confusion, he appreciates being mixed. “I embrace all of them and don’t necessarily choose one over the other, but I say Latino because it is an ethnicity that most people can recognize.”

Originally from Latin America, Ivan realized that the perception of mixed people in the US differs significantly from the perceptions of those in Latin America. “In Latin America, it is more common to be mixed. It wasn’t until I came to the US that I realized people who were mixed were affected in a negative way because they felt they couldn’t fit in with the majority or the minority that they are mixed with.”

Ivan feels that because he is not from the US, he doesn’t face the same struggle as those who were born mixed in America. “It is not that I’m mixed but that those from the US that are mixed aren’t okay with being that way.”

For this reason, he co-founded the UCLA Mixed Student Union. An organization that focuses on multi-cultural dialogues which encourage people to become more open-minded and learn something new about someone else’s culture.

“Being mixed is talking about mixed experiences, something that many of the students at UCLA share in common – that they may not identify as being mixed, but in many ways are.”

These individuals have different views of what it means to be mixed and the struggles that go along with it. The Census Bureau has proven that there is an increase in the mixed population, which probably continue to grow in the future.

Thus, it appears, as said by Raquel, “I want people to see me as both ethnicities, not just one.” 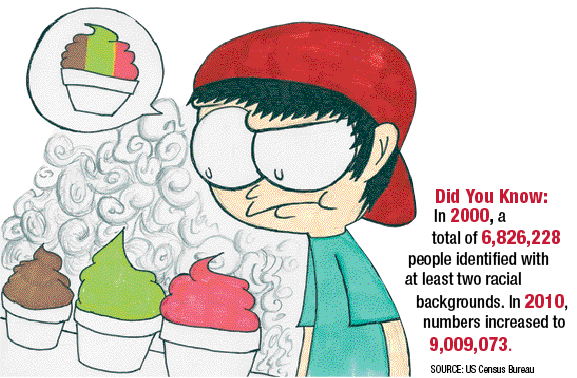