I have never considered myself flaquita but neither did I consider myself overweight. In my hometown, which is mostly Latino, I was considered average size. It was only when I began to attend UCLA that I began to feel like a monster.

When I saw my friends and I hugged them or high-fived them, I felt like I would break them. I would watch movies or TV and read fashion magazines and saw how women were getting smaller. I started wishing that I could look more like my friends or I could look like the women on TV. I started working out to lose weight but no matter what, I was not looking like these women. You know why?

Yo soy LATINA! I have curves; it is in my genes to have caderas.

But where are our Latina role models? I used to love Shakira (still do) but what I loved most was how she would embrace her body and her curves. “My hips don’t lie”–what a perfect song! But have you seen her lately? Esta secita! Her hips do lie!

I will admit that not every Latina is a naturally curvaceous women. Eva Longoria is probably the best example of a flaquita Latina.

However, from the moment America Ferrera hit the Hollywood scene, she embraced her curves. Granted she has lost weight since she became famous, but she is a prime example of how you can have a healthy weight and still have curves.

Watching America Ferrera on “Ugly Betty” made me realize I could do the same. The way she is comfortable with her body is how I think she gets her acting roles. Where most women resent their curves, America just owns them.

For Latinas like me, our curves are who we are. It’s not bad if we do not look like the typical Hollywood stars. We embrace our curves and own them. When we do, we become our own role models. 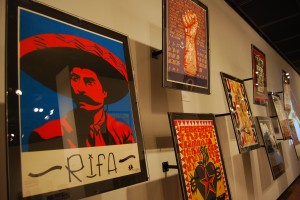 The event this year was dedicated to Chon Noriega, the director of the CSRC, in celebration of his 50th birthday, 10th year as director, and 15th year as editor of “Aztlan: A Journal of Chicano Studies.”

The open house was held in the Fowler Museum courtyard where the guests mingled around the fountain meeting old friends and catching up with fellow artists while eating Mexican cuisine such as enchiladas, quesadillas and flan.

The Fowler presently hosts two exhibitions from the CSRC’s L.A. Xicano project, “Mapping Another L.A.: The Chicano Art Movement” and “Icons of the Invisible: Oscar Castillo.”

After much praise and anecdotal accounts of how individuals met and were introduced to Chon Noriega, he gave a few words describing the importance of increasing visibility of Chiana/o Studies, and Chicana/o art within the community. This has been a primary motivation for the L.A. Xicano project across Los Angeles museums, which include Autry National Center and the Los Angeles County Museum of Art.

Noriega also commented on the need for Chicana/o art to take up space within a community as a method of gaining credibility.

The Chicano Studies Research Center open house was a celebration of Chon Noriega’s work as director, and it concluded like all celebrations, with a cake imprinted with the CSRC logo. 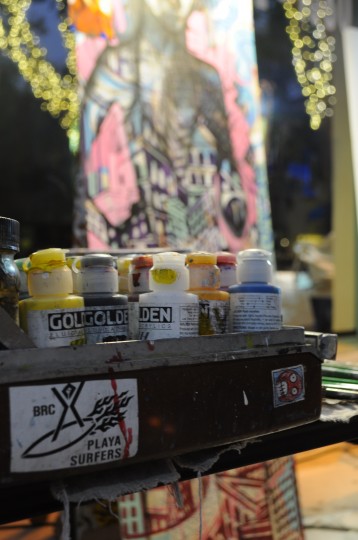 John Park's paintbox against the backdrop of his artwork 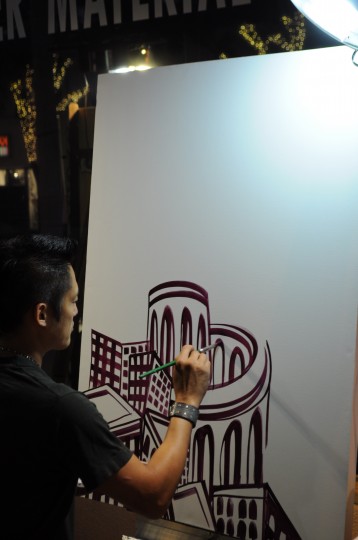 Local artist, John Park, contributes to his collaboration piece with Mimi Yoon at the Bluecanvas booth for Westwood LIVE.