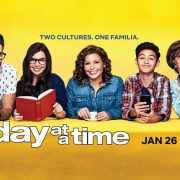 The reboot of “One Day at a Time” on Netflix has taken the entertainment world by storm with its portrayal of a Latinx family dealing with various issues such as being light skinned and Latinx, being a veteran, and coming out as LGBT. The series follows a Cuban-American family living in Echo Park made up of veteran and single mother Penelope Alvarez (played by Justina Machado), her 15 year-old daughter Elena (Isabella Gomez), her 12 year-old son Alex (Marcel Ruiz), her mother Lydia (EGOT winner Rita Moreno), and her landlord Schneider (Todd Grinnell) as they try to navigate through life while maintaining their Cuban heritage. With only two seasons out, fans have responded positively to the show’s diverse cast and subjects with reviews hailing its original take on the classic 1970s sitcom by Norman Lear.

“One Day at a Time” provides the much needed representation in the media for communities that often aren’t discussed such as Latinx single mothers, veterans, and members of the LGBT community. Justina Machado’s character sheds light on issues that veterans face such as dealing with mental health with scenes that depict her hesitancy to accept antidepressants and her mom’s stance on the invalidity of mental health. When questioned on the representation of veterans in an interview, Isabella Gomez stated that “There’s no representation for you guys [veterans] in the media so then, it’s that whole thing of like, ‘Do I reach out? Do I get professional help? Is this a real thing?’ Because it’s never talked about, and it gets to be taboo.”

The show tackles the issue of colorism in the Latinx community as well by devoting time to explaining that Latinos don’t have a set description of how they should look. In the second season, the Cuban-American family acknowledges the fact that Alex’s darker skin and Elena’s fair skin influence the way that racism affects them in their daily life. In one instance, the family confronts Alex’s recent strange behavior and discovers that Alex has been called racist slurs during school events. When his family tries to comfort him and offer support, Elena questions why she has never dealt with a similar situation and realizes that her complexion plays an important part. Jessica Diaz, a second year UCLA student, appreciates the way that “One Day at a Time” acknowledges the issue of colorism in the Latinx community and its representation. She says, “I think that representation is important to start integrating the media. Getting our people out into the social eye is important since we don’t want to fall into a certain stereotype and Latinos honestly come in all shades.” The show’s inclusion of the issue with colorism provides an outright response to the representation of Latinx people and makes people more aware of the problem.

The show’s inclusion of Elena Alvarez’s sexuality and coming out process also establishes the representation of the LGBTQ Latinx community. Megan Townsend, a senior entertainment strategist for GLAAD (a U.S. non-governmental media monitoring organization), called the show’s portrayal helpful to ”real LGBTQ youth to recognize they aren’t alone, [and] also foster understanding and accelerate acceptance in their peer groups.”Elena’s coming out story is authentic and relatable with a Latinx spin that includes various humorous and emotional moments. In one scene, Penelope asks Lydia, a very religious character, how she feels about Elena’s sexuality and Lydia responds by considering the Pope’s opinion on homosexuality and stating “Am I going to go against the Pope and God? Who the hell do I think I am?” which provides the comedic aspect that the show is known for while showing the religious component of Latinx heritage.

In a media industry that typically doesn’t focus on issues such as colorism and mental health for veterans and rarely features certain communities, “One Day at a Time” shows a refreshing twist for the world we live in now. With plenty of social commentary and pop culture references, “One Day at a Time” normalizes the Latinx family and gives the contemporary audience insight on navigating through issues in today’s world. With a loyal following and a 100% Certified Fresh rating for season 2 on Rotten Tomatoes, the third season of “One Day at a Time” is very anticipated and will be released on February 8.