You are here: Home / Blog / bicycle 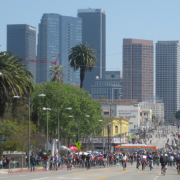 At 5:05 PM on a Monday afternoon in late March this year, Christine Ramirez, 55, was hit by a car while riding her bike near her home in Pasadena, fracturing two ribs and bruising the right side of her abdomen. “I was wearing my helmet, I waited for the light to turn green, and I looked both ways before crossing into the intersection,” Ramirez said. Despite all her safety precautions, she didn’t have time to react to the car that was rolling through a right turn, which put her on bed rest for two weeks.

Fortunately, for at least one day, Ramirez and all other Angelenos didn’t have to worry about the dangers of cars. On Sunday, April 10, 2011, Los Angeles celebrated its second CicLAvía, a car-free streets event that gives people an opportunity to enjoy their city from the ground instead of from their cars. From 10:00 AM to 3:00 PM, the streets of downtown Los Angeles were closed to all motorized vehicles and open for bicycles, tricycles, wheelchairs, or simply walking.

Cycling advocate Bobby Gadda first brought the concept of CicLAvía to Los Angeles in 2008 after a visit to Bogotá, Colombia, where over 70 miles of streets are car-free every Sunday. He had noticed how unpleasant LA streets are for people and was immediately inspired by Bogota’s 35-year-old ciclovía, the Spanish word for bike path. “It really changed the culture of the city and made it a more humane place to live,” said Gadda.

Following the same route exactly six months later, CicLAvía’s second event was even bigger, with an estimated 130,000 participants, according to KCET. Still, each participant was able to personalize their experience.

Ross Bernet, a UCLA 4th-year environmental science student, and Michelle Oyewole, a UCLA 4th-year communications student, along with 15 other UCLA students, rode their bikes to CicLAvía from UCLA, a 10-mile ride. For Bernet, CicLAvía is invaluable because of the safe space it provides. “Most of the time you’re biking in LA, you’re by yourself. There’s so many cars, and it’s dangerous and it seems sketchy,” said Bernet. Oyewole appreciates the sense of community. “It’s a chance to see LA how you wouldn’t normally, the streets free of cars, everyone biking together,” Oyewole said.

For others, CicLAvía is a family event. Martin Puerta, a 42-year-old resident of Boyle Heights, is a father of four, ages 14, 10, 6 and 2. CicLAvía provides his children the chance to see and learn about Los Angeles. “Here they have the care of the police, they close the streets, and there won’t be a possibility of getting hurt,” said Puerta. There’s at least one thing Puerta is sure of. “We all have the right to use the street for any event. We shouldn’t continue to think that only the car has the right to the street,” he said.

The real purpose of CicLAvía, though, is just having fun. Participants could partake in numerous activities along the route in April, including visiting museums like the Japanese American National Museum and eating at food trucks like The Surfer Taco. Chivas USA had a goal-kicking booth where co-captain Major League Soccer All-Star and UCLA alumnus Jimmy Conrad was signing autographs and talking with fans. There were also dance performances, squirt gun fights, and historic bike tours.

A major highlight at both CicLAvías was the on-going pickup dodgeball game, hosted by the World Dodgeball Society, that provided entertainment as well as a way to socialize with fellow Angelenos. In addition, Lance Armstrong attended CicLAvía and spoke about cycling’s health and environmental benefits, noting how it promotes exercise and reduces greenhouse gas emissions.

The overall opinion of CicLAvía is clear: Los Angeles loves it and wants more. There are already two more events scheduled in 2011 and more in 2012. And it may not stop there. Many, including Gadda, hope that CicLAvía becomes a lifestyle. One long-term goal of CicLAvía is to create a permanent network of car-free streets throughout Greater Los Angeles, physically connecting its many dense and diverse areas.

Los Angeles just might get its wish. Mayor Villaraigosa, who has promised to get Los Angeles 1680 miles of bike paths, is behind the effort 100 percent. “CicLAvía is an opportunity,” Villaraigosa said. “In a city addicted to the single-passenger automobile, we ought to get on a bike […] and reclaim our neighborhoods. That’s what CicLAvía is all about.”