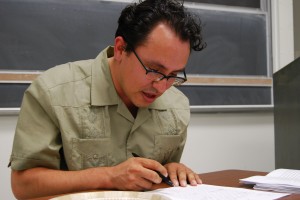 Gustavo Arellano was born in 1979 in Anaheim, California to a tomato canner and an illegal immigrant. Today he is a UCLA graduate, writes a column for the OC Weekly, is a contributing editor to the Los Angeles Times, and has appeared on talk shows such as The Colbert Report and Nightline. “I also mow lawns for $15 – $10 if I get a water break,” said Arellano.

It is this kind of tongue-in-cheek humor readers look forward to reading in Arellano’s ¡Ask a Mexican! column featured in the OC Weekly. What makes this column successful is its willingness to talk about topics that even the most open conversationalists tend to hold back from. ¡Ask a Mexican! answers any and all questions about Latinos, no matter how silly or analytical. But to those who ask prank questions, Arellano said, “I’m going to go after you.”

Beyond his column, Arellano’s greater objective is inspiring others to seek the truth because so many times people don’t want the truth to exist. So when this former UCLA graduate student was offered the opportunity to teach as a lecturer on journalism for Spring quarter at UCLA, he jumped at the opportunity.

The course Arellano teaches at UCLA is Chicano Historical Journalism, where he teaches students how to do research and write magazine-style stories about Chicano history in Southern California. The class is open for anyone interested in uncovering the truth. “They don’t need to have a background in journalism, they just need to have a passion for finding great stories,” said Arellano.

Stephanie Fletes, a second-year Chicano studies student at UCLA, is taking Arellano’s course this spring quarter.  What she likes most about the class are the readings Arellano assigns.  “The readings are stories that haven’t been told to the public. They are histories about the Chicano culture,” Fletes said.  Fletes feels it is encouraging as well as important to have Arellano as a professor, because Arellano portrays how a Chicano can make their dreams come true.

Coming from a working class background, Arellano feels he can relate to his Chicano students because, for the most part, their story is the same as his. As the first in his family to go to college, he said, “Things aren’t explained to us, yet we do it on our own.” Arellano appreciates the hardships that Chicano students must struggle with on a daily basis.

As an advocate of the DREAM Act, Arellano wants DREAMers in particular to know that they have his support. He sees undocumented residents as a major issue in the Latino community. “When are these people going to be citizens, when? We still don’t have enough Latino students going to college and getting degrees,” said Arellano.

For Arellano, uncovering the truth is not limited to his column. He has published two books and is currently working on his third, “Taco USA: How Mexican Food Conquered America.” The book, which will be available around Cinco de Mayo of next year, explores the history of Mexican food in the United States, from Taco Bell to lunch trucks.

Arellano’s accomplishments, though many, are not limited to his books or articles. His real success is measured by continually inspiring others to seek the truth and pursue their dreams. “I know what we have accomplished and I know we’re just going to continue on that same path,” he said.