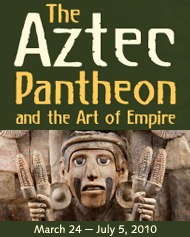 The Aztec empire has been resurrected in—of all places—the mansion-riddled cliffs of the Pacific Palisades.

Since March 24, the Getty Villa, located in the namesake’s mega-estate, has been featuring an exhibition entitled “The Aztec Pantheon and the Art of Empire.”

The modest-yet-enjoyable exhibit boasts in its collection such relics as a cuauhxicalli, a masterfully detailed offering vessel in the form of an eagle, a slue of god-depicting monuments made from vivid minerals, and Spanish artwork documenting their particular point of view of the conquest.

Of singular interest is the Florentine Codex, the post-conquest pictorial manuscript compiled by friar Bernardino de Sahagún and native elders with aim to document the Aztecs and their imperial culture and religion. The codex contains more than 2,400 images, including detailed descriptions of the chief Aztecan deities. According to the exhibit’s curators, this will be the first time in over four centuries that the Florentine Codex will be found in the Americas.

The exhibit avoids mere showcasing, and provides a thoughtful thesis that juxtaposes the Aztec empire and the empire of the ancient Romans—much like the Spanish did when discovering the new, prolific culture in the 16th century. The exhibit shows the importance that religion, art, and imperial conquest played in both civilizations citing that “to many Spaniards, the Aztecs were the Romans of the New World.” This notion itself warrants a visit to the beautiful museum.

If you are particularly worried about whether you’ll fit in amongst the typical affluent, older crowd at the Villa, have no worries, you most definitely will not (if you are anything like me). But this should hardly discourage anyone from taking advantage of these illuminating and conveniently nearby relics. “The Aztec Pantheon and the Art of the Empire” will run through to July 5 and is a free exhibition, excluding the $15 dollar parking fee. LA Gente recommends you carpool, Latino-style!