The Foundations of Fetishization 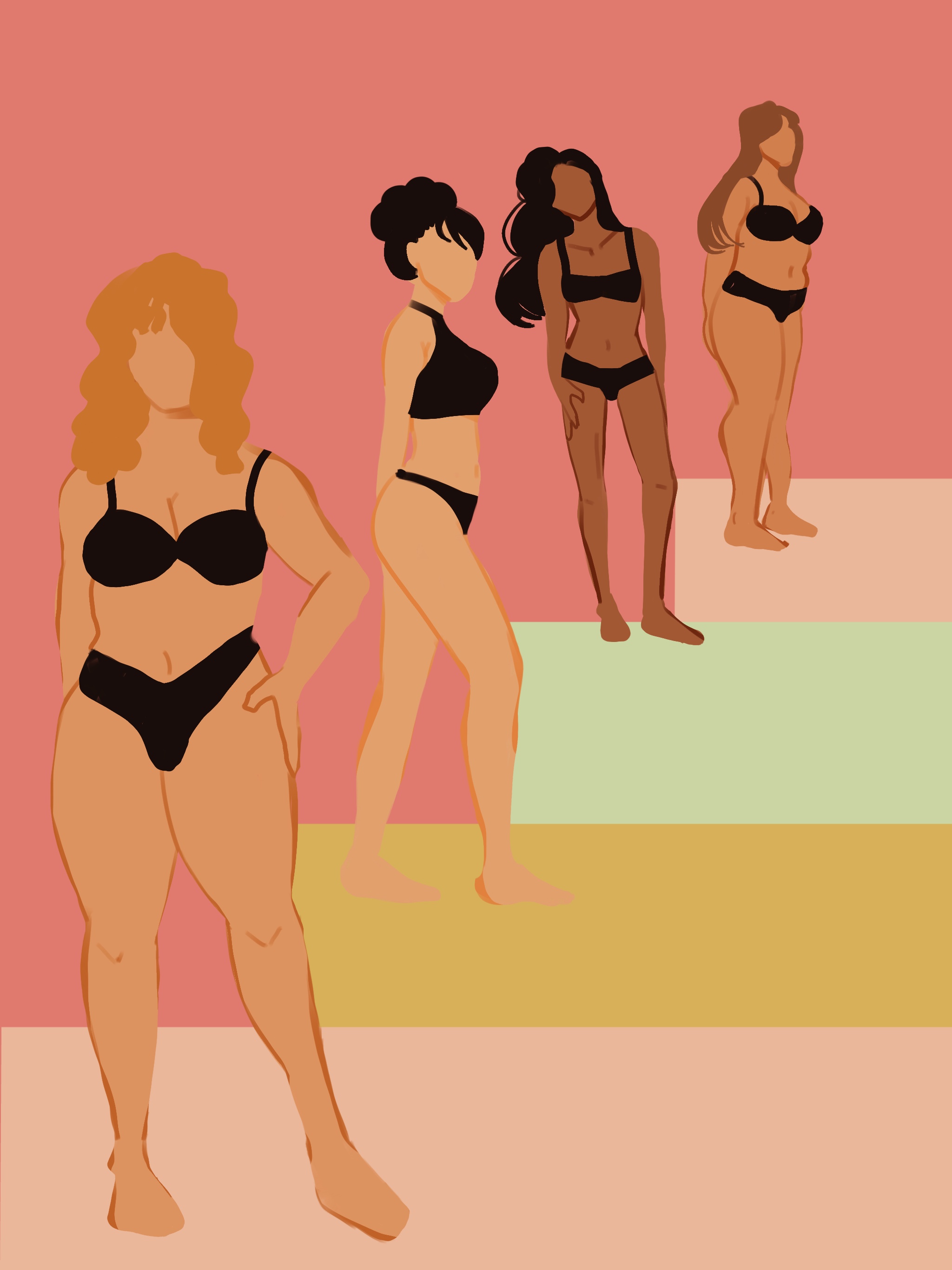 Content Warning: The following article contains discussions of sexual violence and trauma that may be triggering for some readers

The arrival of the Spaniards in Latin America marked the beginning of the exoticization and fetishization of Indigenous people. An obsession with capitalistic gain coupled with a self-proclaimed sense of racial superiority contributed to the dehumanization of people of color and enforcement of Eurocentric beauty standards.

In order to justify their moral transgressions, colonizers created a racial caste system to defend mistreatment towards Indigenous communities and grant themselves immunity for their atrocious acts. By placing Indigenous women in lower tiers within these caste systems, they were viewed as subhuman and stripped from basic respect. As a result, colonizers viewed these women as reproductive tools in a racial war, able to produce a new lineage of mestizas to eradicate Indigenous blood.

This type of treatment, however, continues to be an issue in Latin America as it is advocated by settler colonial governments. In her book, I, Rigoberta Menchú, Indigenous activist Rigoberta Menchú recounts, “I couldn’t bear so many women – hundreds of women, young girls, widows – being pregnant because the soldiers had used them sexually” (167). Menchú is describing how Guatemalan soldiers who raid Indigenous land sexually abuse and forcefully impregnate the women in these communities. In the following pages, Menchú recounts in horrific detail the raids in neighboring villages, where two of the victims were at most 14 years of age. Similar to colonial times, the soldiers who committed these assaults did not face consequences for their actions because their government perpetuates hatred for Black and Indigenous people of color (BIPOC).

Not only did the Spaniards create the racist attitudes which led to the violence Indigenous women face, they also implemented a patriarchal society, another form of oppression for women. By viewing men as superior to women, men were respected more than their female counterparts. This meant that men from lower castes were able to regain a degree of ‘power’ from their oppressors by oppressing the women within their own class. This machista mindset deludes men and continues to pose a risk for women in Latin America. It reinforces gender roles and is apologetic towards domestic violence against women, partially explaining the high rates of femicide currently occurring throughout Latin America.

These colorist, racist, and machista attitudes are not just upheld by the political and social climate in Latin America. In order to perpetuate the idea of white superiority, U.S. and European media represent Latin American countries as underdeveloped—thereby labeling Latinas as being from an exotic land that is taboo for white society. This exoticization has been achieved and reinforced by the creation of the ‘Spicy Latina’ trope. The ‘Spicy Latina’ has a short temper, a thick accent when she speaks English (to signify her foreignness), long hair, large lips, brightly colored clothing, a curvaceous body, and uses her sex appeal to seduce men. This media trope can be reduced to two simple features: Latinas as ‘exotic’ and irrational because of their ethnicity.

In the article, “Brain, Brow, and Booty: Latina Iconicity in U.S. Popular Culture” by Isabel Molina Guzman and Angharda N. Valdivia, the authors note that “sexuality plays a central role in the tropicalization of Latinas through the widely circulated narratives of sexual availability, proficiency, and desirability.” By forcing actresses to portray the colonizer fantasy, the media continues to excessively sexualize women of color. This hyper-sexualization also has the consequence of robbing Latina actresses of the opportunity to be recognized for anything other than their bodies. Thus, reinforcing the idea that whiteness is equated with intelligence and people of color with primal qualities such as sex and aggression.

This type of negative representation is not limited to adult or live-action television as Elizabeth McDade-Montez, Jan Wallander, and Linda Cameron note in their article, “Sexualization in U.S. Latina and White Girls’ Preferred Children’s Television Programs.” The authors point out that a recent “qualitative analysis of heroines from five Disney films revealed that more recent heroines of color (i.e., Jasmine, Pocahontas, and Esmeralda) are more likely to be defined by the sexuality expressed in their physical appearance, dress, and behaviors than are White heroines (i.e., Belle and Ariel).” From a young age, Latinas are forced to view themselves as sexual beings, a struggle other demographics do not face.

Given that ethnic representation is already limited in the media, young Latinas grow up accepting these negative stereotypes about themselves because it is all they are exposed to. These impactful experiences contribute to “decreases in positive body image over time” and other negative mental health issues such as eating disorders. McDade-Montez, Wallander, and Cameron point out that “Disordered eating, which is associated with exposure to sexualized media, disproportionately affects Latina adolescents, who demonstrate higher rates of weight loss efforts and higher lifetime prevalence of binge eating episodes than White adolescents do.” The stereotypical representation Latinas are provided with makes them internalize a belief that to be desirable is to embody this unattainable sexual representation, creating an unhealthy relationship with their self-worth and self-image.

Having these qualities attributed to our ethnicity has created a fetishization where people view Latinas as nothing more than this sexual trope. Since Latinas have been conditioned to equate these stereotypes with desirability, it creates doubt whenever we date outside of our ethnicity. There is a constant worry that your partner is not even attracted to you, they are attracted to what you represent. Latinas are left wondering if they are being dated because of their personality or if it is because they are being ‘typecasted’ by their partner—easily replaced by another Latina.

This type of psychological stress is an issue Robin Zheng discusses in her article “Why Yellow Fever Isn’t Flattering: A Case Against Racial Fetishes” where she discusses the dangers of labeling a racial preference as a ‘preference’ instead of a fetish. She goes on to remark that “whether or not some particular case of racial fetish is caused by an individual’s harboring racial stereotypes at some level, it inevitably has the effect of reinforcing racial stereotypes” (410). So even if a partner with a fetish for Latinas were to argue that they are not racist and it is a mere ‘preference,’ that ‘preference,’ whether they admit it or not, came about because of racist stereotypes subliminally encoded in popular media.

Another negative consequence of this stereotype is that men who believe them begin to view every Latina under the lens of the ‘Spicy Latina.’ They refuse to view a Latina as an intelligent human being, instead viewing her as a sexual object to fulfill their fetish. This reduction contributes to the increased cases of sexual harassment and assault against Latinas. In the Existe Ayuda Fact Sheet compiled by the Office for Victims of Crime (OVC), “77 percent of the Latinas surveyed said that sexual harassment was a major problem in the workplace.” Having been represented so poorly in the media, Latinas face a constant struggle to be respected in their workplace, since they are reduced to their physical attributes.

The matter becomes more complicated when we consider the additional factor of citizenship status. As the OVC points out, “immigrant Latina domestic workers are especially vulnerable to sexual exploitation because they depend on their employers for their livelihood, live in constant fear of being deported, suffer social isolation, and are vulnerable to their employer’s demands.” Being undocumented and disrespected by the legal system means that many suffer in silence and never receive justice for the crimes committed against them. Moreover, being stereotyped as sexually deviant means that even when Latinas do report these types of crimes, they are subjected to victim blaming because their ethnicity has been fetishized. It is clear to see how such labels and power dynamics account for the disproportionate amount of murders and disappearances of Indigenous women by those who internalize this exoticization.

The last issue with the ‘Spicy Latina’ trope is that the actresses and celebrities that are typically hired to embody these stereotypes are White Latinas: Latinas that are either completely or mostly of European descent. Considering that Latinx is an ethnicity, there are people of different races and backgrounds. Therefore, when our representation is limited to a specific demographic, we exclude all other Latinas. This makes girls grow up feeling inadequate if they do not look like the people who are supposed to represent their community.

Fetishes are not mere preferences. They have real consequences for the members of the community they target. Latinas have had to deal with negative mental health, psychological doubt, sexual trauma, gendered violence, and more simply because they deviate from the white sexual standard and are ‘exotic.’ It is time for people to reevaluate their dating ‘preferences’ and recognize the racism that underlies their fetishes and the dangers they pose to those affected.

Beauty of Color
Scroll to top