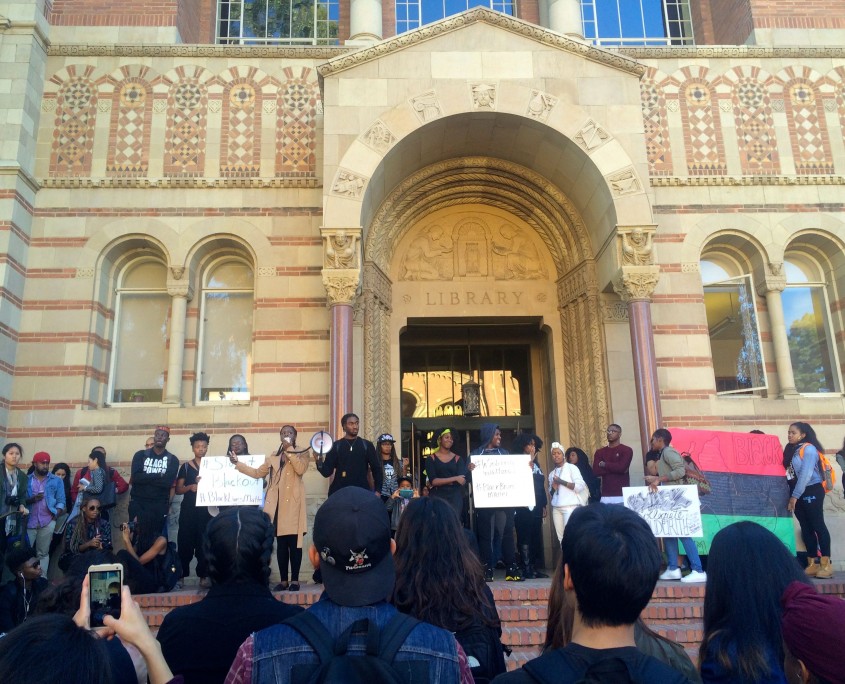 On November 13th, Black Bruins participated in the national call for action in solidarity with black students at the University of Missouri. All students, faculty and allies met between Royce and Powell at 1pm for a rally led by the Afrikan Student Union.

For months, Mizzou protested a lack of action by administration regarding explicit racially charged and unjust events. A lack of response to the demands led to an eight day hunger strike by graduate student Jonathan Butler and the football team’s refusal to play until the school’s president, Tim Wolfe, stepped down. Following the resignation of Tim Wolfe and these series of events, black students’ lives were threatened with violence, prompting many to leave campus.

The Afrikan Student Union released a statement of solidarity with the students of the University of Missouri. Additionally, they stated their own demands towards the University of California, Los Angeles. These demands were made following the Sigma Phi Epsilon Fraternity and Alpha Phi Sorority, “Kanye Western” themed party where attendees wore blackface and mocked black culture.

The rally was held in protest of racism and anti-blackness on campuses across the nation. Students, faculty and others gathered in the main entrance of Powell Library to listen to Black community members who have felt oppression at UCLA. Many held signs that stated phrases such as “Black Bruins in Solidarity with Mizzou” and “#StudentBlackout.” Protesters listened to what their classmates and professors had to say, while occasionally breaking into chants and applause.

Through the use of awareness, solidarity campaigns and protest, concerned students hope to address the systemic racism within our schools, and our community.