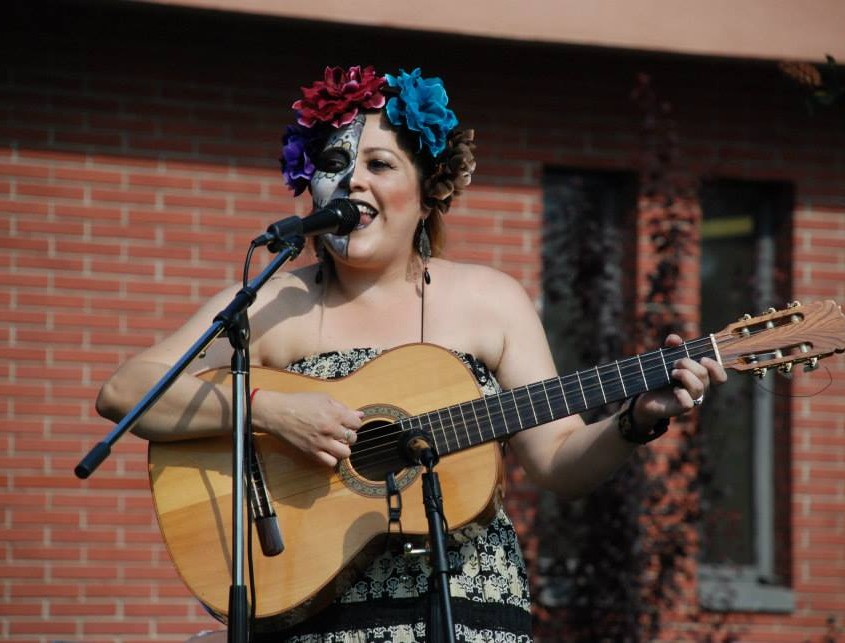 Their music evokes nostalgia and tastes like Mexico with a multicultural twist. “¡Pónganse a bailar! C’mon, guys, dance!” yells the guitarist cheerfully as they smoothly transition from “Guantanamera” to “Twist and Shout.” Renown rock-and-roll songs, contemporary songs like “All About That Bass” and the Latin classic “La Bamba” are interwoven with old-fashioned rancheras.

Formed in 2005 by Vicky Olvera, Raymond “Ray” Sanchez, and Veronica Ibarra, Son de Kalavera has become a symbol of cultural, generational, and musical unity. Their repertoire is composed of songs from a myriad of genres and generations.

In their childhood, they were surrounded by various genres of music. They were brought up listening to Javier Solis, The Temptations, and everything in between.

“I grew up listening to Doo-Wop,” Ray Sanchez recalls. “I wouldn’t be able to choose a favorite genre. I like them all!”

The environment they grew up in fostered their affinity for a myriad of different musical forms.

“Fregoso took us deeper into what mariachi music is,” says Veronica Ibarra.” “He brought older songs that aren’t played anymore. He introduced us to another side of mariachi music, one different from what one usually listens to like ‘El Mariachi Loco’ and ‘Volver Volver’. Vicente Fernandez is a big influence for me, but there are songs written way before him that aren’t really listened to.”

Son de Kalavera has received a large amount of appreciation for playing songs from Revolutionary Mexico and the Golden Age of Mexican Cinema, inspiring nostalgia in their audience. For guitarist Vicky Olvera, one of the greatest rewards as a musician is the ability to transport her audience back in time and to see the smiles on their faces as they recall pleasant memories.

Throughout the 15 years they’ve played together, they’ve had very unique experiences. As part of a half-time show for a soccer game at the Rose Bowl in 2008, they helped break the world record for most mariachi musicians playing at the same time. They’ve also performed at a sold-out concert with Marco Antonio Solis and Joan Sebastian.

This experience was very important to Veronica Ibarra on a personal level.

“My grandma was a big person in my life,” she says “and Marco Antonio Solis was like her boyfriend. She would call her grandkids her ‘bukis’. By that time, she had already passed away. It meant a lot to me.”

Perhaps their most interesting experience was being hired to play for an event they were told was to be a party. When they arrived, they were instructed to stand in front of lifesize statue of Malverde, the narco-saint, and sing to him. Around them were altars, offerings, and men walking around in robes.

“We were just playing our music to this statue,” remembers Vicky Olvera. “I think that was the weirdest. I remember we were all terrified.”

Son de Kalavera’s music is in a melting pot, a tribute to multiculturality.

“It’s not just about the Mexican side of us,” Veronica Ibarra explains. “It’s about everything else, too.”

Being equally exposed to Mexican and American culture, the two go hand in hand in both their musical careers and personal lives.

The name of their trio speaks of a universal truth: somos de calavera.

“Son de Kalavera,” Vicky Olvera explains, “means that underneath it all, regardless of color, race, sexual preference, or religion, we’re all skeletons underneath. Somos de calavera. We’re all the same. Somos lo mismo.”