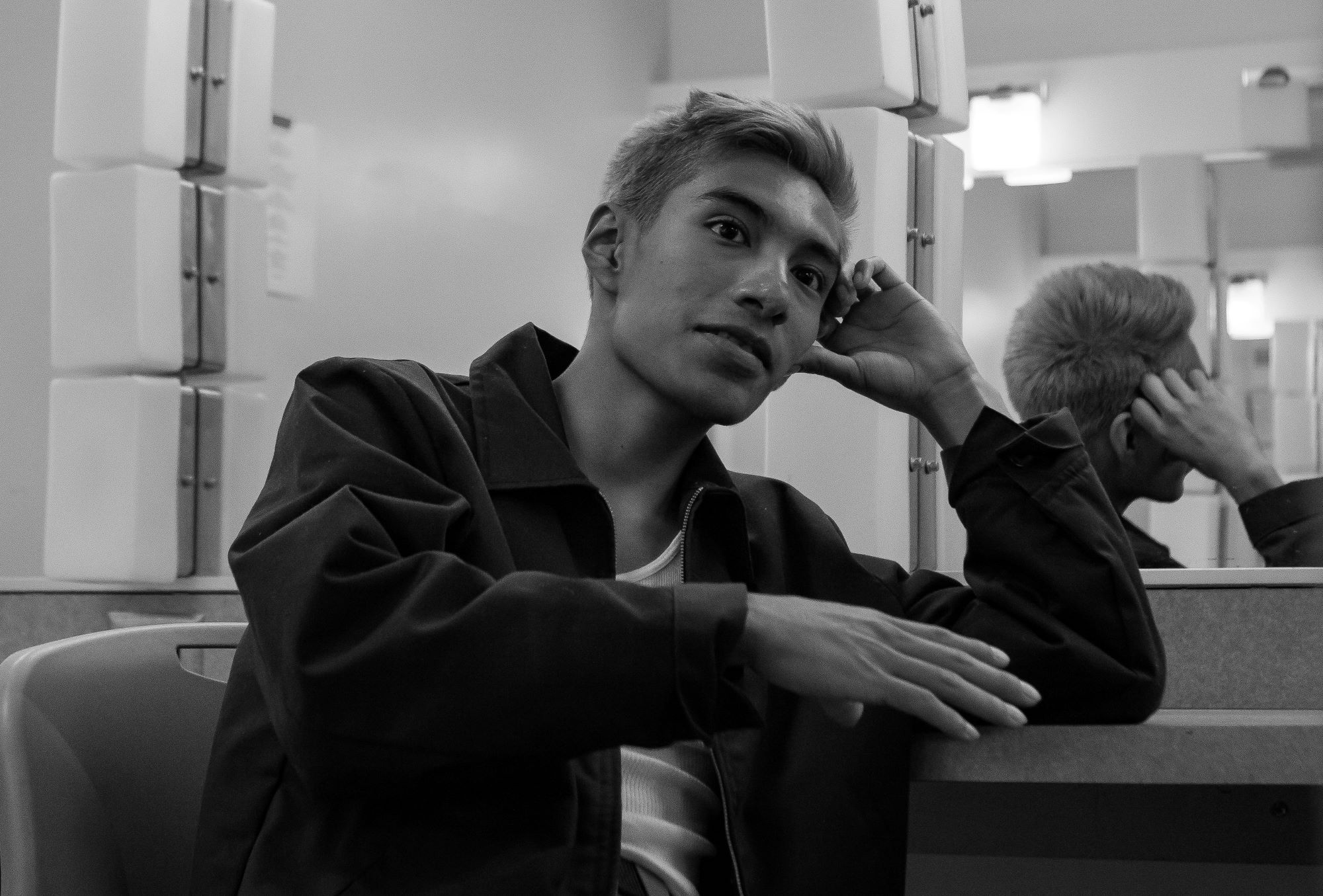 Updated @ 6:50 pm: La Gente does not condone the use of the term, ‘colored’, nor the violent history attached to the term.

Along with new, up-and-coming Latinx artists hitting the charts, Jasper Bones has made his presence known with raw, funky, and wavy soul tracks. The young solo artist, at just 20, has melted the hearts of thousands of individuals creating an enormous fan base that call themselves “Boners”. With mellow lyrics that can cure any heartache, Jasper Bones talks to us about his personal experiences about the evolution of the latinx art scene and music. Join us as we learn more about this LA-based artists’ life in lyrics and beats.

Moments before Jasper Bones opened for The Marías at UCLA’s Royce Hall on Wednesday, May 29th, Xochilt Chavez and Melissa Díaz had the opportunity to speak to him about his identity and growth as a Latinx artist.

MD: Okay, so the first question I have for you is how you believe the Latinx art scene and music scene evolved when you first started performing and how it is now?

JB: I feel like the scene is just more common.  I feel like the scene itself is more cool. When I was playing in bands from middle school through high school there was just not really a lot of brown or colored artists [artists of color] really in the local scene at all.  I feel like doing music myself has been me just learning as I go. Honestly, when I started I wasn’t thinking like, “okay, I’m going to be an influencer in this Latin, whatever, movement.” I don’t like to use the word movement sometimes because it makes it seem temporary. 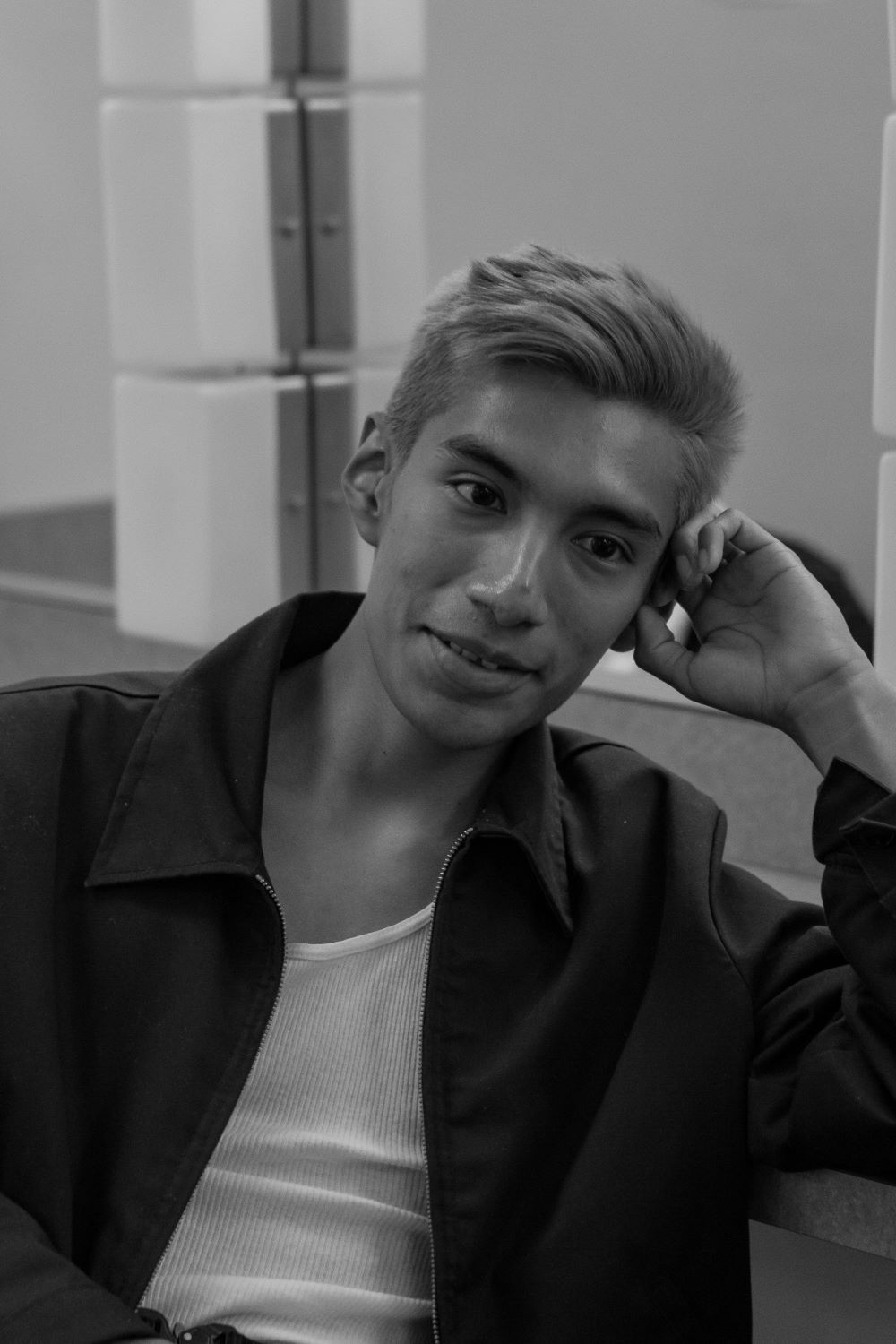 JB: This is something that is definitely going to stick around, and we’re like, working hard so that it is permanent. But, yeah. I guess that’s one of the biggest things. It’s become more permanent and less temporary. And just like, I don’t know. I think it’s so cool – it’s probably one of the biggest compliments I’ve gotten – when people are talking about how it’s nice seeing somebody that like, has a similar image as themself.  I didn’t have that when I was in middle school or high school, like going to shows and stuff. When somebody tells me that it goes a long way and I hold it really close to my heart because I just can’t imagine being that for somebody. It’s a lot of pressure sometimes because I’m still learning, like I said, as I go but I love it. It’s helped me learn and be way more proud of my culture and everything about it.

XC: How did you create your own space for this Latinx music community?  What would you recommend now for people trying to pursue the same thing?

MD:  Adding on to that thought, I play music too and I don’t want to be a professional musician, but I am aware of how it’s very hard to find people with similar identities in the music scene, so how would you go about approaching that reality?

JB: That’s the thing. I’m speaking for myself when I say this, and I know my other peers and other musicians feel this. We all talk about how we want to see more people of color in literally all types of art and every single type of genre of music, anything; we could do it all.   That’s the thing. That’s kind of one of the biggest challenges now. I’m a second-gen, so like, the challenge is explaining how I’m either too Americanized or too traditionally Mexican or Guatemalan for American society. I feel like the more we reach out to each other and work as a community to make sure it’s totally okay to do this kind of art or music or whatever, and that we in fact welcome it and want to see more of that is what’s important.  Yeah, I think just as a community we just have to keep reminding ourselves that it’s okay to do whatever type of art we want or pursue any type of career we want; it’s definitely possible. 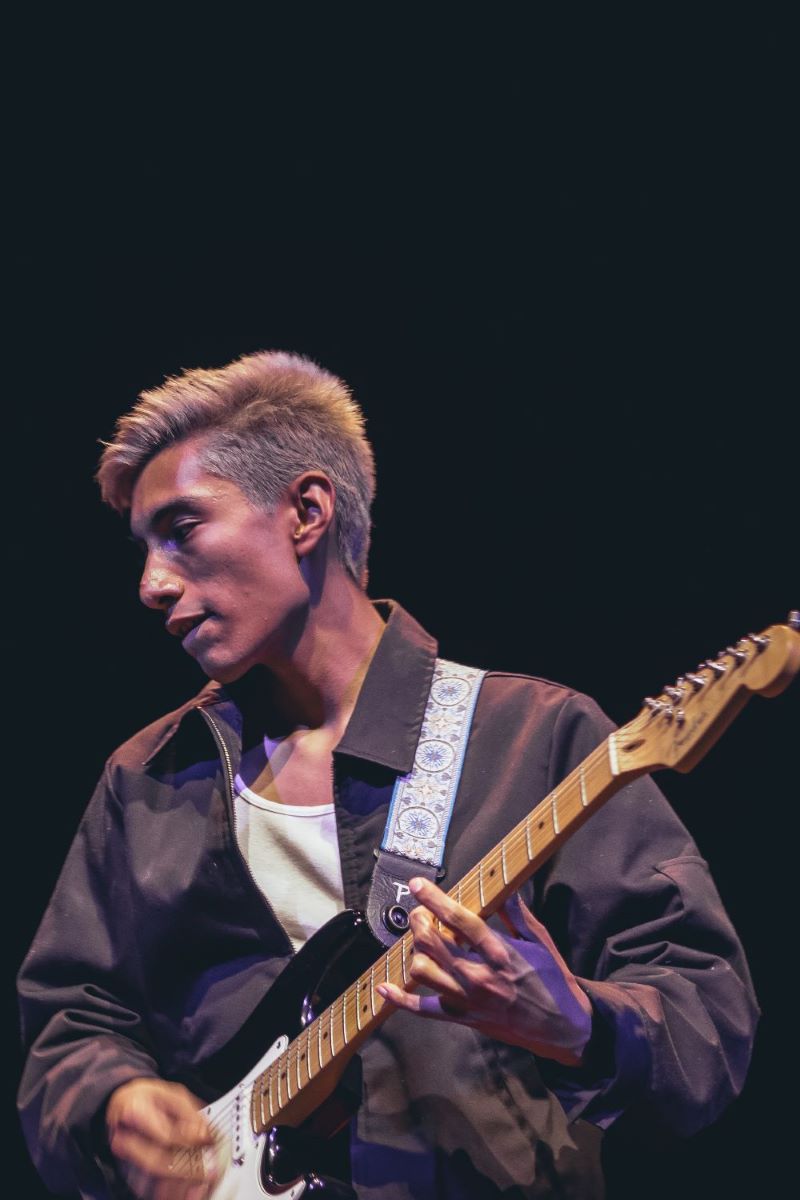 JB: I feel like one of the biggest things that definitely got me more plugged into my community is through my management, and just through social media, honestly. I started off doing Twitter cover videos. I remember one of the earliest artists I did one of was Cuco.  We became social media homies and then I started going to his shows. I was like, “damn, this kid is like really doing it.” I was like, really proud of his whole network and this whole family that he built up. I’m super grateful that the management – Mija Management – was welcoming to me with open arms. It helped me find this space when I was previously uninformed about it, like I said, playing with other bands growing up and stuff. I wasn’t sure where to start looking.  Yeah, I think the power comes from social media and like I said, through connecting with each other and supporting everything that we do through art, music, and whatever it is. It’s just totally okay, it’s all definitely possible.

XC:  Cool, so building off of that- you’re talking about how it all started for you with social media.  I’m wondering how it become real life now and how those connections are in real life after social media?

JB: Yeah.  Honestly, just playing shows and releasing more music.  I feel like last year I toured and I was travelling for a while.  I didn’t have as much time to write, so this year I’m trying to spend the first half of it just writing and writing and writing because that’s the tangible stuff.  Shows are fun, of course, but it’s like, on one day or night you just play a show and you’re gone. The actual stuff I put out and want to have sitting there for however long is the actual tangible stuff that people can connect to or whatever.  That’s what makes it real for me. Honestly, I make music that I just enjoy; I do it based off what I like to listen to. I’m like, “in this song there are elements of this that I listened to growing up.” Yeah, I feel like the real part is when people gravitate towards it and really connect with it.  It’s a nice little reminder that I’m doing something right. If somebody is able to connect to it and I was just doing this for myself, essentially, then it’s like, yeah, a big thing. That’s what has made it more real. It’s through the songs that I put out and like, when people are able to attach themselves or relate to it.  It’s really through people that listen to my music that make it real for me. Otherwise, I’d be posting it to nobody. 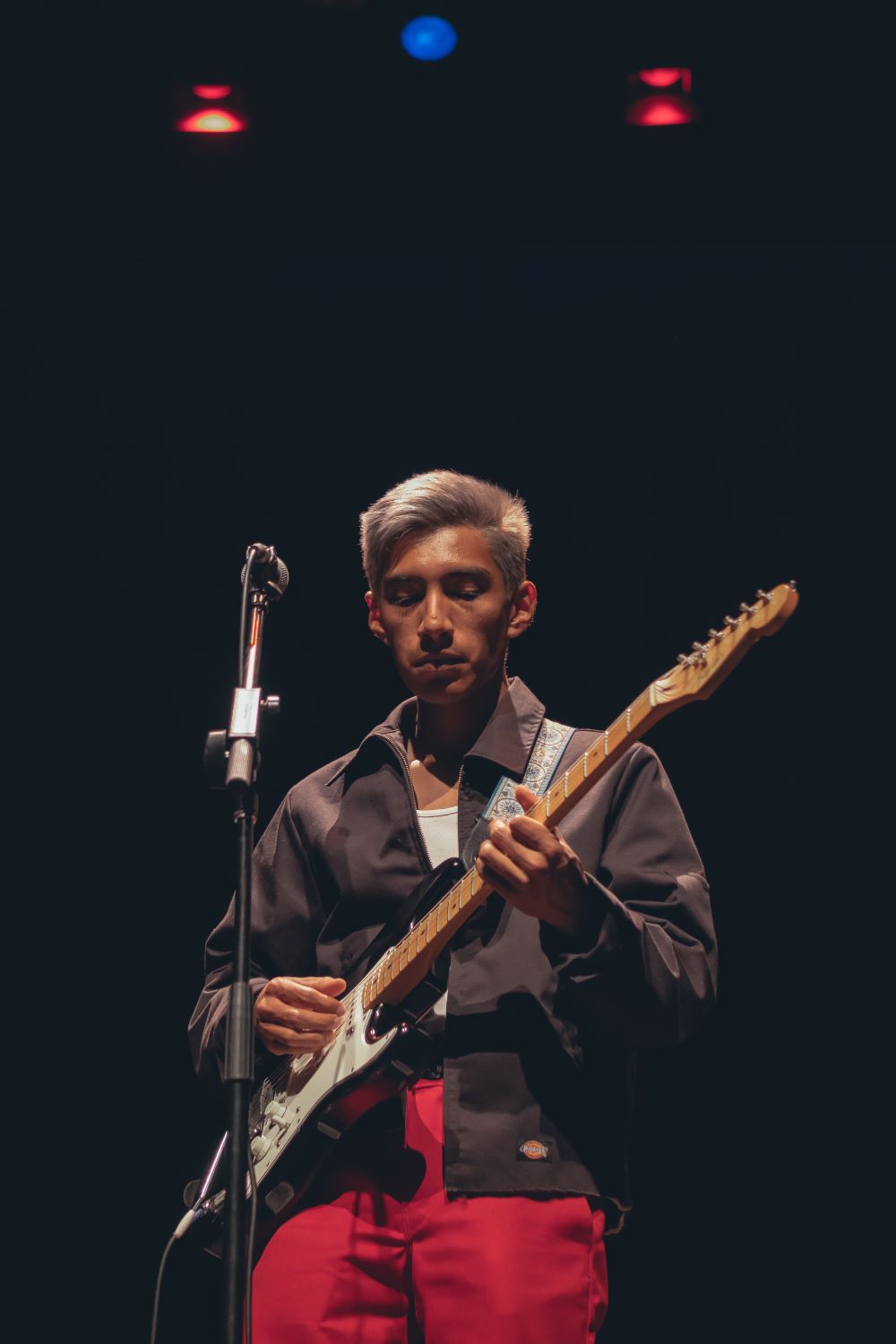 MD: I was wondering if you became involved going to shows in your local music scene, and if so, did you ever feel discouraged seeing predominantly white bands? How did you move past that barrier or discouragement?

JB: Yeah, no definitely.  Adding on to what I was saying earlier, that scene is what I grew up on.  Actually, it’s funny. I went to a public elementary school and I was doing pretty well there so I did this summer program at a private school.  Then, my parents somehow managed to get financial aid and everything so I was able to go to a private school for middle and high school since the schools in my area weren’t the best.  The schools were predominately white, and those were some of the most awkward times. I admit, I felt really whitewashed. I felt myself suppressing my culture and suppressing everything at home.  I would even realize that my relationship with my parents was sort of starting to, I don’t know, flutter? I don’t know. I was split between two different worlds. I love my family, of course, but I’m also being judged for that at school so I was trying to hide that.  It was too much. After high school, I decided to fully embark on appreciating myself and self-love, as cheesy as it sounds. It something we all have to actively practice and actively think about it. It’s something I still struggle with. It’s so tiring having to actively think about having a good day or embracing everything as much as you can.  It takes a lot of energy. 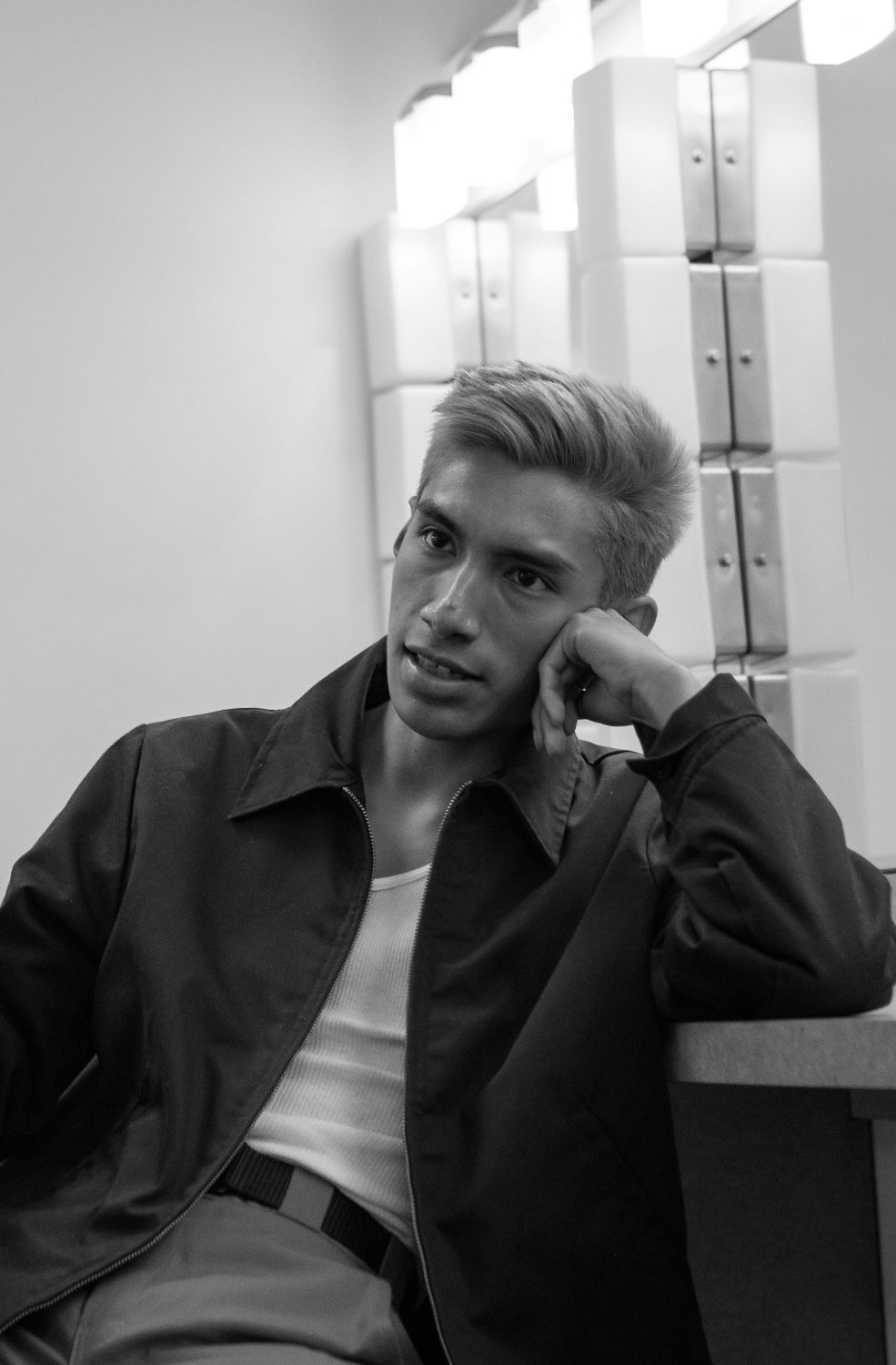 JB:  Yeah.  There were definitely times where I was super discouraged about that.  I guess at some point no one necessarily told me to stop being suppressive of my culture.  It was just myself. One day it all clicked. At some point you have to realize no matter how hard you try – if you do try to be whitewashed – white people are always going to look at you differently.  You’re never going to be equally as white or as “Americanized.” There’s nothing wrong with that. Instead of being like, “damn, I can’t fit in with y’all,” I was like “I don’t need to fit in with y’all because I have my own community.”  That’s something we all have to work on. It was a weird point in my life where it started off as discouragement, but I learned to use that as encouragement and realize “okay, why am I being so fake to myself?” If I just stay true to myself and my family and my culture and everything, I’ll just live a happier life like that.

XC:  Definitely.  Okay, cool. That’s all we have for you.  Thank you so much!

MD:  Thank you so much for your time, have a great show!

Catch his Tropicalia performance on Sunday, November 10 at the Pomona Fairplex!

The United States’ Nativist Tone is Neither New nor Unique