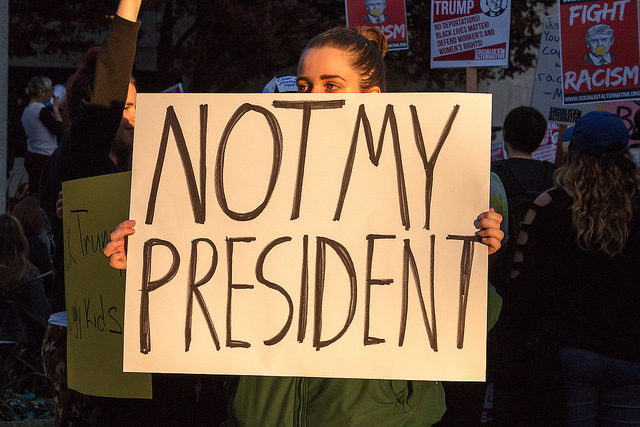 Within a few hours, Donald Trump will be inaugurated as the 45th president of the United States. La Gente’s staff reflects on their initial reactions to Trump’s unexpected victory.

I’ll be honest: I cried. It wasn’t so much for myself, but it was for the millions who live in states that don’t protect human rights. I cried for the people who will not have the support Californians have shown each other. I cried because I can imagine fathers, mothers, children, etc. living each second in fear, hiding in some small, enclosed room, praying not to be prey. It isn’t just immigrants who are being targeted: it’s everyone. So, no, I wasn’t too happy about the results.

When I first realized who the new president was going to be I was devastated. I kept hoping that what was on the screen would change but it never did. My heart was broken and I began to cry. I couldn’t believe that somebody who had continuously shown so much hate was elected as America’s president.

Was this really what most of the country felt? Did the country I was born in hate me and others like me? My parents came here in search of a better life and have worked hard ever since. Was this how America was repaying them?

I couldn’t help but feel anger, fear and, sadness. I spent the first few days trying to cope and kept myself informed. It didn’t take long before I started to see people mobilizing and start protesting.

I was happy to see that many people did not agree with the hate and were willing to protect their communities. This gave me hope. I have spent time ever since trying to keep myself and others informed about our resources and the actions we can take to prevent policies that take away our rights. It is up to us to protect our rights and make sure this administration knows we matter and that are powerful.

I’m surprised and worried. When Donald Trump first began his campaign a lot of people took it as a joke. They argued that there was no possibility of him winning the Republican party’s nomination, that America wasn’t that stupid.

He obtained the nomination.

The skepticism is now aimed at his proposed actions of deporting millions of humans across the border. Now we hear “There’s no way he’ll deport those people.” But what Donald Trump shows us is that no matter how much we deny him, he has a record of getting shit done, he’s not a joke.

It’s time to brush off the denial and prepare ourselves for the political disarray to come. There is no time for skepticism. America has elected a man that embodies everything the political left fights against and it’s time for all of Trump’s detractors to organize if we want to oppose this presidential administration.

When I walked into my room, my roommate was watching the election livestream. All I wanted to do was take a nap and have the election be over, but it was too late. The race was over and all I could do was cry in my bed.

When Trump started talking, I felt such strong emotions towards everything that it made me physically ill. I didn’t call my parents because I didn’t know what to say to them. When I saw my dad again, I just hugged him and we stayed silent.

I think what really helped was the rally that started happening right after he won, but what made it worse was when I looked at social media. I couldn’t go online without feeling those strong emotions. One of my professors has us think of how this new presidency might shape our history and how the past can teach us how to overcome future obstacles.

All I want to do is fight back, but I find everything so draining. Some people are like, “Get over it.” But from now on, I will wake up every morning fearful that my community and I are at risk.

My professor described the results of this past election as a “political earthquake.”

You see, we never really see the earthquake coming. Looking back to that morning, I remember feeling so confident about Clinton’s success. Later that night, as the results poured in, I felt as if I was dreaming. I felt fear. I was scared of the uncertainty.

You disgust us. Every fiber in our collective being revolts against you. Everything about you screams phony from your “Cheeto” tan to your sickening campaign slogan. Though you are blinded by hate and your deep-seated fears, we are clear-eyed and ready fight you. EVERY. STEP. OF. THE. WAY.

November 8, 7:43 P.M. I receive an optimistic “Ya vote mija” text. My mom’s enthusiasm for voting relieves the pain I can feel beginning to drill a hole in my head, as I worry about how awfully this night can end. I carry on with whatever distraction has topped my agenda for the hour.

9:22 P.M. I receive a melancholic “Perdio Hillary” text. I assure my mom that it will be hours before we can be sure, but as the hours go on I lose hope for the milagro we had prayed for.

11:00 P.M. My roommates and I are in a state of disbelief. No amount of cussing, groaning, or Tweeting can express the disappointment I feel.  This is not the America my mother voted for.

November 9, 12:07 A.M. The Daily Bruin tweets about a giant student protest headed toward Westwood. Frustrated and hopeless, I head out with my roommate, and we chase down a crowd of equally disillusioned youngsters and chant alongside them. Nothing may change as we wave our Mexican flags in the air, but this cathartic experience is the only comfort we may feel tonight.

November 23, 7:22 P.M. My city looks the same, but it is also somehow uglier, as I see the world in its most grotesque form. Leaves invade the sidewalk and remind me of the quick passage of time. I yearn for the next four years to breeze by like the blur that is November 2016.

It saddens me to see the brokenness within each and every one of us since you were elected. I am now aware of the fear and uncertainty in my people’s heart.

Money and Conflict. I see a division that is very wide, and you as a leader are responsible to care for everyone living here, yet you create more division with hateful comments.

I see a family that fears for the day that their benefits will be cut off. A family that fears being separated. I see people divided over issues of race, politics, and ideologies. Despite this brokenness, I know that we as a people will emerge from the brokenness. We will rise and this brokenness gives me hope for the day will be at peace with one another. The first step began when you awakened us. Thank you for letting us become aware of the broken world; now we are awake and can take steps to change it.

One year ago I sat in my classroom in Mexico City.

We watched Trump’s speeches and analyzed the rhetoric that he used to motivate Americans to vote for him. We sat awestruck as he called Mexicans “rapists” and “criminals,” questioning how someone could maintain such a fixated and stereotypical view of migrants in 2016.

As Trump began to gain more popularity, my peers and I helplessly sat watching the creation of more and more hateful opinions about Mexicans. One year later, as I settled comfortably into my new life at UCLA, I was somehow convinced that Hillary Clinton would win the election. I was convinced that even though Donald Trump had rallied such a massive amount of support, that his inhumane proposals would prevent him from winning the election.

Nevertheless, as I sat with the rest of my Latino friends on November 8th watching the election unfold, I began to understand that the outcome of the election was not going to be the one that I expected nor wanted. I returned to my room at night only to hear students screaming and banging on doors in response to the election results. As I watched a group of angry students make their way to a demonstration in Westwood, I envisioned how normal it would be to see this type of behavior in Mexico. Still, it became clear that the United States was about to change drastically.

Watching the election results come in, I was hurt because I kept thinking about my dad, who voted for the very first time in this election and was so excited but now, it seems, that the country he tries hard to be part of doesn’t want him.  But now that the time has passed, I am no longer hurt I am angry and I choose to fight against the national path so many people voted for.

Because I know that the country that I live in is so much greater than what our president-elect and the people who voted for him believe.

Like so many others, on the morning of the election I was certain Hillary Clinton would be victorious. I’d mailed in my ballot a few days earlier, proudly wore my “I Voted” sticker, and eagerly anticipated hearing of Trump’s defeat.

Instead of celebrating the defeat of hatred, misogyny, racism, sexism, ableism, and the normalization of sexual violence, I cried.

The days following the election were eerie and haunting; however, I quickly found strength. Bumping into friends on campus, we all made sure everyone was okay. Professors allowed for discussion and expressed support for their students.

Despite the horrifying election results, I found further beauty within my communities.

When I found out Trump was elected president, my initial reaction was shock; I could not believe that this racist, xenophobic, misogynistic man was going to represent me as my leader.

I felt a surge of emotions at the same time: scared for my undocumented mother, anger and concern for the ways women would now be treated, and most importantly disillusioned with this country. I knew this country was rooted in hatred and racism but could not believe that so much hate was still in people’s hearts throughout this election.

I was upset and went outside my dorm to protest that night in Westwood. I felt sane to know that many people were just as upset as me. I knew my feelings were shared by countless others and that made me feel okay again. I just hope that Trump is a man that can lead us to a better future.

I was sitting in a room during a meeting of one of the organizations I am involved with. A quick look at the states Trump was winning was a very scary and real feeling that was met with a strong sense of disconnect.

But my meeting went on and everyone’s energies were felt in the room. After the meeting, I could do nothing but process what happened, understanding that real systemic racism was now blatant.

But I knew from the start that work in addressing, unpacking, and contesting these systems of oppression would not stop.

Now, birthed from the flames of white supremacy, we’ve obtained an incentive to continue to work toward our liberation and self-determination as a Raza.

Press Release: Mass Walkout and Strikes at University of California

Avoiding Complacency: How to Get Involved and Make a Difference
Scroll to top