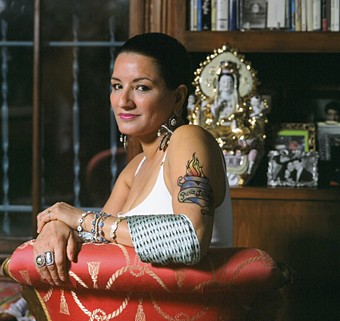 Missed Sandra Cisneros at the Los Angeles Central Library with award winning author Reyna Grande? No worries, La Gente’s got you covered with some of the highlights of the interview and Q&A! In her esteemed and always heartfelt voice, Cisneros opened up about her upbringing in Chicago, the struggles of being a bilingual citizen and literary writer, as well as her relationship with her mother, men, typewriters, and the many houses she has tried to call her own.

Cisneros is currently on a book tour for her new memoir, A House of My Own, a delving into 30 plus years of her life as a child, daughter, critically acclaimed writer and Mexican-American pocha living on both sides of the border. Her works have been translated into more than 20 languages and is considered one of the most important literary figures of the late 20th century.

On Cisneros’s Process as a Writer:

“When you publish a book, the journalist asks you, ‘Why did it take you ten years to write this book since your last book’, and you think, was it 10 years? What was I doing?’ They think you’re working on one thing at a time but you have lots of kettles on the stove. So sometimes when I feel sad I’ll write a poem, or if my back hurts I write a story about a woman whose back hurts, ya know. I do things like that; I’m always doing different things. And I don’t know how other writers work; everyone’s process is mysterious. But for me I work on different things at the same time.”

About Growing Up –Adolescence and Men:

“You know, when it comes to surprises, I look back and… what a pendeja I used to be! I had no idea! Damnit! You know you’re in your twenties and you have no sense of your power, have no sense… you’re just an idiot. Wow! The horrible thing is that, for me, my adolescence started at 21, some women’s adolescence starts in 5th grade, and mine started in my twenties. But that period when I was a prime target for men… the twenties are very hard for women because you’re always trying to please all these guys. And I remember, I had no sense of myself. I couldn’t look in the mirror. I had to look at see if… I had power over men. And that’s such a wrong way to think. You don’t really ask yourself, what do I want that’s going to make me happier? What do I need? You’re always trying to please your father, or your church, or the state, or the culture you came from, and then it makes for a lot of heartbreak for yourself. I guess I don’t know how this person survived…”

On the Different Types of Poor People

“For me, I’ve always been indelibly linked with writing about houses. I really did have experiences with dealing with places that we rented for a long time. Usually the places that we rented were about $50 a month, affordable. And you know, these were very beautiful buildings made of brownstone or something… buildings that were going to be demolished: It was in neighborhoods that were always destined for urban renewal. And subsequently, landlords wouldn’t put any money on it, so on the outside it looked like a dump but inside my mother and father, like many people… You know…there’s two different kinds of poor people, many more than that, but you did have the proud poor that painted their houses with whatever resources they had, they put geraniums in an aluminum can and decorate it. Then, you had people who carried a lot of grief on their back and they’ve been abused and you can tell in their house. It’s scary, and the blinds are all crooked and they can’t get out of their depression or their addictions and, you know we had the house that was the former.

On Living as a Pocha in Mexico:

On Her and Latinx Literature:

“When I was young I was writing I was looking too for [Latinx writers like me], and the writers I found were old, they were men. They were the only ones translated; I didn’t know women wrote until later. So I was reading Garcia-Marquez, Jorge Luis Borges, … but I also found that there were other people that spoke to me. Not just Latin American writers, I would inadvertently find writers like Dorothy Allison, you know, a working class lesbian writer from the South, and she spoke to me and my poverty. And then I’d read about some gay male writer, he spoke to me. So sometimes, you’re never going to know where you’re going to find that voice, but I’ve always been searching. I’m always looking on the margins for that… Japanese American writer who writes about living in Georgia. A little bit of hybridization… its those writers who tend to give me permission to write. And I still, now, I don’t want to read the bestsellers, I’m sure they’re fine, but all books are medicine and everyone’s subscription is different. So I’m always looking for those writers who give me a new way to write and give me permission to go beyond my reach and nurture.”

Sandra Cisneros will be touring the U.S. in support of new memoir. Like what you just read? Want to know more about Cisneros as an artist or a person? Want to explore your own literary Spanglish contradictions? Pick up a copy of A House of My Own!