For Mama and mi Tio

“Show me a man who lives alone and has a perpetually clean kitchen, and 8 times out of 9 I’ll show you a man with detestable spiritual qualities”

An account of a young 24 year old Latina releasing herself from the chains of the absent father and of his crude world and in her search for healing. 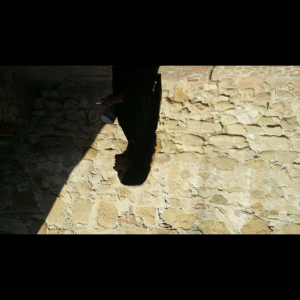 ON HER FRONT DOOR ON HER STOOP – EARLY AFTERNOON

She shuffled impatiently through the pockets of her black hoodie.

ON A LIVE WIRE UP OFF THE STREET…

(She stands licking her lips on the traffic intersection)

She pulls out her inhaler. She thinks what a real horror show it would be if she misplaced it. The dependency on it cripples her, should she find herself losing it.

She struggles a bit to harness her Siberian Husky. She manages and takes his leash. She walks to her alley heavy-headed where her white Toyota is parked.

(key in the ignition)

She glances through her rear-view mirror until her dog settles at his favorite spot next to the window where she had left a small opening for him to entertain throughout the ride.An air of anticipation is felt but a memory, maybe it is more like a sensation, maybe melancholy takes hold.

(it jolts her suddenly)

Whatever it is, the sensation is familiiar, persistent, unwanted.

(she twists the volume knob and RADIOHEAD’S “Karma Police” plays)

INT. SKATE-PARK- ON THE CURBSIDE

When the sky cannot decide to be mesmerizing blue or dazzling gold. The dueling of the skies above her at six in the evening. 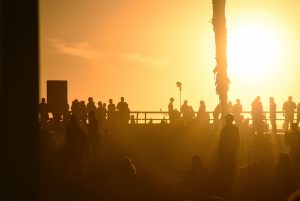 (She continues to sit at the curbside scrolling through her playlist)

In controlled symmetry, she unwinds her earphones.

She gets too caught up with deciding what album to play.

She scrolls, scrolls, and scrolls.

She has been sitting on the hard concrete for minutes now a creeping numbness takes hold of her. Feet first, her legs solidify on the curb.

She remains there. She eyes the ocean, the sky, the people who now have faded in the in-between. You know when the earth’s natural light and warm glow becomes replaced with the artificial. 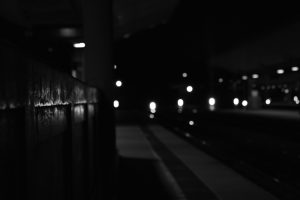 (it is approximately 8:00 PM, light posts light up)

She suddenly finds it hard to breathe….

Suddenly relevant, one puff, three puffs for the fear,

Girl head pendulous over the cupboard,

She tucks her feelings into a ziplock in the back pockets of her jeans,

Girl head pendulous over her knees, holds agitation of head

She don’t give courtesy to the concrete,

eyelids encapsulated that hang low, how low, why low?

In the certain demise of her lungs as

she kicks away at the eyes below her but the eyes dead ahead subdue her.

She curls, she expands, as she contemplates the hanging why’s of her eyes.

She is in retrograde.

But she remembers God only pricks, right?

INT. HER TIO SITS ON THE CURB WITH HER- NIGHT

“A rush of blood to the head said led to your death, but see I saw the soul glitch. Do you know unhappiness? How it pains?”

“It lies simple and heavily on the soul, mija.”

“Do you think of her often, sometimes, every day?”

“See the heartache carries you to the bottle but they never understood me.”

“In how many ways did they fantasize your death at the curbside? See your friend came knocking at our door with honest words…”

he sits silently (beside her)

“I saw the soul glitch in you. Alcohol plus you plus bottle did not equal you.

“How many disdained your ways? What happened? Why did you let your head fall to the concrete?”

(She turns to find him gone)

“I miss you the most. Will I find you under the guava tree?”

(her legs lift her to her feet)

She gets into her car and drives away.

but he remains a lost confidant and sensitive in the ways she is.

“Where is my father?

In another home or maybe in that corner restaurant by my mothers home….

Who is my father?

My father is the creased up couch with chewed up David sunflower seeds in between the cracks you know where someone has been sitting on for days, my father is me everytime I look into the mirror to the nose that demarcates me from my sister.

Why is he my father?

To realize I am composed of something else.”

“Daddy, daddy you bastard I’m through!”

She cannot gauge her fears. She drives down familiar streets.

“I’d rather chip my pride, than lose my mind out here”

She comes up to the corner of Wilmington Avenue and PCH, the neon Coin Laundry is lit up and she contemplates the connection…

(night ride in a contemplative mode)

She remembers driving in her mother’s 1979 orange Z-28 Chevy at thirteen and stretching her head up to the window with anticipating eyes to find her uncle exiting the Coin Laundry as he walks out with a crinkled black plastic bag concealing his most meticulous effort and the cleanest whites folded neatly in his bag. She remembers how he curled up in the passenger seat because his knees would always hit the dashboard.

(a smile came to her)

She felt a comfort to find him in the passenger seat where she could nudge the seat and he would turn and share a glorious smile.

She would continue to meet her uncle at laundromats, gas stations, and parks as the years went by in his best attire which was assembled by a white tee tucked in blue faded jeans and how his jeans were always short above his ankle exposing whiter socks than his sneakers.

(she manages a laugh)

She revelled in the simplicity of her uncle’s attire because it rendered a simple man . His washed out hat that tucked away his auburn blond hair, as mama and I

waited for him day after day,

as he trailed off

into the streets in a Bukowski crisp, free verse

(she pulls into the Coin Laundry  parking lot for a second)

In those multiple car rides

as she sat in the backseat

she came to realize how pride took form

and how pride and the bottle were synonymous to her uncle.

Far from the bottle, her uncle she thought was her confidant her equal in the matters of solitude where under the guava tree in mama’s backyard he spoke about life to her at thirteen.

She enters the kitchen door to find mama busy at the stove, el arroz frying and the meat boiling in a delicious aroma as she paces back and forth between the news and the meal at hand.

Everything lively and mama tuned into Univision news where matters of presidential idiocy are televised relentlessly with occasional mentions to Syria, the overload of news that never seem less morose.

(Van sits on the kitchen table and opens her notes on her iphone and begins to type something….)

“Papa, you never stand a quiet minute in the same room as me

and bring bread for the guests!

Papa you never handle the furniture with care

Don’t no one hear your yells

Don’t no one hear the shouts

Don’t no one hear the poundings

Don’t no one else know about your other self

You don’t know how little you matter

To the family you shattered

When one terrible day it will matter to you

In all your shucking, stealing, and jiving

You scratch for that eternal itch in the

smoke that incinerates your family in your periphery

who , I,  on a live wire up of the street stand in an age old clique

The standing image of the girl with daddy issues and

her head heavy, like a pendulous to the ground”

(She stops typing, and closes her phone)

She finds her little niche at the end of her mom’s bed where she is busy folding clothes.

(she remembers not to ask)

Mama always found it hard to talk about her brother.

(she begins folding clothes with her)

INT. THROUGH VAN’S WINDOW PANE- THE NEXT MORNING

A familiar memory of her uncle is staged before her.

she sees mama sitting under the guava tree

in the beat up white plastic chair

and sees her tuning through the radio stations

until a familiar tune plays.

(a compilation of Rancheras play)

Her eyes well up seeing her mama under the guava tree.

feel fatal to my mind

but I begin to heal

under the guava tree, Tio”

(she sits next to mama)

The Heart of El Sereno
Scroll to top