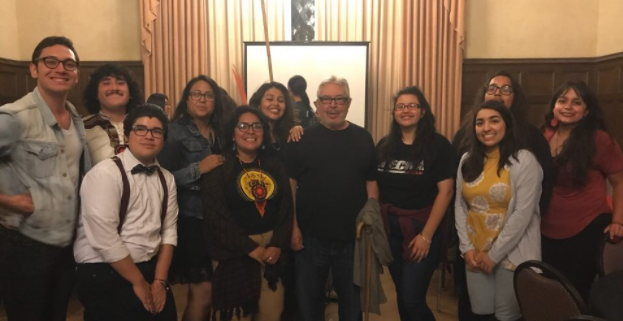 It’s the beginning of my Fall quarter in 2016 here at UCLA as a newly transfer student. I’m sitting in a class called “History of Chicano People.”

My first introduction to the legendary Juan Gómez-Quiñonez, also known as GQ, was through fellow Mechistas in MEChA de UCLA. As a newly admitted transfer student, the type of talk surrounding GQ had me picture him as a hardcore, intense historian who achieved legendary status through his influential work. My first-hand experience in his courses was just that: he is a Chicano legend.

As GQ entered the class he started to write on the board with chalk and began his lecture. When I received the syllabus I was thrown off immediately. “CSM159A: History of Chicano People” required of me a stack of 7 books, one course reader, and included a full 4-page, single spaced, bibliography of recommended literature. Never have I had to read so much for a class; never have I seen such an intense workload; but if you asked me if it was worth it, I would say yes. This was history, and it wasn’t going to be easy unpacking all the material GQ wanted us to engage.

Between watching documentaries, films, and videos on Chicana/o history, I was mostly awed at his tome of a book, Roots of Chicano Politics, 1600-1940. Not only that one, but also the eye-opening Indigenous Quotient/Stalking Words: American Indian Heritage As Future, a book on Indigenous education and knowledge. These, among the rest we were required to read and to analyze, were some of the most foundational works that have stayed with me my entire time here at UCLA. Making Aztlan: Ideology and Culture of the Chicana and Chicano Movement, 1966‑1977 was another edition to my own groundwork as a Chicana/o Studies major and scholar. It, like many of GQ’s books, solidified my passion for this field/discipline of study and where I wanted to contribute as an emerging Xicano undergraduate scholar. And with the focus on expanding this field of study to include Indigenous peoples of the Americas, my own research and work has shifted dramatically to think about the issues I learned from GQ.

GQ has been here at UCLA since 1969, teaching and writing on Chicana/o history and movements; this in itself is a monumental achievement. He was at the front lines of Chicano Studies efforts during the Chicana/o Movement(s) of the 1960s through the ‘70s: he was a key player in the incarnation of El Plan de Santa Barbara: A Chicano Plan for Higher Education. GQ was also a founding co-editor of the Aztlan: International Journal of Chicano Studies Research here at UCLA through the Chicano Studies Resource Center, which he also helped develop. With his consistent teaching of “History of Chicano People,” he has made lasting impacts on students throughout the years. All of this 40 years of work, dedication, and passion for Chicana/o education in academia will be a legacy for the history of Chicana/o efforts at UCLA and beyond. This year marks his 52nd year here at UCLA.

It is sad to say that GQ will be retiring as a professor at UCLA and will be obtaining the title of professor emeritus. I believe it is important to remember the legacy of this Chicano historian, arguably the only historian of Chicana/o people at UCLA, with his depth, rigor, and intensity.

I am happy and proud to say that I have sat-in and experienced the courses taught by GQ: writing 20-page final papers, hearing many community guest speakers, and being humbled by the knowledge of a legendary Chicano historian has taught me many things here at UCLA. What will always remain will be my foundation to Xicanismo.

From what I have learned as a Xicano student, I can continue to teach the revolutionary spirit of GQ. From his involvement of the Hunger Strikes for the departmentalization of Chicana and Chicano Studies to his active role in the community, i.e. his help in the creation and sustainability of Academia Semillas del Pueblo Xinaxcalmecac, an Mexican Indigenous public charter school of the Los Angeles Unified School District. What this teaches students is the role we must take for ourselves, for the liberation of our Raza, and for the self-determination which comes before it.

Because he is a caring and passionate professor who wants nothing more than to have us all graduate and attain the skills to help our communities,GQ will always be open to any student. We can only hope that his legacy is continuously remembered and that we always respect and honor his work in and for the community.

As a Mechista involved in MEChA de UCLA, I want to also acknowledge GQ’s time and commitment to Chicanx students at UCLA.

Juan Gómez-Quiñonez, thank you for your contribution to my knowledge and for those who you have influenced while at UCLA.

Note: GQ will be teaching his class CSM159A & B of the History of Chicano People Fall 2017 and Winter 2018 respectively.

The Heart of El Sereno