“Xicana/o encounters with diverse Native knowledge allowed Xicanas/os to arrive (or continue to be in process of arriving) to their own sacred bundles and places of knowledge. When Xicanas/os came to these traditions, memory was opened up for Indigenous people; memory can be the most powerful building block. The revival of Indigenous identity proliferated amongst the youth in the Chicano community and represented a spirit and a return to spiritual ways. A community that was once told that they did not belong was now claiming a place on this continent.”

This is a testimonio of my identity politics, to my critical consciousness, and to my own struggle(s)—which has been very difficult considering my privilege and what that means and looks like. Being a white-cis-passing, heterosexual, de-Indigenized Xicano male has been an interesting picture for my own identity and experiences. As a Raza student, McNair Scholar, La Gente writer, Mechista, and—what I would like to believe—an activist for agitating, destabilizing, and deconstructing european (westernized) knowledge, institutions, and ideology, my journey to this foundation and position speaks to my navigation in higher education.

As I first entered the colonial academic institution of University of California, Los Angeles (UCLA) as a transfer student, I was working under a completely different type of framework as a young self-identified Mexicano. As a punk kid in South Gate in the outskirts of South East Los Angeles who worked very hard at Los Angeles Southwest College (LASC) motivated by a desire to subvert the academy, I was a radical—but not entirely. I had books on Marxist thinkers; I delved into the fiery pits of anarchist theory and practice; I looked toward a poststructuralist way of philosophy, theory, and paradigm—which meant reading thinkers like Foucault, Deleuze, and Derrida. As you can see, I worked under a very european and westernized framework, which did not recognize nor nuance my positionality as a Mexicano in United States society.

I didn’t know nor understand the Raza struggle entirely at LASC, which was a predominately Black and Brown college. When I took the only course on Mexican-American history, I began my introduction and acknowledgement to my Raza’s historical (and contemporary) struggle for liberation and self-determination—I was opened up to new, but always mine, epistemologies and groundings.

But this was only a small taste; it was one I wouldn’t feel completely until UCLA. 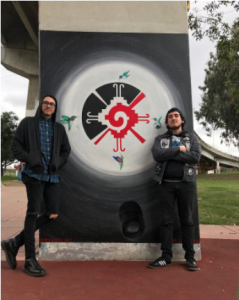 What caused a spark in my Spirit and made me excited at the time was the student organization Movimiento Estudiantil Chicanx de Aztlán (MEChA), which I learned about in the Mexican-American history class from watching the documentary Chicano! History of the Mexican American Civil Rights Movement. I slowly started to identify simply as a Chicano; at the time, I understood this identity to be an extension of being Mexicano. Upon transferring into UCLA, I knew I had to learn and understand who I was, but my journey toward a cohesive but complex identity would only be complicated further.

To put things into perspective: as I attended MEChA’s Transfer Raza Day (TRD) yield event, I was amazed at the community of Raza students on campus. Hosted by Monica Hurtado and Braulio Valaguez, these two individuals led a motivated committee of other Raza students and successfully put together a memorable day. Although I arrived late, receiving an award from Extended Opportunity Programs and Services (EOPS) the morning of, I still enjoyed the day and was blown away from the keynote speaker José González, a Tucson, Arizona educator who advocated for Ethnic Studies. He opened my eyes to many things concerning my culture, my people, and what education meant for our Gente. One of my takeaways was the idea of blossoming Browness, or asserting your Browness and your culture so much that people are forced to see it; my own identity was renegotiated after this day.

Because I was an Academic Advancement Program (AAP) student, I was able to attend their Transfer Summer Program (TSP) in 2016. As a part of the Chicana/o cohort, I was exposed to many new people with ancestral and community knowledges, and my classes challenged me to think and be critical on a level I was never exposed to. This came with radical reconceptions, re-articulations, and reconstructions of the knowledge base I drew from, adopting a more solid Chicanx epistemology and framework. I was more exposed to things I never experienced growing up, and to have this little family for what it was at the time was beautiful.

As I navigated UCLA, I found myself becoming more and more involved. I joined MEChA de UCLA and would later be voted into the position of Chicana/o Studies Co-Coordinator with my fellow Mechista and Compañera, Maritza Geronimo. I enjoyed the knowledge I would build with my Compañerxs at MEChA meetings and through the direct knowledges of my fellow Mechistas. 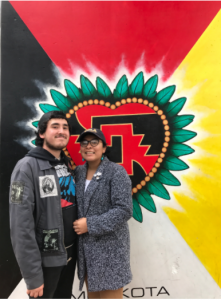 Through much exposure and deliberate discovery, I was able to begin a coherent idea of Chicanismo and what that meant today. With my Compañera Maritza, I was able to have critical discourse and conversation of these topics. We started our journey to defining what it meant to us: we looked at Chicana/o authors and close read their works, almost like studying Mexica codices. And I knew this political ideology wasn’t something rooted in Mexicanidad, but understanding pan-Indigeneity. It transcended and transgressed borders and nations; Chicanismo, or rather Xicanisma, would stress this importance.

Navigating through Campbell hall, studying in the Young Research Library, and finding comfort in the Student Activities Center at UCLA, I would face a very active student role. And the activist part of that role entailed me working toward self-determination and liberation of my Raza community. This also meant challenges I was perhaps not completely ready for. But I had the support of my fellow Mechistas and a student-initiated retention project by MEChA (Calmecac) to keep me moving forward.

Although only being at UCLA for a summer integration-program and completing a very rigorous and difficult Fall quarter, I had developed my own identity in a strong, but incomplete, sense. Here is a poem I wrote, which was a part of the zine project of my Intro Chicana/o Studies course, titled “La Muerte: Para Mis Antepasados de Anahuac/México”:

I AM THE PRODUCT OF COLONIALISM. As such, my voice speaks from passion, de la muerte: the living.

I walk on colonized lands—of precious, beautiful lands disrupted by the product of the white man’s capitalist mode of production. I breathe the air from machines that spit smoke, polluting the only tierra we call home. My lungs are made from modernity, from progress.

I don’t know the language of my ancestors, and I struggle to use and talk my colonizers lengua—so reluctant to speak what dominated, to speak what ordered genocide, to speak what erased what would be my culture.

I see Aztlán as a metaphor for redemption, of retribution, of wanting a spiritual home. Somewhere in what is considered México, my history, my family, my Raza, they were killed, tortured, callously conquered and told they were not human: they needed to be put straight. This is historical fact and it is painful.

I walk the streets of South Gate, my hometown, a once dominantly white community. I feel the presence of a memory, of a people not from my own blood, but people who ate from these lands, who worshiped these lands, and now we occupy—not by choice, but by legacies of colonialisms.

I was criticized once for claiming hecho en México, as if what is now California didn’t once belong to México—of course this being after the first wave of colonization by the Spanish conquistadores.

La Muerte: they survive in my blood, masked by the color of my white skin: a constant reminder that I’m in a colonized body, in a raped body, in a tortured, ambivalent body. My browness, my indigeneity, lives only through my veins, mi alma.

I once screamed in community college: Yo soy Chicano! The fucking political remains! Resistance lives in my blood! Revolution runs through my tongue! And those days were met with a silence from my own family, my friends.

Para la muerte: I see you, feel you, want to learn more from you.

And just like this piece, they live in fragments inside me, in history, in memory. But I will live for them: to remember and to resist—to fight in my life for their memory, for those still here, and those lost forever in the cosmos. 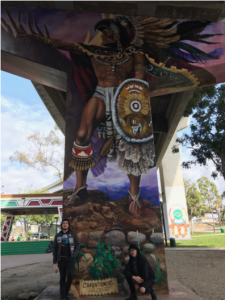 In the poem above, I express an understanding of myself as a Native individual who, through colonialism, was subject to an erasure of an Indigenous past. It wasn’t until I discovered a very important Indigenous scholar who opened my eyes to a new understanding of this way of knowing. Being introduced to Dr. Jennie Luna’s work, by the Chair of MEChA de UCLA, Natalia Toscano, I was able to read and reflect on what she terms Xicana Indígena. This identity and term recognizes the need and imperative toward reclaiming Indigenismo through political and critical consciousness, as it is said in Nahuatl, not spanish, challenging constructions of language. It is also defined as being a Native to these lands and being a diaspora people coming into the United States, and those who stayed during conquest, the events of 1848 (the Treaty of Guadalupe Hidalgo). It is a radical but necessary evolution of what Chicano was built on.

Xicana Indígena is also female-centered, highlighting female energies within our spirituality; it seeks to understand women and spirituality, looking for a return to dual-dualities outside of the european framework of binaries. As a collective identity, it is a radical reconfiguration of the initial identity of Chicano. This precious knowledge came to me as a radical restructuring of ideas and practices.

But the work of recognizing this term, its advocates, and its development is minimal. So we take on the spanish renditions of Xicano/a/@/x. I say I am Xicano, but being part of the Xicana Indígena people is something to be raised into our Raza collective consciousness. We must recognize our Indigeneity from wherever our Raza comes from in this hemisphere, including: El Salvador, Guatemala, Peru, and beyond.

The future is Indigenous, and when we acknowledge how close our communities really are, the process of consciousness will be pushed forward. The path toward Xicana Indígena is an opening to a new and expanded notion of what our veteranos y veteranas of the Chicano Movement set in motion. We are agents of change; to revolutionize our political identity is to recognize our processes of liberation. As a new generation it is our job to decolonize spaces which do not recognize us, and this starts with reading, having discourse, and searching through what UCLA scholar Maylei Blackwell termed “retrofitted memory,” in her book ¡Chicana Power! Contested Histories of Feminism in the Chicano Movement. Our revolution will be guided by our spiritual reclamation.

Identity as a complicated, complex, and nuanced experience can be opened up by introducing new concepts and experiences. As a series, I will locate those critical resources for mi Gente to start thinking about these important conversations.

Let my testimonio be the start: this is the Xinachtli series.

Author’s note: I chose not to capitalize “european” nor “spanish” because of power dynamics situated by westernized doctrines of language construction. In effect, I am contesting their power over capitalization, capitalizing instead words like: “Native,” “Indígena,” and “Raza.”

Who are Film’s Addicts, Maids, and Gardeners?
Scroll to top