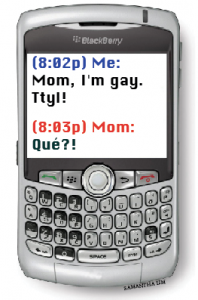 Coming out could be easier today than it was a decade ago! Think about it, all you’ve got to do is text your dad and tell him you’re a homo. Or, email your mom and let her know she doesn’t have to worry about you getting knocked up before you finish college! Ooooor just put that shit on Facebook and let people figure it out.

I think I’d rather get a beating or verbal lashing than forever live out my sexuality as an unspoken truth. It would seriously consume me and I’d end up growing tired of the burden and burst out, “I’m gay!” at some inappropriate time. Like maybe during my distant cousin’s neighbor’s daughter’s quinceañera. Uh-uh, no es bueno.

Anyway, I figure using technology to come out of the closet can be interpreted in one of two ways: it’s either a bitch move or it’s a sign of an individual who is tired of bullshit and boldly decides to put his or her true rainbow colors out there.

Some feel that putting it all on the table is reckless and insensitive towards family and close friends. But even sitting a person down and giving them “the talk” doesn’t make the process any easier.
I had to come out to my mom seven or eight times in different ways! There was a talk that turned into a lecture, then a letter, then, an email, a talk, a phone call, another talk, another lecture and yet another talk – all over the course of five years.

Bottom line, you have to figure out what works for you. If you’re a talker, talk it out. If you get emotional or have difficulty communicating face to face, maybe a well thought out e-mail would be a better approach. Maybe even after writing out the precursory e-mail, you’ll be able to just sit down and talk.

There’s no perfect way to handle the situation. If your family is ready to, they will accept you – regardless your tactic.

From Spanish to Spanglish: The language of the future?

A Mountain of a Dream
Scroll to top