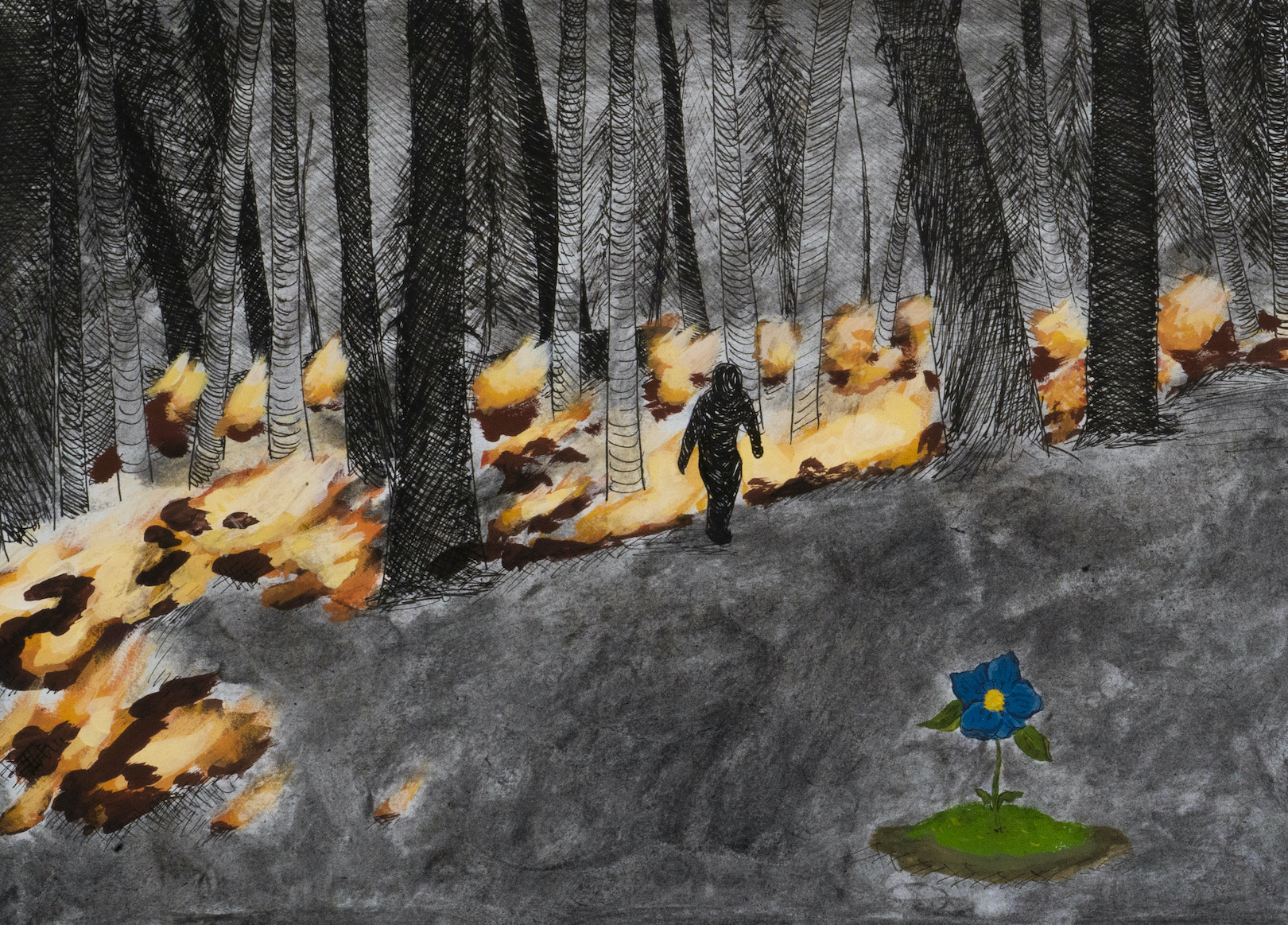 Burn it to the fucking ground

As I journey through the forest of introspection, I see it all through various perceptions

I looked up and slowly watched as the heavens grew dimmer

A rustling behind me, I sensed that it was one of many of the God forsaken sinners that haunt this space

As I turned around, a murder of crows looked into my soul and fused as one

As I realized who it was, I froze and immediately felt tears flow

Tears of sorrow, tears of rage, tears for when I allowed you to let my soul decay

I reached in my pocket and found an obsidian knife

I charged and cut deep, but this crow was not ready to lose its life

Slash after slash and cut after cut, the murder dispersed and as my rage created flames,

None of you bastards managed to escape

But still, my journey continued as I walked through the valley of trees

As the journey progressed, I stopped for a drink

However, the blood of this forest is now much like this dried up creek

As I painfully reached in for droplets to quench my thirst,

I sensed another evil presence, one who has a widespread curse

I call it out by its name, and it swooped down from the trees

Although I could not see its eyes, I could sense it looking right through me

And all I could ask myself was, do I look like this too?

As insecurity began to flood my mind, I dropped to the floor, and it dragged me to the edge of the creek

Before my eyes’ murky water began to fill this empty abyss

As I began to see my reflection, I once again felt your kiss

Disgusted by the sight I had seen I closed my eyes, yet your comments continued to persist

However, eventually having enough, I demanded you be dismissed

I stood up and turned around, and without thinking, I tackled you to the ground

As I overpowered you, you began to shrink

But before I could adjust my grip, you slipped away faster than I could blink

As you escaped into the trees

I knew what had to be done

Let the flames run rampant so that you have nowhere to hide, may the inferno cause you to depart from this life

As I walked away from the flames and moved deeper into the forest,

I began to move slower and slower to remained undetected

However, I knew eventually you would sense our strong connection

As I stared back up at the night sky hoping for guidance,

You pounced from the shadows and dug your claws deep

“Wasn’t that impressive?” You proudly asked as you began your narcissistic speech

As your voice grew louder and louder, my ears started to bleed

Prideful lion, always so eager to take the lead

Yet your speech rambled on filled with lies and deceit

We wrestled, and I managed to get you off of me

And when you readied yourself to pounce once more

I dodged, you missed, and when I saw the look on your face, I knew you were pissed

How could a mighty lion like you fail to attack its prey?

Pounce after pounce, I managed to evade every single attack

As you exhausted yourself, I could see your eyes fade to black

As you began to weaken, my knife turned into a spear

I launched it while you were dazed, and I purged you from my inner fears

As you struggled to take your last breath, you boasted about how you will never allow me to retake my place

And as your life began to fade, your body suddenly was set ablaze

Consumed in your pride, your anger at your failures caused you to die

As I neared the end of my journey, I looked back and felt the power of the conflagration

As I entered the cave that separates my reality from ours,

I was greeted by three noble beasts

You have risen from the ashes and found a new purpose

You have turned your insecurity into confidence

May your expressive and emotional soul revive this forests spiritual connection

You have turned your pride into valor

Protect our lands from ever once again turning sour

So let it burn

Burn it all down

Burn it all to the fucking ground

And once its over, let the rain wash away every bit of flame

Never again will darkness have this forest to claim

We’re All at a Distance
Scroll to top