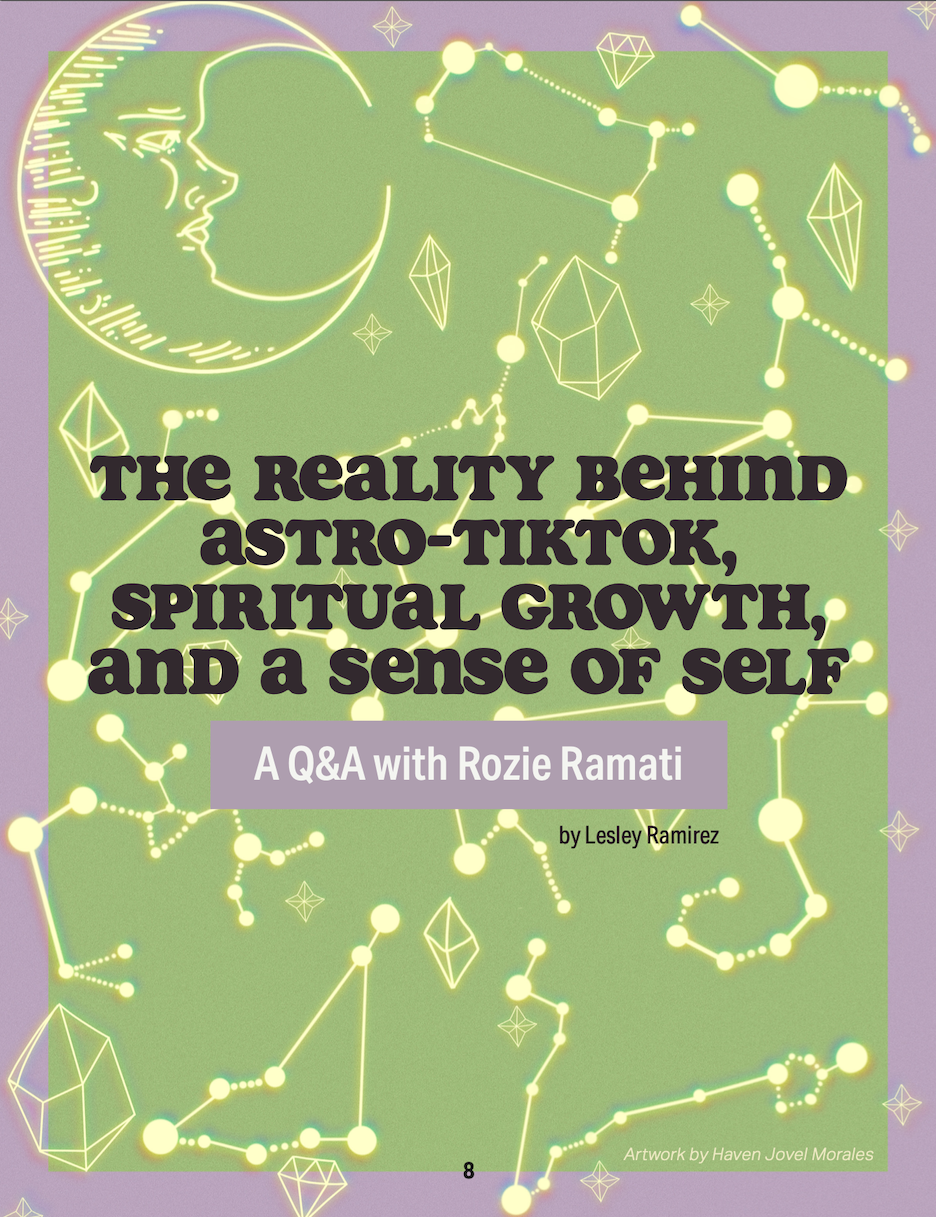 Rozie Ramati is a UCLA fourth year transfer American Literature & Culture major who recently blew up on the social media platform TikTok. With over 173k followers and 3.6 million likes, Rozie shares her knowledge of astrology and love of music on her profile. In her first video to receive over a million views, Rozie shared her feelings of astrologer “imposter syndrome” that have come as a result of her TikTok career. She explained that she was afraid to share what she knew about astrology after studying it for the past ten years because she was wary of people’s judgement. However, due to the large amount of misinformation she saw spread by other creators, Rozie felt urged to share what she knew about astrology and spirituality.

In an interview with Rozie, we delved into her background and what led her to become involved with astrology and spirituality. As a Santa Monica native, Rozie was born to a Mexican mother and Jewish father and grew up facing familial pressures to pursue higher education. In an effort to be recruited by colleges, Rozie joined the rowing team her junior year of high school and practiced synchronized swimming for 7 years, even competing on a national team. Unfortunately, this all came to a halt after experiencing multiple sports-related concussions. The abrupt stop to her athletic career pushed Rozie to branch out and explore other interests such as learning to play the ukulele and guitar, teaching herself how to sing, and yes— starting her journey into astrology and spirituality.

What is Spirituality? How did your journey begin?

Rozie shared that spirituality is something gradual, as opposed to a spontaneous enlightenment. She remarked that, as a whole,“we are inherently spiritual people” and that “we can uncover more parts of our spiritual self.” Ramati emphasized that we should be wary of seeing spirituality as “magic” and aggrandizing because spirituality “is just how things work.”

She shared her mantra of “everything definitely happens for a reason” and reiterated that in the end, “there’s a lesson to be learned in every situation.” Rozie credited her journey thus far and her “huge spiritual awakening” to the sports-related injuries that once seemed like major obstacles in her life.

How can we grow spiritually?

Rozie’s advice is to begin by “accepting that there are going to be really tough times,” and to know that, “you have to keep building yourself back up again and again no matter what.” Rozie confirmed that “there’s always going to be obstacles,” but it is best to face the obstacles for goals that will make you happy.

Hard work became a recurring theme in our talk about reaching life goals and Rozie shared that, “spirituality can help with that.” To reach personal life goals, shadow work – a spiritual aspect – must be something that you build upon.

Shadow work, Rozie laid out, “is confronting things that you don’t want to confront, like your ego or trauma.” It goes without saying that you will not see positive fruition with spirituality alone, “you have to put in work before you can really get anywhere” especially if “you want to get somewhere good.”

Rozie asked that we take a step back and begin with addressing our present selves. To work on your spiritual growth, she suggested that everyone should “be grateful for where you are now.” Rozie used her social media platform growth as an example. In the beginning, she was not actively pursuing a career nor did she have a large audience— “before I even started gaining a following on Tik Tok, I was practicing gratitude for the life I have right now… because I knew that if I’m grateful for my life now, I will definitely be grateful for my life later.” In full transparency, she shared “of course it’s hard to be grateful every step of the way… but any obstacle along the way will make [you] stronger.”

How much is within our control?

When asked this question, Rozie made sure to note that it is important to remember that “astrology does not necessarily define where you’ll end up, or who you’ll be, nor does spirituality. You define that yourself.” Astrology is an added tool to help you visualize your potential, “but it doesn’t set anything in stone.” However, astrological placements can still be beneficial. An example Rozie shared is that “some people may have favorable fame degrees, but they won’t be famous and that might be because they didn’t believe in themselves, or because they didn’t pursue fame or didn’t want fame.” No one’s destiny is permanently written in the stars and ultimately, “it really just depends on what the person wants out of their life and how their placements can serve them.”

An example of how much control we have is seen in the practice of manifestation. Rozie explained that for her, manifestation led to a boost in self confidence. Rozie claimed that “this past summer I was manifesting heavily in a journal, every single day for a month. If after that month I feel a little more confident in myself and my abilities, then I will only manifest around new moons.”

Rozie shared her guide on how to manifest and included reasons for why it is extremely promising:

“You manifest around new moons, because they are new beginnings. How I manifest is by saying things like ‘I am’ and ‘I have’ actively in [my] life. Also before you start manifesting… [you] always write down what [you] are grateful for. [Gratitude] is very important before you start asking the universe for anything. You don’t want to ask for anything really, you want to say ‘this is my reality,’ and then it becomes your reality. Another really important thing

Reflections in Yoga
Scroll to top