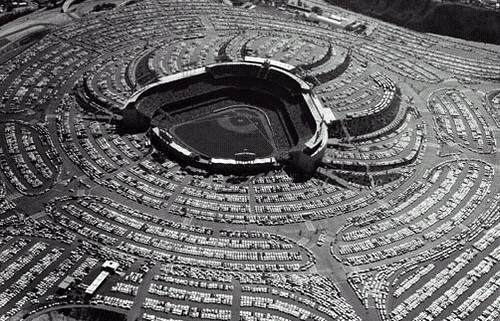 Dodger Stadium in Chavez Ravine (Photo by The City Project)

For many Latinos ¡Viva Los Doyers! is a common phrase heard growing up. The Dodgers, or Los Doyers, is a very prominent team in the Latino community. Many Latinos in Los Angeles “bleed blue” and support the Dodgers year round. Latinos’ faithfulness to the team is unquestionable, even from Latinos who still remember what lies beneath Dodger Stadium.

Los Angeles hasn’t always been the home to the Dodgers. In 1957 the Brooklyn Dodgers decided to come to the West Coast. Looking for a new stadium, Dodger owner Walter O’Malley saw an area in downtown as prime real estate. This village, home to many generations of Mexican Americans, was called Chavez Ravine.

Residents of Chavez Ravine, more than 1,000 families, were forcefully evicted from their homes. Many Latino families who were undocumented had no choice in the matter.

After displacing many Latino families, in June of 1958 the housing units were wiped out and Dodger Stadium construction began. Many Latino families would feel resentment towards the Dodger franchise for years to come.

But today it seems the injustices at Chavez Ravine are nothing but a distant memory, as Latino communities now embrace the Dodgers. Now, what could be the cause to this historical amnesia? The answer lies within #34.

The #34 was embroidered on the jersey of none other than Fernando Valenzuela, the pitcher for the Los Angeles Dodgers who led them to the World Championship in 1981. This Mexican Major League baseball pitcher from Sonora Mexico represented the Latino community and connected the team to the Latino population in Los Angeles. This was the beginning of the Latino and Dodger relationship.

This connection, tying Latinos to the Dodgers, has continued throughout the years with players such as shortstop Luis Cruz, right fielder Yasiel Puig, and first baseman Adrian Gonzalez.

Diana Chacon, a Chicana/o Studies major at UCLA, who affectionately calls the Left Field Pavilion at Dodger Stadium “La Raza Pavilion”, acknowledges the injustices for many Latinos during the 50s. However, she says they’re in the back of her mind when she’s at games. What the Dodgers have given to the Latino community since then have more than made up for it in her opinion.

A Dodger fan since birth, Chacon says Dodgers represent more than a sport. “The Dodgers remind me of my grandfather who used to take me to games.”

Chacon recalls her late grandfather, who became a fan during the Valenzuela era, feeling proud to see a ballplayer from Mexico playing for the Dodgers, especially during a time where few Latinos were in sports.

The Dodgers and Latino culture in Los Angeles have been bound together for decades. Despite the tumultuous beginning to the Dodgers’ arrival, Dodger Stadium represents something bigger to the Latino community. It’s a place where their culture and city can come together.

“The Dodgers allow me to feel connected to my city and my culture,” Chacon said. “Los Angeles is our city, Los Doyers is our team.”