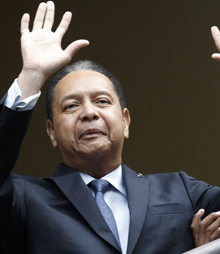 Exiled Haitian dictator returns to Haiti amidst skepticism as to his intentions while the country experiences deep social, economic and political crisis.  Jean-Claude “Baby Doc” Duvalier has been exiled for 25 years.

The former dictator, who became president of Haiti after his father Francois “Papa Doc” Duvalier died in 1971, fled after 15 years of violent clashes with anti-government groups.

According to a chronology of Duvalier’s dictatorship provided in the Los Angeles Times, “Baby Doc” fled with US$6.2 million in public funds.  Duvalier provided little explanation for his return other than he had “come to help.”

Legislation proposes separate birth certificates for children of citizens and...