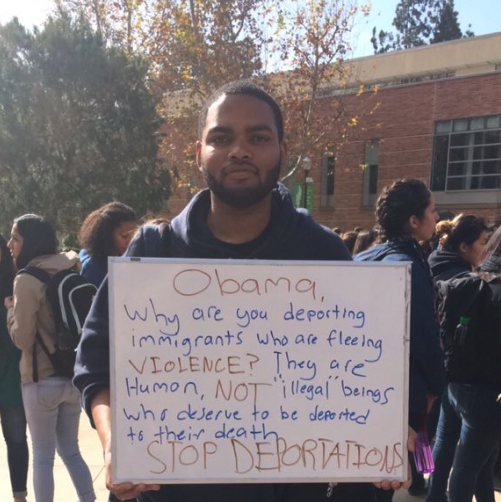 This news piece is a collaboration between La Gente staff writers, Jocelyn Martinez and Hector Guevara.

Sounds of a unity clap echoed through Bruin Plaza on Wednesday, January 20th, as the Rally Against Mass Deportation came to a close.

Organized by the newly founded United Coalition Against Mass Deportation, UCLA students and faculty demonstrated against “U.S. Immigration and Custom Enforcement’s (ICE) decision to increase raids of families who have fled the severe violence and humanitarian crisis in Central America.”

The coalition, composed of numerous student groups on campus — among them MEChA, IDEAS, USEU, Night of Cultura, and the Afrikan Student Union — demands that UCLA, along with other government establishments, proactively stand against ICE raids, declare itself a sanctuary against any raids and deportations, advocate on behalf of detained students/faculty/staff, and back the undocumented community’s fundraising efforts.

The frequent mention of ICE within personal migration stories shared by the rally’s attendees reiterated the need for UCLA administration to implement the coalition’s demands.

As one student’s sign read, it is important for UCLA — as a public, government institution — to “secure humanity, not borders.”

The mass migration of women and unaccompanied minors from Central America’s northern triangle (Guatemala, Honduras, and El Salvador) is a result of the region’s heightened gang violence. The weakened Central American economy, limited job prospects, and rural poverty coincide with the increased violence in the region — making these three countries the most dangerous in the Western Hemisphere.

The influx of unaccompanied minors to the United States, is a Humanitarian Crisis. Research conducted by the United Nations High Commissioner for Refugees (UNHCR) found that the minors in the detention facilities show clear indications of need from international protection. Many of those in the research study cited violence, deprivation and home abuse as the main factors for their migration. The UNHCR has advocated that these unaccompanied minors and separated children should not return to the situations of harm or danger in their home country. The U.S. should not turn a blind-eye to the humanitarian crisis and cease to separate, deport, and destroy transnational families.

UCLA’s United Coalition Against Mass Deportation seeks to address these non-humanitarian actions and advocates for the immediate halt of large-scale deportation by urging the UCLA administration to influence and inform the national community about the current humanitarian crisis of Central American migrants.

Ahjussi, I Too Am an American