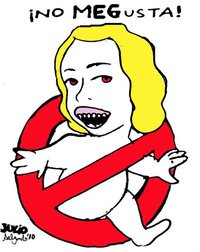 Failed Gubernatorial candidate Meg Whitman learned the hard way that money can’t buy you love. Spending a record breaking $160 million, the former eBay CEO will have to go back to being an average billionaire.

After months of invading Pandora Internet Radio and YouTube with pop-up ads touting her commitment to California, Whitman will hopefully disappear into obscurity, joining the numerous failed political hopefuls that were unable to purchase an election.

The greatest contradiction was Whitman’s massive Spanish language media campaign that attempted to sway Latinos, despite opposing bilingual education. Whitman’s website craftily kept her views hidden from the Latino community, having links for ‘Latinos for Meg’ and ‘MEGaMujeres,’ which provided a toolkit for organizing and recruiting volunteers while simultaniously proclaiming her opposition to Arizona’s SB1070.

Whitman went a step further by denouncing Proposition 187, an anti-immigrant bill passed in the early 90s of which her campaign chairman Pete “Pito” Wilson was an avid proponent. While having a former California governor on her team was a positive, had Whitman participated in the political process previously, she would have known that Latinos despise Wilson with a passion.

While the political rhetoric of creating jobs, fixing education, and cutting spending continued to spew from her protruding gums, connecting with voters on a basic human level proved to be a challenge. The cold charred piece of flesh that now sits where her heart used to be became clearly visible to voters when Whitman’s former housekeeper stepped out of the shadows.

Serving as contradictory evidence of a vital portion of Whitman’s anti-immigrant political platform, Nicky Diaz Santillan worked for over nine years without documentation at the Whitman home. Obviously fearing the looming backlash spawned by her hypocrisy, Whitman called foul and stated that her former housekeeper should be deported. It seems even California sunshine is not enough to warm the frosty yellowish plasma-like substance that courses through her veins.

After spending a record $141.6 million of her own hard-earned cash on her campaign, Whitman was outdone by a former disgruntled housekeeper.

Whitman said it best in a letter of defeat posted on her website: “Politics too often lacks humanity.”  If by politics Whitman means “former eBay CEOs who run for political office,” then we and millions of California voters are in agreement.