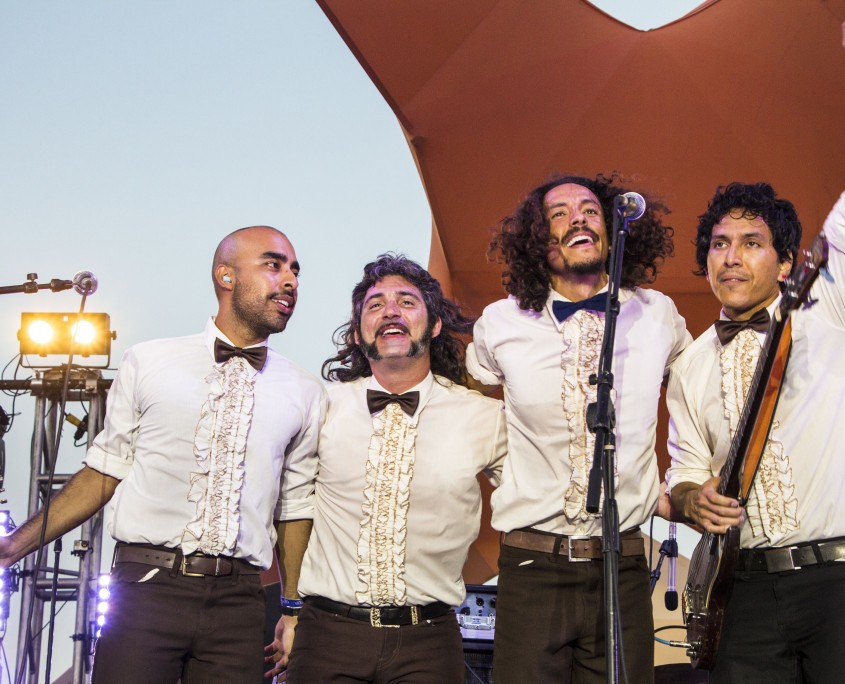 Every year, the Santa Monica Pier hosts their Twilight Concert series showcasing an array of musical artists from all types of genres. For this 31st year anniversary, the Twilight Concerts’ lineup includes musical artists such as Real Estate, Sister Nancy, and Ariel Pink. Chicano Batman performed and opened the stage on July 23rd with their retro ruffled suits and psychedelic funk before the headliners, Cubanismo.

The quartet, featuring Carlos Arevalo (guitar), Bardo Martinez (lead vocals, keyboard, guitar), Eduardo Arenas (bass, vocals), and Gabriel Villa (drums, percussion), put on an amazing show encompassing a broad collection of Latin sounds from past generations rejuvenated to fit the present. With their surf-rock Cumbia, romantica-style melodies, and Colombian rhythms, Chicano Batman pays homage to influential legendary Latin groups such as Los Lobos, Los Mirlos, and Los Angeles Negros. Their bilingual transitions during sets speak to the legacy of the Spanish language musical heritage of the United States which continues to diversify the dance floor and concert spaces with a bit of multiculturalism. Bossa Nova is also a major musical influence on the band’s fusion of Portuguese, samba, and jazz. But more than a tribute band, Chicano Batman is on “a mission to bring the overlooked to the forefront” as they state on their website.

In fact, Chicano Batman’s logo pieces together the United Farm Workers’ eagle designed by Caesar Chavez in the 1960s and the batman symbol. Together these symbols represent the band’s allegiance to the Latin community both through pop-culture and political cultural identity. Through their lyricism and rhythm, Chicano Batman expresses the daily experiences of modern day Latin Americans, presenting themselves as an example. Their music stems from their own living experiences and memories within the Los Angeles community. Thus, each track generates a sense of nostalgia, which is a common response to most postmodern art forms. Not only do they borrow from past traditions in both their music and style, but they seek to immortalize the experience of growing up to the sounds of their parents’ music. It is for this reason the band combines these styles for their live audience throughout local Los Angeles. A passerby might say they sound different and for others, psychedelic Chicano rock. Whichever genre they fit, Chicano Batman will not be mitigated to menial parts of the record store. They are a group of passionate Latinos from East Los Angeles who appreciate and validate a multicultural community through language and art.

Chicano Batman’s latest album is titled Cycles of Existential Rhyme and you can catch them at El Rey Theatre in Los Angeles on August 28th.

Hole in the Wall: The Honey Tones
0 replies