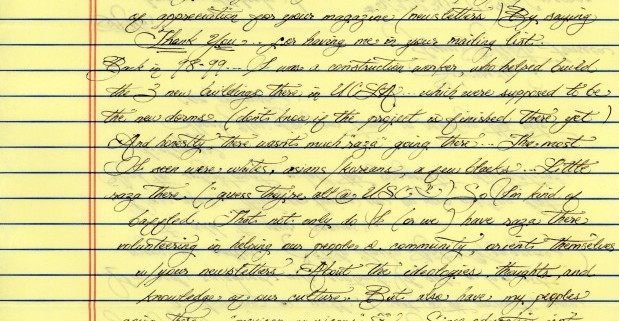 I am inspired by the solidarity, the passion and the Brown pride I found in the prisoner letters written to La Gente.

The prisoners go out of their way to educate themselves and to ask questions. I am inspired that people outside of the higher education path are conscious of the anglo-oriented education system that disorient and rob us of our history.

I respect the prisoners for seeking consciousness without many resources offered to them.

La Gente Newsmagazine has been distributing its quarterly newsmagazine to incarcerated individuals since our first issue in 1971. The influx of letters and support from prisoners was a catalyst for the creation of a section for their contributions called Sigan Luchando, which first appeared in the April/May 1993 issue.

Each letter has its own personality. Some are in cursive, some in calligraphy, and some as if typed on a computer.

They incorporate Spanish and Spanglish.  They are formal, and polite. It is as if I was in their cell patiently listening to them.

Their eagerness to be informed and their contribution of poems and artwork added to my excitement of being a part of this newsmagazine.

I know my voice, like the voice of the prisoners’, will be heard.