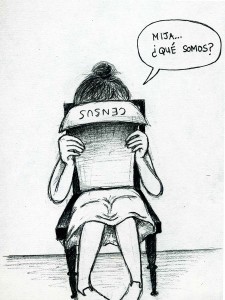 I was home for the weekend, eating dinner in the kitchen and talking to my mom about my week at school. It was last month, when the government made every effort to urge people to fill out the 2010 Census. So after seeing one of those TV census commercials, my mom told me she filled out every question of the famous survey. I felt very proud of her since I thought she would have difficulty understanding the questions—not that she can’t read or anything, but you know how complicated things can get with politics and the government. While thinking what a good job my mom had done, she then said, “but I still need to answer one more question.”  With a question mark in her face, my mom asked, “¿mija, que somos?”

I found it interesting, or better yet, annoying and irritating, to see that race and Hispanic origin are separated into different categories.  Not only do we have to decide if we are of Hispanic, Latino, or Spanish origin, but we are asked again to classify our race.

Allow me to problematize these questions. First of all, Latino, although it sounds nice and even exotic, is a term used exclusively for people who come from Spanish speaking countries south of the border. But doesn’t Europe have Latinos too? After all, Italians, French, Romanians, etc. are also of Latin origin.  Secondly, one can come from a Spanish speaking country but not be of Hispanic/Latin heritage. Most countries have Indigenous communities that are secluded or excluded from the greater city life and have to learn Spanish as a second language.

The census also left me in awe whe I saw Chinese, Filipino, Japanese, Korean, Vietnamese, listed as races next to white and black. So I ask: do they want to know our country of origin or our skin color?  Maybe the answer is both. Thus I find that the last option for question nine, “some other race”, is the most pertinent option. In my opinion, there should only be one racial/ethnic question next time, that way people can have the liberty to write in answers that they consider most appropriate to define themselves and are not limited to imposed options.

Time magazine reports that in the 2000 Census, more than 40% of Hispanics did not register as white or black but rather as “other.” Angelo Falcón, the National Institute for Latino Policy in New York City president and census community adviser told Time that “a lot of Hispanics find the black-white option offensive, and they’re asserting their own racial uniqueness.”  As for me, I consider myself, and most of my paisanos mestizos.

So after analyzing all these discrepancies and incongruities (which are not only applicable to Hispanics/Latinos), I laugh at myself for telling my mom we are white; I should have said what I really believe we are, mestizos.

Aztec Exhibition at the Getty Villa