On Sunday, hundreds of demonstrators marched through the streets of Downtown Los Angeles to protest against the shooting and death of Ezell Ford, a 25 year old African American. According to witnesses, Ford did not resist arrest and was shot without any justified reason by unidentified LAPD officers. In the other hand, LAPD stated that Ford was resisting arrest and attempted to grab one of the officer’s gun which prompted them to shoot him.

The protest started in front of the headquarters of LAPD at around 3:30 P.M. and marched through Union Station, Little Tokyo, and Plazita Olvera. Protesters shouted chants such as “Cannot ignore us anymore, we’ll be back even stronger” and “Don’t shoot, hands up” while they held their hands up and kneeled on the ground. Among their main demands was the filing of charges against the two police officers involved in the shooting of Ford and community control over the police force under a civilian elected board. The protest was hosted by Ford’s family in collaboration with organizations such as Los Angeles People’s Media, Coalition for Community Control Over the Police, and the Black Youth Project. 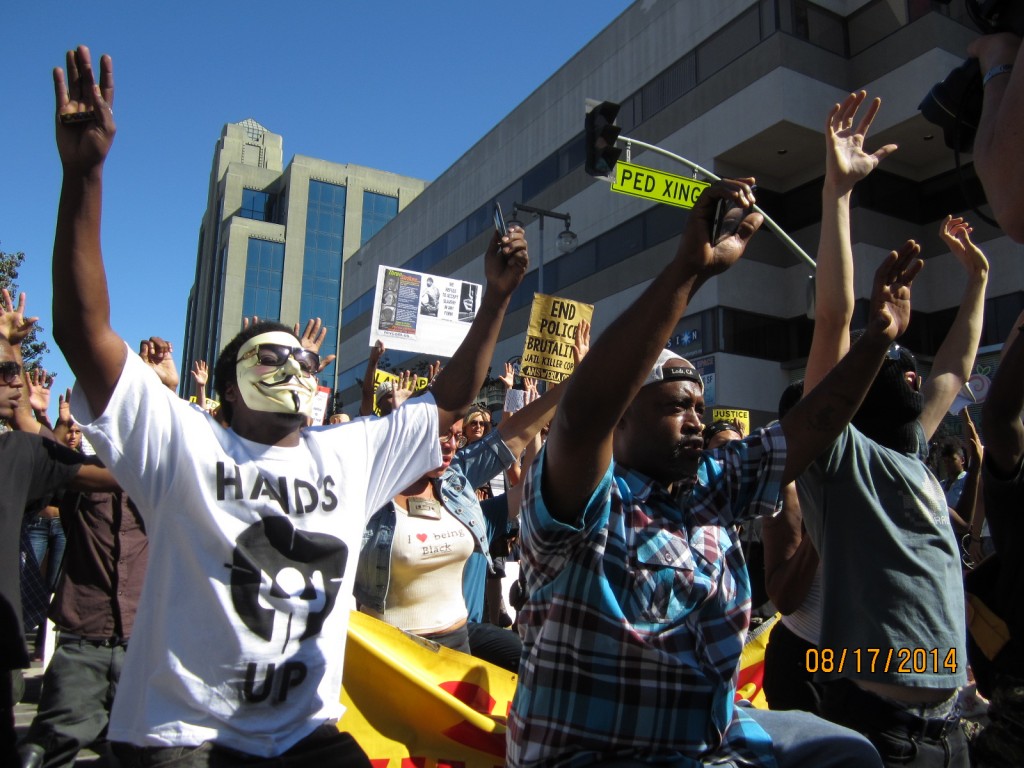 The protest was also inspired by a national outrage against police violence towards people of color. One of these cases includes the shooting of African American and 18 years-old Michael Brown in Ferguson, Missouri by police officer Darren Wilson. The shooting of Brown sparked a wave of protests in Ferguson. In response to these protests the governor of Missouri declared a curfew which Amnesty International declared unnecessary.

The protest was also accompanied by the family of Omar Obrego, who died after being beat up by LAPD officers nine days before the shooting of ford. Obrego’s widow and son spoke at the rally against LAPD’s actions. “We want justice for Omar Obrego” Obrego’s widow said, “The cops are killers…they’re not suppose to be killing people, their suppose to protect our community.” Latter she added as she held the shirt of her daughter that had an imprinted picture of Obrego, “He was coming from work..They kill him instead of giving him a ticket.”

At around 5:30 P.M. the main organizers of the march called off the protest to prevent a violent confrontation between the demonstrators and the police. But many demonstrators still felt the need to continue the protest and blocked streets surrounding LAPD headquarters. After the number of protestors decreased to around a hundred, a march ensued again through the streets of Downtown and ended in LAPD headquarters at around 9 P.M. 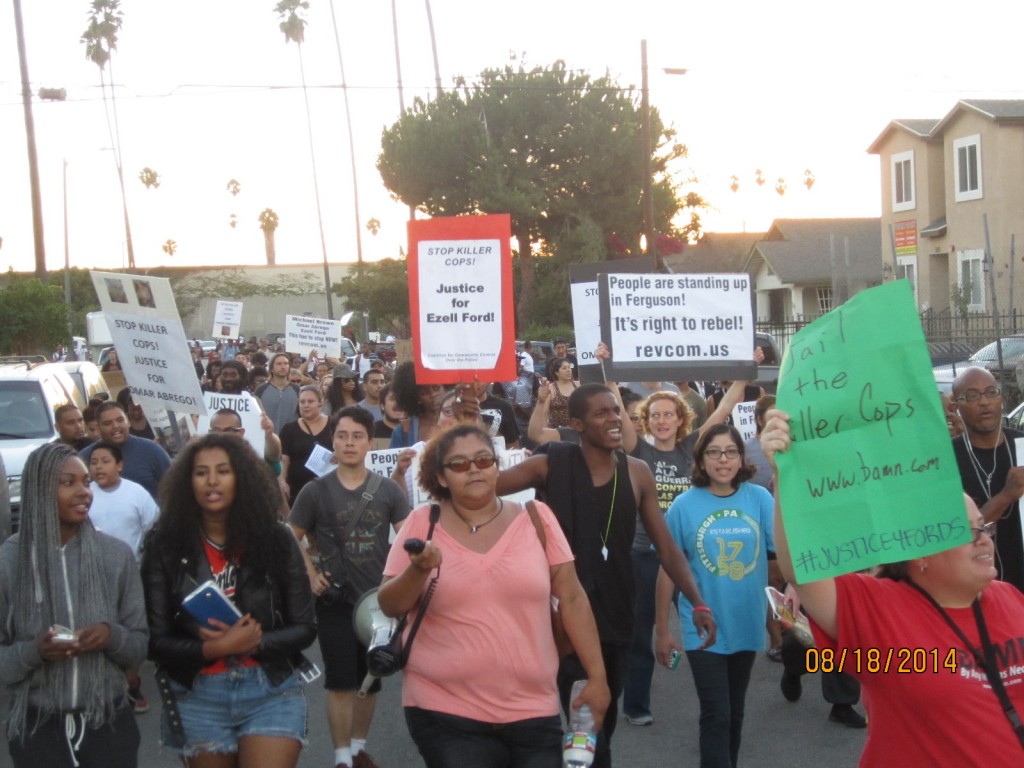 The next day, at around 5 P.M., By Any Means Necessary (BAMN), an organization concerned with civil rights for people of color and immigrants, hosted another march in South Central Los Angeles. Latinos and blacks marched together through the streets while community members peeked through their doors and front yards. Some of them lifted their fist in support of the march while others simply took picture with their cell phones. South Central community member and demonstrator.

David Brain, a South East Los Angele resident, was frustrated at the apathy of members of his own community.

“Why does this happen? Because we have become so passive… We do nothing. This kind of insanity has to stop…Unless we do something on the radical bases” said Brain.

Police officers riding bicycles followed the protest from a distance and some protesters pointed out that there were undercover police officers watching near the march.

The marched stopped in front of the house of Omar Obrego and the memorial place of Ezell Ford where family members of the deceased and community members spoke against police brutality towards people of color. Community organizers and activist plan to continue their actions until the police involved in the shooting of Ford are charged and punished.