Iranian group known as the Revolutionary Guards Corps – Qods Force (IRGC-QF) has ties in many parts of the world including North Africa, Iraq, Afghanistan and Latin America. A new report by Congress regarding Tehran’s military indicates there is an increase in paramilitary Qods in Venezuela. The report shows no evidence of action by either Venezuela or Iran, yet there is indication of Qod network operations increasing in Venezuela.

This relationship has sparked mixed responses from professionals. US and Middle East specialist Kenneth Katzman warns for a close examination of this seemingly anti-US relationship the two countires share. On the other hand, Defense Secretary Robert M. Gates describes this issue as a minimal concern, claiming that Venezuela does not pose a threat at this time. 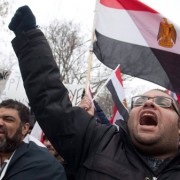 The Path to Citizenship: If the DREAM Act passes, undocumented hopefuls must decide between enrollment or enlistment
0 replies