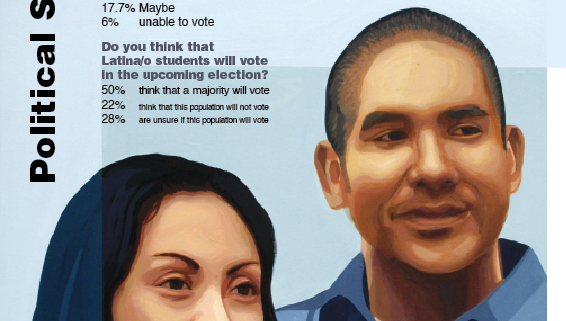 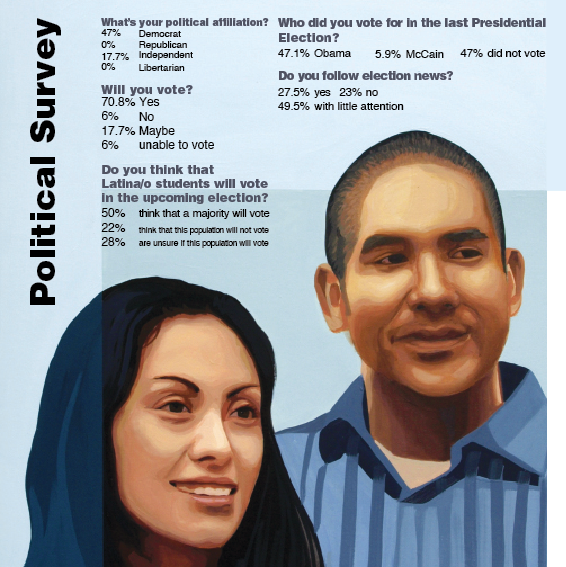 “Opportunity” The image portrays a couple looking through a glass pane. The areas behind the glass are simplified and very subtractive. An open section in the glass shows their faces clearly and actually places part of the glass barrier behind them signifying the forward approach to the opportunities available to them. Previously published in La Gente’s Fall 2011 Opportunity Issue. Painted by Jose Loza. Numbers from the political survey by Maria Teresa Armendariz Guerra.

That was a conversation my roommate and I had one night while watching television. The extent of our conversation was short, yet it was enough to get me wondering: what did Karla mean when she said that elections were a “waste” of her time? Weren’t the aim of election ads to motivate viewers to vote in the upcoming elections rather than make a person change the channel in disgust?

When first starting this article, I wanted to gather a detailed consensus on the Latina/o student vote, who was going to vote for which candidate and why? But instead of answers in favor of the Democratic or Republican candidate, I received a lot of shrugs and head shakes accompanied with “I don’t know” and “I don’t plan on voting.”

upcoming 2012 presidential election. As a Chicana/o Studies major, I am constantly in conversation with students who have well-established opinions on political and social issues such as immigration reform and international relations with Mexico.

But the prospect of voting in November? Forget it. A lot of students, even beyond the Chicana/o Studies department, are showing severe signs of apathy when it comes to engaging in the upcoming election and choosing to vote.

Miguel Murillo, a third-year transfer Chicana/o Studies and Women’s Studies double-major, is unable to vote due to his legal permanent resident status. Despite this, he makes an effort to stay informed on mainstream politics and the upcoming election, though he’s observed that fellow Bruins seem less interested. “I think majority of professors try to stress the importance of politics, voting, and the upcoming election but I’ve heard a lot of students use the excuse that they are too busy with school to stay informed,” stated Miguel. “Also, not seeing real, tangible change in society has discouraged students.”

That is not to say that every student holds no interest in politics. I attended the Janet Napolitano protest at UCLA earlier in the quarter. The group of supporters consisted of members from various organizations based on campus and in the greater LA community. Majority of students were not open to discuss the election at the event, which is understandable, considering we were there for a specific reason. Yet, if a political rally is not the place to discuss the upcoming election, then where can I find other UCLA students willing to talk about it?

“UCLA is a reflection of what we can see happening in Latino communities across the nation.  People have jobs, financial worries, familial responsibilities, community activities, and just generally struggle to survive. So it may be hard to stay on top of political news,” said Pepe Aguilar-Hernandez, a Chicana/o Studies TA and PhD graduate student. “The biggest group of students I saw politicize the campus during the 2008 presidential election was UCLA IDEAS (Improving Dreams, Equality, Access, and Success). Even though undocumented students are unable to vote, they tend to stress the importance of voting to those that can. Hopefully there can be the same movement of Latino student voters centered on voting as an act of solidarity to their communities.”

If daily obligations and a sense of disappointment about Obama’s first term are discouraging Latino students to vote en masse, how can they make their opinions effective in mainstream politics?  “The important thing to realize is that there are other means of political mobilization. Students may choose to work in non-profit organizations, produce political commentary via the arts, film, and education trajectories,” stated Aguilar-Hernandez. “There are different ways to create political change within the community instead of voting and students are creatively seeking them out.”

There are several factors to consider to why there is an atmosphere of apathy amongst Latino student voters.  Students might be intentionally isolating themselves from mainstream politics because they feel discouraged.  Or students might have a hectic school, work, and life schedule that does not allow time to catch up with election news.  Whatever the reason, the Latina/o student on campus needs to make an effort to exercise the citizen right to vote because the reason of “I don’t have time for politics” is not good enough.