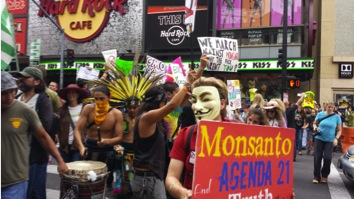 On May 24th Los Angeles residents marched against Monsanto, a multinational agricultural and chemical company. Among their main grievances towards the company was the use of genetically modified organisms (GMOs) as food products and the continual resistance from Monsanto to allow GMO products to be labeled as such.

Protestors started to gather at 10 A.M. at Elderberries Cafe on Sunset Boulevard and Sierra Bonita Avenue. The crowded vegan cafe was packed with people moving around to prepare for the march. Some created signs against Monsanto, others distributed non-GMO seedlings among protestors, and a few sat down to sip their last coffee before heading out to the march. 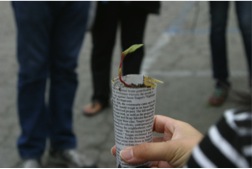 This family-friendly and peaceful march was composed by family members, children, occupiers (from the Occupy Wall Street movement) , indigenous organizations, other community members, and even dogs. 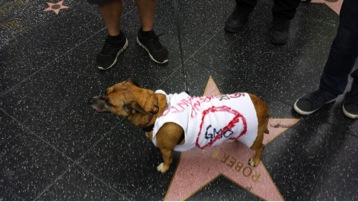 At 10: 30 A.M. people started to march on the sidewalks towards Plummer Park, where people gathered around to express their grievances towards Monsanto. A group of Aztec dancers arrived at the rally to perform a dance to the beat of the drums while protestors chanted “No GMOs!”

An elder of the indigenous dance group directed the dance and spoke of the importance of working together for future generations. “All the energies and elements allow us to be here together . . . we need to continue working together because it’s for our children, all the children of all color, of all languages, of all beliefs. For the children! . . . For mother Earth!” 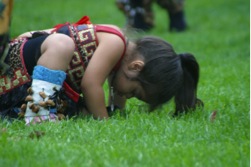 A high school junior coming to his first march carried a green flag, which he described as a pro-environmental and equality flag. “I [do] not like how corporations are poisoning our food and monopolizing and buying our politicians,” he said, explaining the reason he decided to come to the march. 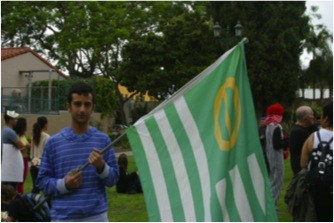 An activist couple fresh from North Carolina, Victoria and Victor, also joined the march. “I didn’t know what GMO’s were for the longest time and then when I found out what they were I eliminated them from my diet. It greatly improved my health . . . I was taking a lot of medications and I was very [sick]. I realized how horrible it affected everybody. I came out because this is the way to speak against [Monsanto],” said Victoria. 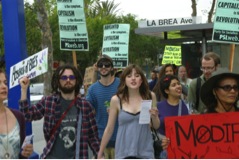 Clinton Clad-Johnson, a History and Political Science UCLA student, came out to the march to demonstrate solidarity with the Los Angeles community and to denounce the “criminality” of Monsanto. “UCLA students need to attend more protests in the L.A. area,” said Clinton. 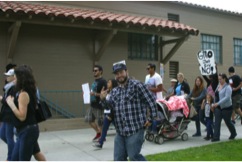 The march continue through Sunset Boulevard, stopping at Hollywood High School were elementary age kids spoke against Monsanto. Continuing through Highland Avenue the march arrived at the crowded heart of Hollywood where police officers and pedestrians directed their attention to the march that consisted of 200-250 participants.

The march culminated in the plating of non-GMO seedlings in the Hollywood Gateway Sculpture, where Wolverine assisted the protesters in their efforts. 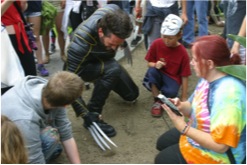 This protest was one of many planned in various cities across the world to protest Monsanto and the use of GMOs as food products. Activists claim GMOs cause organ damage, sterility, birth defects, auto-immune conditions, infant mortality and many more diseases. They claim that Monsanto uses harmful practices towards the environment through habitat destruction, mono-cropping, soil infertility,  and by decreasing the world’s bee population. Many activists are skeptical that regulatory agencies, such as the U.S. Department of Agriculture, are going to assess the health and environmental damages caused by Monsanto due to a constant revolving door of Monsanto employees into these regulatory agencies. That is why activists have opted to take their concerns to the streets and to their congressional representatives.