It is not rare to find Aztec dancers, the LAPD, ICE, and a swarm of news microphones on the same block in Los Angeles. But on July 7, the streets of Downtown Los Angeles rattle under mid-summer heat as supporters of the Central American children seeking refuge in the U.S. take over the streets for a town hall and demonstration. As delegates like Hillary Clinton, Vice-president Joe Biden, and President Obama urge the Honduran, Guatemalan, and El Salvadoran governments to stop encouraging children to immigrate into the United States, approximately 75 demonstrators showed their support for the immigrants. 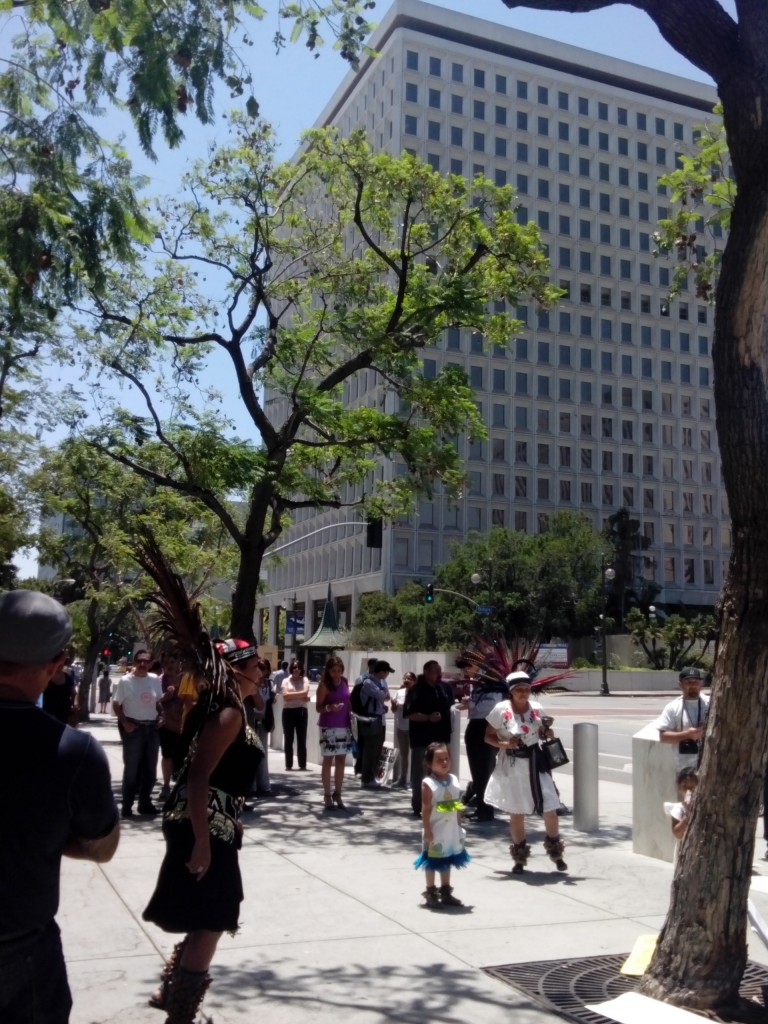 The afternoon town hall brought together community members and organizations including the Center for Human Rights and Constitutional Law, Homies Unidos, USEU, IDEPSCA, the Bus Riders Union, and a myriad of others. The gathering included a number of speakers breaking down the issue and myths as to why the children are coming to the United States. Demonstrators gathered in front of the Federal Building on 300 N. Los Angeles Street. 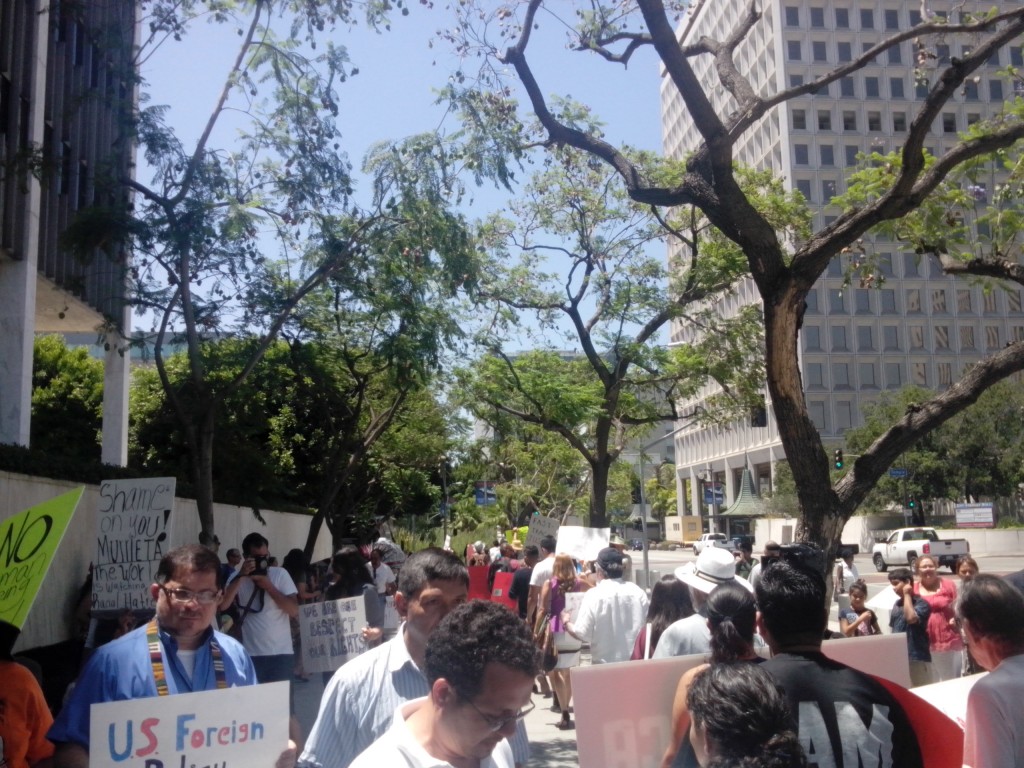 Members of the aforementioned organizations spoke to tell Obama to “respect the 2008 Anti-trafficking law, which protects and provides refugee status to minors from Central America”, according to the flyer. A subsequent rally followed the speakers.

Regarding the issue, President Obama said in front of the White House on July 1st, “I sent a letter to congressional leaders asking that they work with me to address the urgent humanitarian challenge on the border, and support the immigration and Border Patrol agents who already apprehend and deport hundreds of thousands of undocumented immigrants every year”.The Federal Government’s response to the issue has been to treat the children just like they treat all other incoming immigrants: sent to detention centers and await deportation.

The issue has been framed in terms of economic opportunity for the children instead of seeing them as refugees.

Though this attitude has saturated mainstream presses, UCLA Chicana and Chicano Studies Professor Leisy Abrego, one of the speakers, comments with a different perspective: “(The mainstream medias) are trying to connect it to undocumented migration in general, but this is different because they are refugees who are fleeing a situation that is a result of wars, the war and drugs and neo-liberal policy that the U.S. supports in the region. These are the consequences of these failed policies but in the media we are talking about them as just undocumented immigrants who are seeking economic opportunities.”

Days prior to this town hall in Los Angeles, citizens in Murrieta, California, waving U.S. flags and “STOP Illegal Immigration” signs, turned around a bus full of incoming migrant children. They were instead sent to a detention center in San Diego where 30-40 bodies can get packed a single cell, forcing many to sleep sitting up.

“We have to send a clear message: just because your child gets across the border doesn’t mean your child gets to stay,” Hillary Clinton said in a CNN-hosted town hall weeks prior regarding the children.

A counter demonstration responded to the anti-immigration rally and demonstrators on Sunday, July 6, welcoming the children and condemning Murrita’s xenophobic attitude. The tension was met by police in riot gear in case they needed to quell down any conflicts. By the end of the day, 5 pro-Central American immigrant demonstrators were assaulted and arrested by police.

The sun beats on the backs of the supporter as they chant and scream “Obama! Escucha! Estamos en la lucha!” into open windows of buzzing automobiles. Some passing cars honk in solidarity. Children walked up and down the street holding a banner reading “Welcome Refugee Children/ Bienvenidos Ninos Refugiados” as a local paletero cooled the demonstrators with frozen paletas and nieves. Though the heat, LAPD, and ICE’s ardent presence made sending a message a tad uncomfortable, this did not stop the citizens from sending home their message.

Abrego also included and concluded, “Sadly the Obama Administration is reacting as if it were just any other migration, and rather than thinking about the most humane way of handling children who have risked their life to get here, they’re asking for changes in the few policies that protect these children to instead fast-track their deportations.”

The children, as of now, are still stuffed inside the detention centers.  Both pro-refugee supporters and anti-immigration protesters wait for more information in order to make their next move. 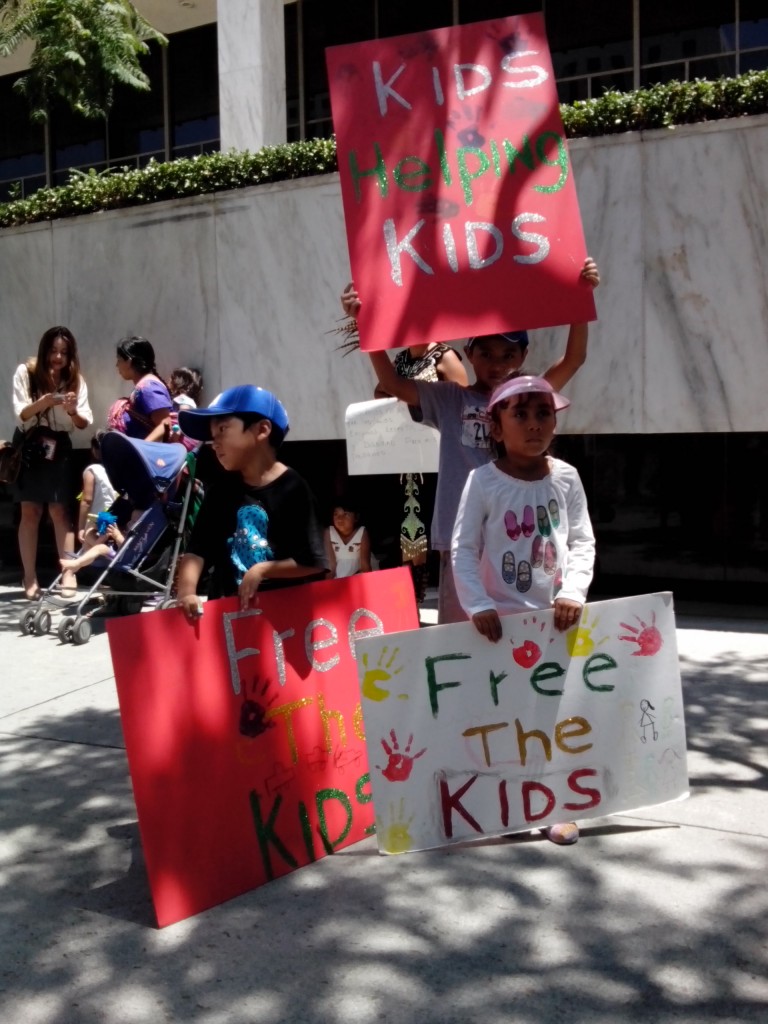 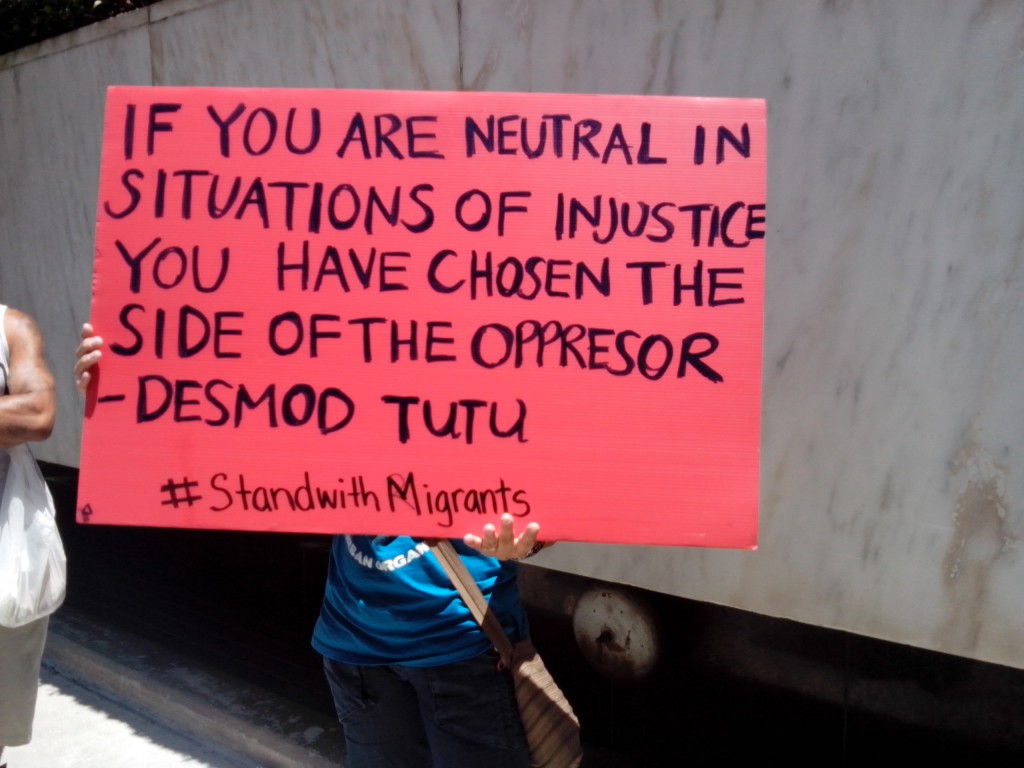