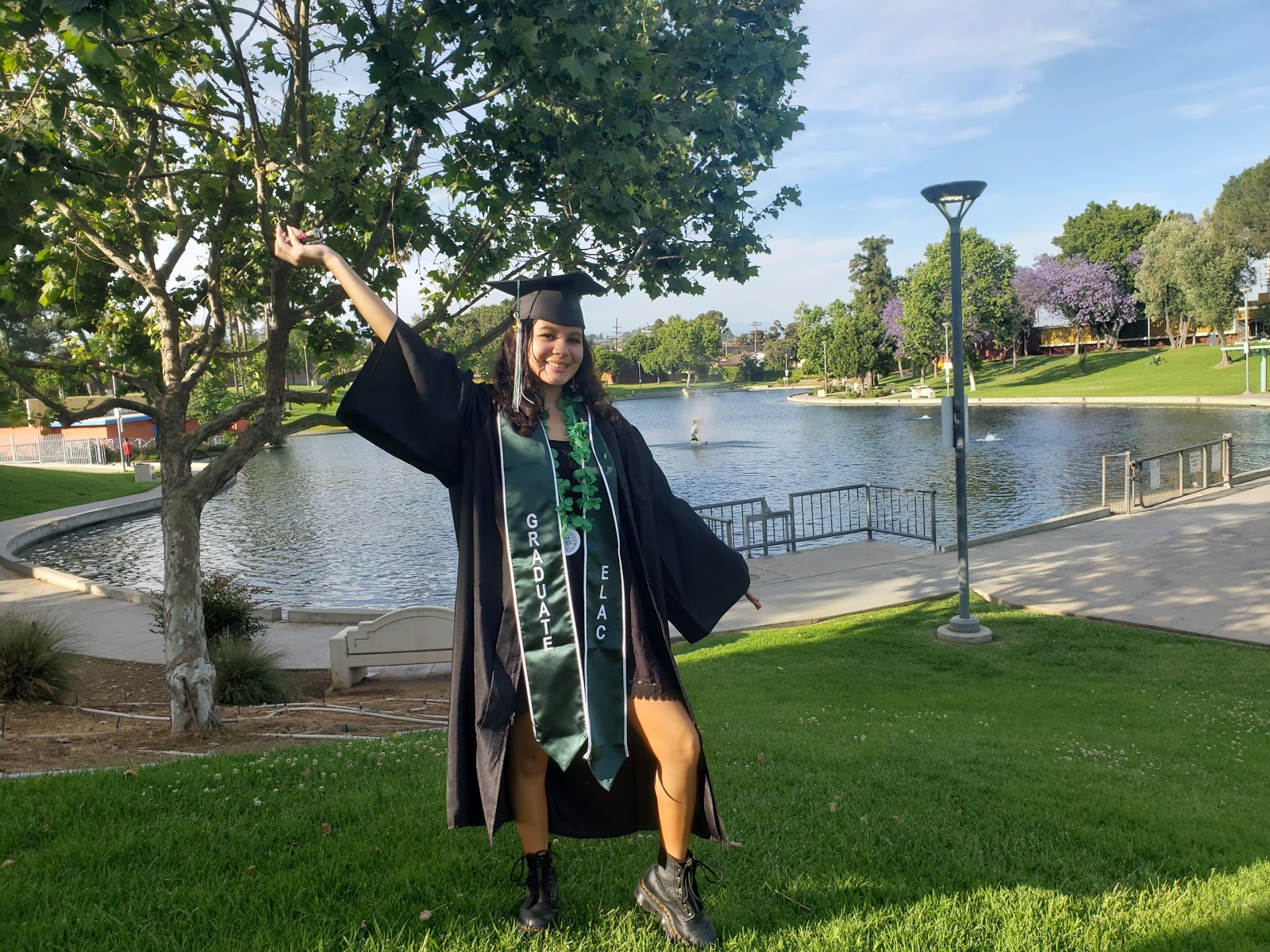 One way you know you are growing up is when you learn new things about the world you thought you already knew. This was the case for me when I first started UCLA. I was born and raised in Boyle Heights, a neighborhood in East LA. I already knew what LA looked like to me, but when I first arrived in Westwood on Move-In Day, my idea of home became different.

East LA is the east side of Los Angeles that consists of predominantly Latinx, undocumented, and low-income communities. Though East LA has heavily influenced LA culture, it is often neglected due to the idea of “Hollywood LA,” the idea that Los Angeles is a city where only rich, boujee, white, elite people with easy jobs such as social media influencers, successful YouTubers, models, and actors live. This idea has been ingrained in every non-LA native as they pursue an unrealistic, industrial, BIPOC exclusionary lifestyle that harms and erases racial and ethnic communities such as East LA.

Many don’t know this, but Los Angeles once belonged to Mexico before the United States owned it. Even then, Los Angeles was home for many Mexican and Chicanx people and continues to be. Chicanx culture and lifestyle play an enormous role in modern LA culture. Yet, many don’t recognize it and even oppress Latinx communities in Los Angeles because they don’t fit the “Hollywood LA”culture white elites have created.

To reclaim power and space, East LA natives speak about the real Los Angeles they grew up in: East LA. 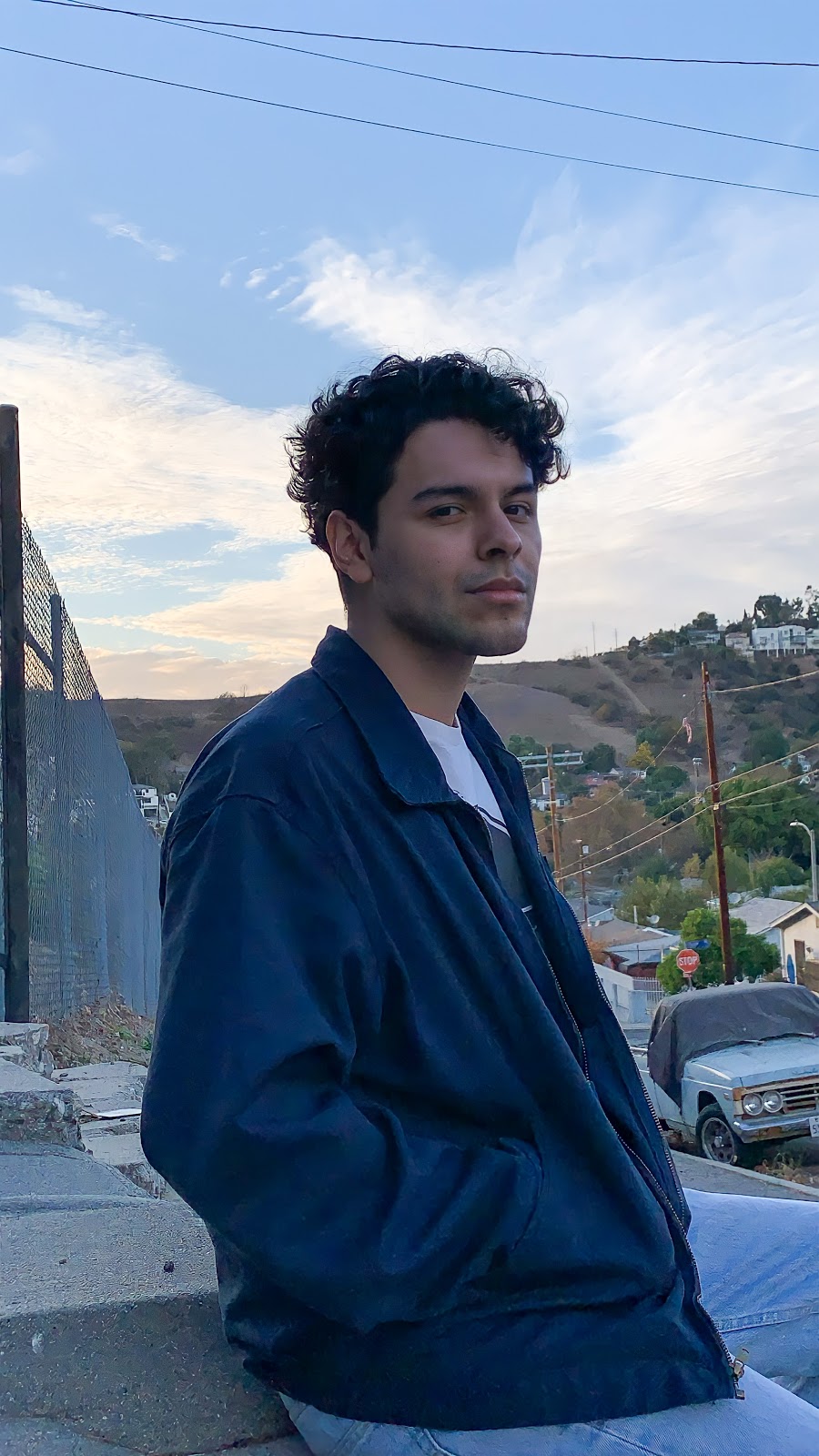 “I think that’s one of [the biggest] misconceptions, [LA people are] all just superstars, we’re all from Beverly Hills, we all have cleaning ladies… when actually our families are the cleaning ladies.”

Ariel Miranda (he/him) is a Chicano, LA native who was born and raised in the East LA neighborhood El Sereno. His family arrived in El Sereno when his mother migrated from Zacatecas, Mexico to East LA, where she met with her childhood friend and settled in the neighborhood. He now attends California State University, Los Angeles, and is pursuing a B.A. in English.

“When I think of whitewashed LA, I think of victims of gentrification. I think of places like Highland Park, Echo Park, Silverlake… My dad lives in Cypress, near Highland Park, and I remember going there when I was younger and it was nothing like how it is today, you know? I drive by there today, and there are little coffee shops that also teach yoga. There are fusion restaurants. I mean, c’mon, that’s white people stuff.” Whitewashing LA is essentially modern colonialism, as luxurious, expensive establishments are imposed in the communities of BIPOC that erase the cultures, lifestyles, and people of those original neighborhoods. Because BIPOC don’t have access to these luxuries, they are erased from Los Angeles communities they once called home

Ariel shares that “a lot of celebrities see living in our neighborhoods and communities as tough, but that Hollywood will do something to improve their image, like ‘look at me, I’m in a tough neighborhood.’” For [celebrities], we’re just a backdrop for a three minute music video, but for [us] it’s [our] actual life.” Ariel highlights that people who live the glamorous LA lifestyle use Latinx neighborhoods for these purposes. They use LA as something they can gain from, but never stop to think about how they can uplift and represent our communities and voices in the media accurately. 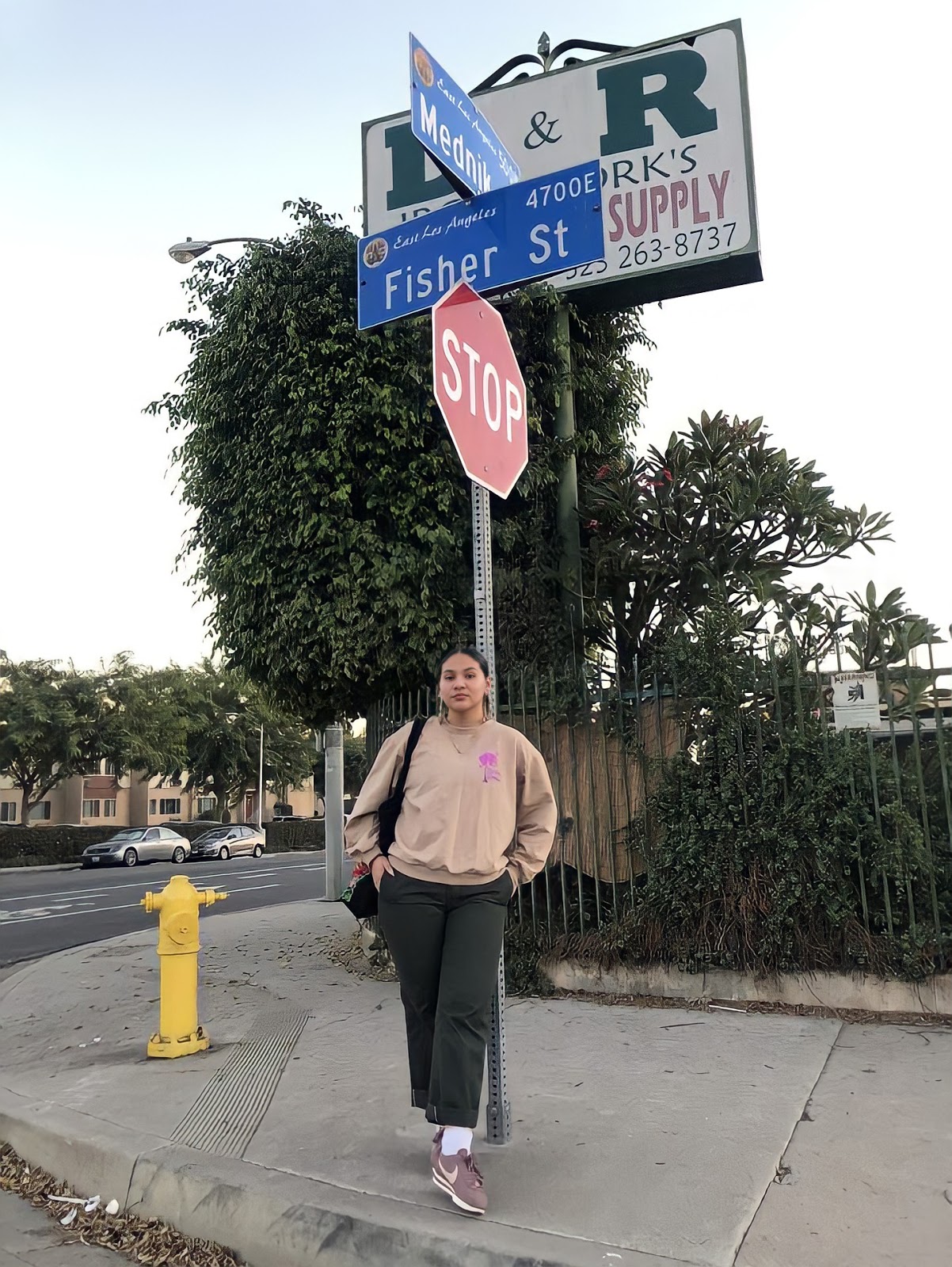 Mia Berber leaning on the street signs she grew up in East Los. Submitted by Berber.

Mia Berber (she/her) is a born and raised East Los Chicana who is also an LA native. Her family settled when her grandmother migrated to East LA from Puebela, Mexico, and met her husband, a Chicano from Boyle Heights. The two then had Berber’s mother, who is also an East LA Chicana. Her mother met her father in East LA, and the rest is history.

Berber is currently a performing artist studying dance at UCLA, so she has experience in the dance industry. Since she is also an LA native and East Los Angeles native, she knows how fake and harmful industrial LA propaganda can be towards BIPOC. “The biggest misconception… is that LA is fake, that LA is full of boujee people who are rich… That’s so annoying to me because that’s not LA. I think there’s LA industry culture, and then there’s LA culture. I think LA culture is Black and Brown culture and community, and understanding that as a community of color we have each other’s backs, and the fact that us POCs created LA culture.”

East LA communities are often neglected from the idea of Los Angeles because it doesn’t fit the elite narrative people have created. Not only does this not recognize Latinx, Chicanx, and other BIPOC influences on LA, but it also creates negative, stereotypical ideas where our neighborhoods become known as “the ghetto,” the “bad side of town,” and seen as “dangerous.” However, many East LA folk see beauty and strength within their neighborhoods. Berber shares a description of her home and smiles, “The moment I get off the 770 bus, it smells like flowers, fresh flowers from the people selling them around the corner. It’s just bright. I feel like when I come home… color just stands out more. The sun seems like it’s shining more. There are just flowers everywhere. That’s what I love. It’s busy because we’re hustlers… East LA is full of nothing but hustlers who work for their shit. It just smells fresh to me. When I come home, I feel refreshed.” 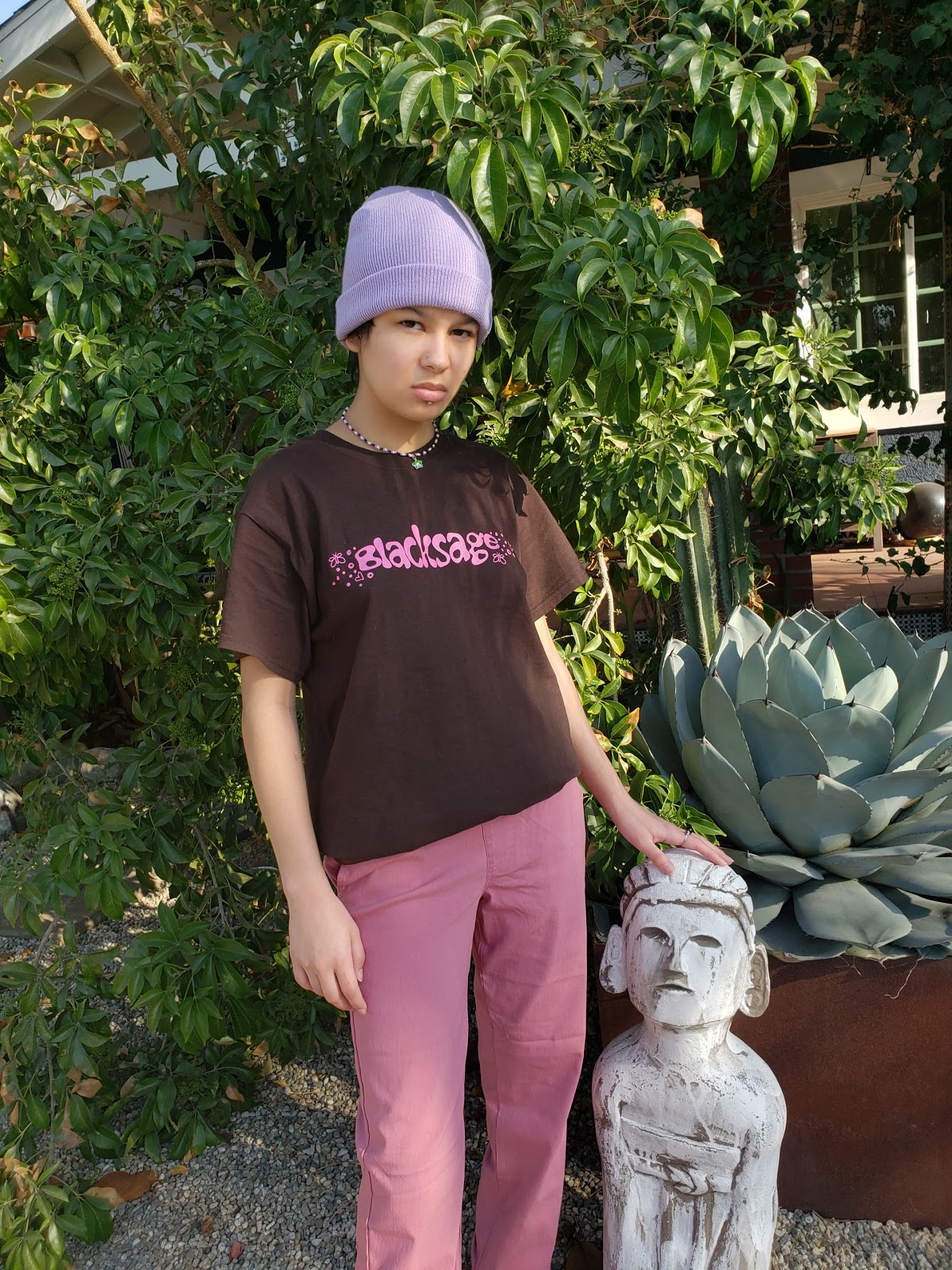 Luka standing in front of their home in East Los. Submitted by Gidwani.

“First thing [East LA] is very lively! During certain times of the year, like New Years or January all the way to Fourth of July, it’s just fireworks… You’ll always hear parties or music playing… My favorite [thing] is that there’s lots of stray cats and dogs!”

Luka/Isa Gidwani (they/he) is a UCLA transfer student who graduated from East Los Angeles College (ELAC). Luka has lived in Belvedere Gardens for about 8-9 years but originally lived in Hollywood until their family moved for housing security and safety. Luka also spent most of their childhood in Highland Park/Montecito Heights.

Like many, Luka appreciates and admires East LA for its beauty, culture, and how it has shaped who they are. Specifically, Luka appreciates the programs and institutions East LA provided for them. ELAC is a community college in the Monterey Park area, a middle-class neighborhood next to East LA. Still, many East LA residents attended the school and took advantage of the resources and opportunities there. For Luka, ELAC introduced them to classes relating to their identity the most: Chicanx and gender and sexuality courses. Luka is now majoring in philosophy, which Luka says is “super dominated by cis-hetero, men, which is just like, literally the opposite of everything I am!” Still, Luka is motivated to pursue this major. “Because of all the experiences I had at ELAC, it made me want to kinda change that and bring different perspectives to philosophy. It’s very white centered, when I don’t think it should be.”

Additionally, ELAC introduced many community programs that have inspired Luka. Luka experienced sexual assault and different forms of molestation growing up, and when they attended ELAC, their depression and PTSD hit hard for them during this time. “I joined the honors club… and through [it] we would partner up with other clubs at ELAC. Through them I found out about the East LA Women’s Center… They have this annual candlelight vigil… its an honor of people who have survived and have been victims of domestic violence and other forms of sexual violence too. I participated in that as a volunteer and it was really cool because I ended up leading the chance and leading the walk… it was really cool just experiencing that and the community getting together in support of people who have experienced domestic violence. It made me feel very empowered, and that experience really pushed me to… [transfer] to UCLA from ELAC… that’s how [East LA] has positively impacted me.”

East LA is a crucial part of Los Angeles that many people tend to forget since the people, culture, and lifestyle don’t fit into the capitalist, white, rich ideas many have created. However, we exist. The hardworking people exist. A beautiful culture exists.

“I take pride in who I am, and love myself. I think that’s a good form of resistance against the whitewashing of LA and misconceptions about LA.”

Write for Your Eyes Only

Killer Hospitals and COVID-19 in Mexico
Scroll to top