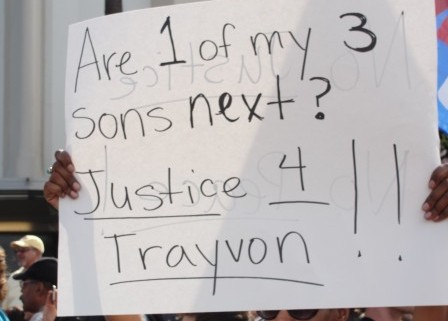 It’s my senior year of high school and I remember how cold it was this one day at soccer practice. Playing in 30 degrees I bundled up, putting on my Knight Hawks soccer hoodie. Saturday practice ends, I get into my car and drive home, where my mom was doing laundry in the garage. I say hi and she tells me to never drive with my hood on. I tell her that I am cold and what was the big deal. She says I could pass for a boy with my long curly hair hidden by my hood. I wondered why my mom cared about me looking like a boy. She said I could appear menacing to other drivers on the road. In my ignorance of having grown up in a racially diverse community I didn’t understand the profoundness of her statement. The lessons she gave and the explanations of what she said she’d seen didn’t have examples until Trayvon Martin.

My mother said she wanted to protect me from possible harm by dispelling any negative thoughts thrown my way. See, the thing is not only would I look like a boy, but I would look like a Latino boy. The tan, dark olive complexion of my face would be the only thing other drivers see. That would be enough for other drivers or even officers to form an opinion, to perceive me as menacing, to demonize me. As a girl, she says, I am not viewed as a threat.

But I was at home, in a known neighborhood, and I am a girl. Trayvon’s situation had none of these. On that rainy day, he pulled his hood up as a form of security, but his hood became an added layer to the nasty practice of racial profiling.

George Zimmerman has been found not guilty in a case in which Trayvon was not alive to give his account of what happened. The public will never know the truth of what really happened that day without hearing both sides of the story.

Yet, one thing is clear. Race is still a dominant factor in the U.S. Individuals argue that we live in a colorblind society, yet they just have to look at this case to realize we do not. From the first news accounts of what happened that day, it was seemingly not a story of a man killing a boy but of white versus black. Communities of color are bound together by the death of Trayvon. His death is the sad but extreme result of what occurs when individuals of all races are quick to judge one another.

Demonstrations following the verdict have surfaced nationwide: Florida, Illinois, New York, Colorado, and California among others.  Demonstration signs across the U.S. have the words “We Are All Trayvon” written on them. Communities of color, including mothers, fathers, and male and female youth, are speaking up because they see someone they know or see themselves in Trayvon Martin.

Below are photos and videos by Gentista Michael Reyes at a demonstration on Crenshaw Boulevard in South Los Angeles. 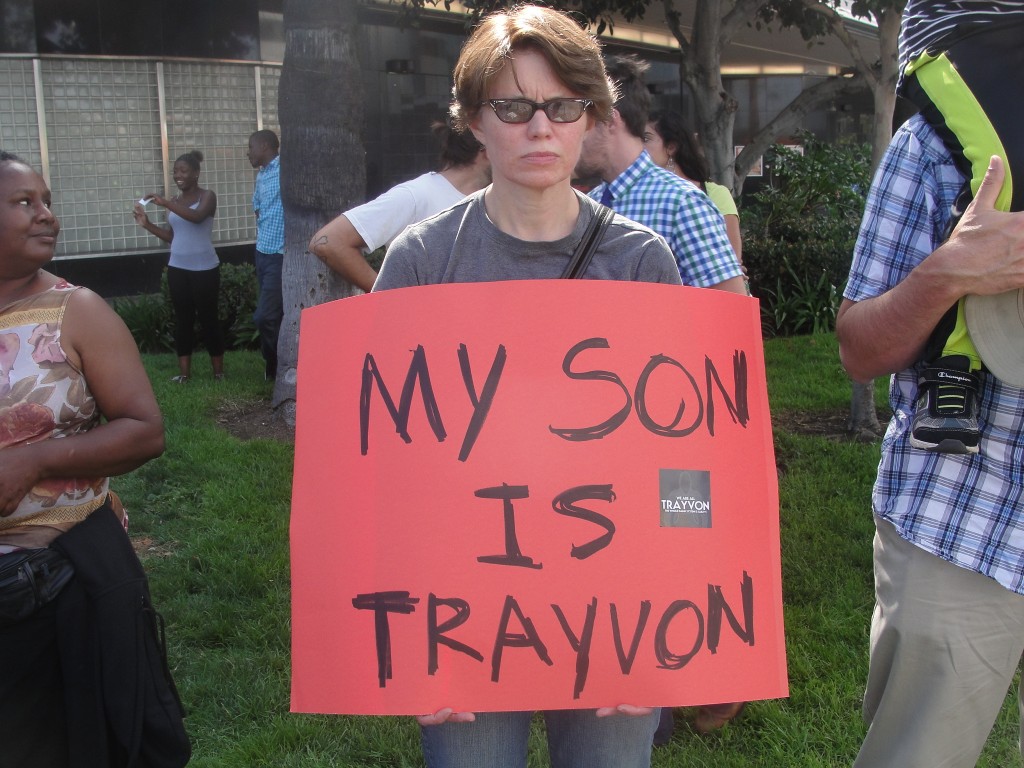 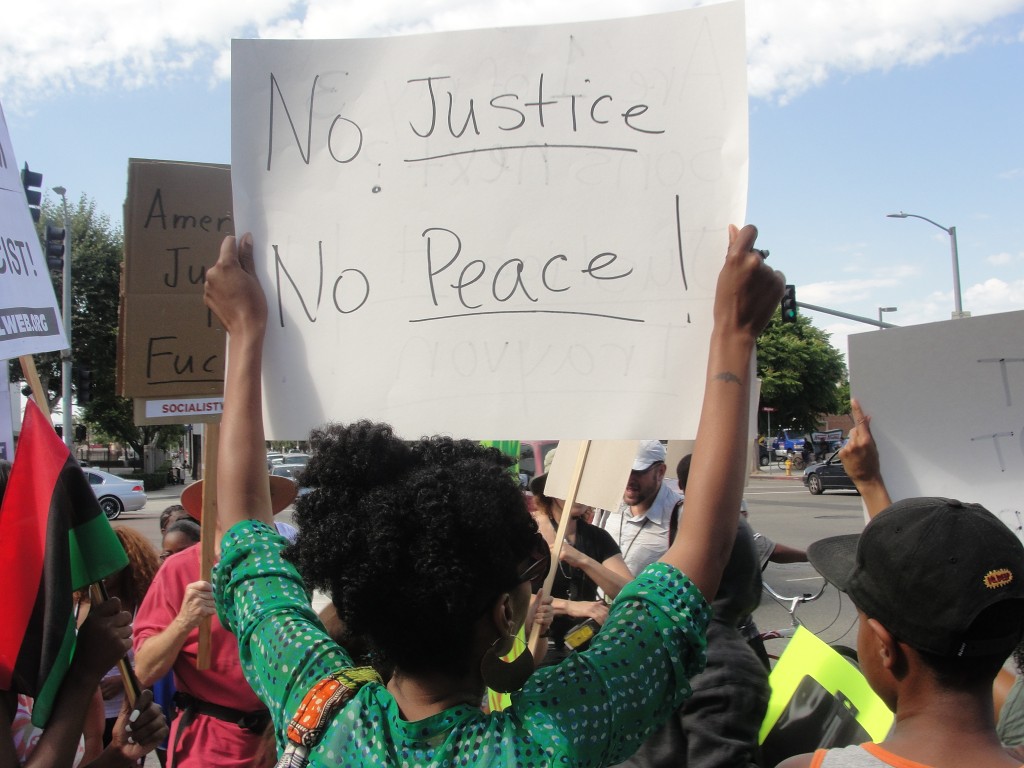 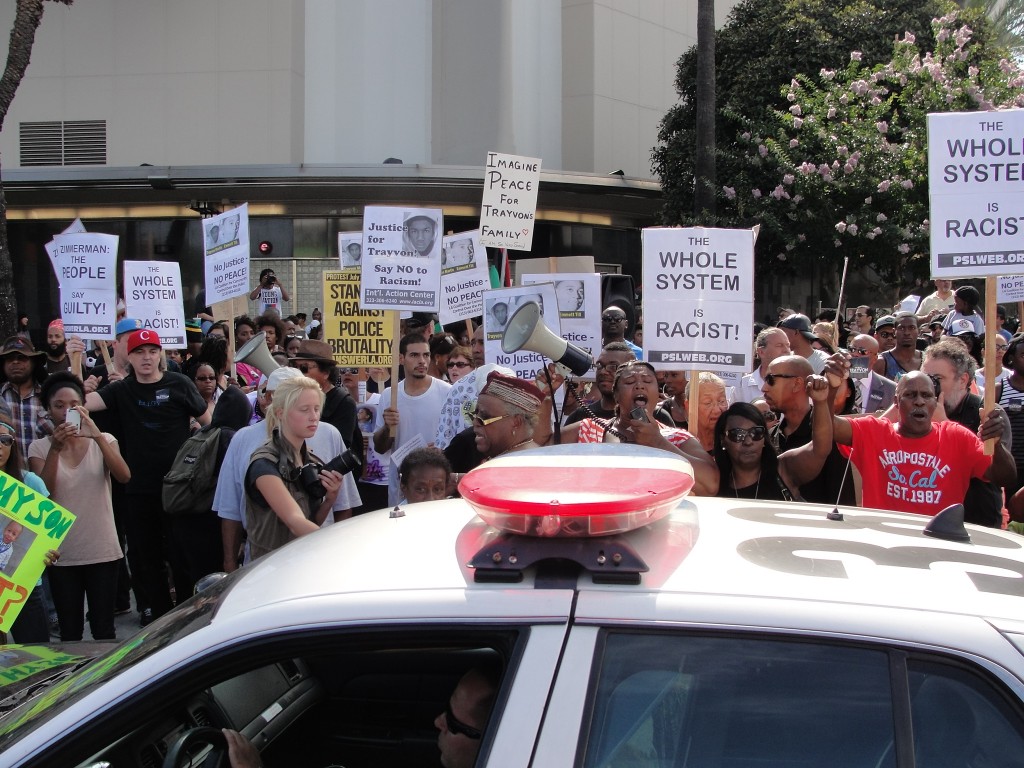 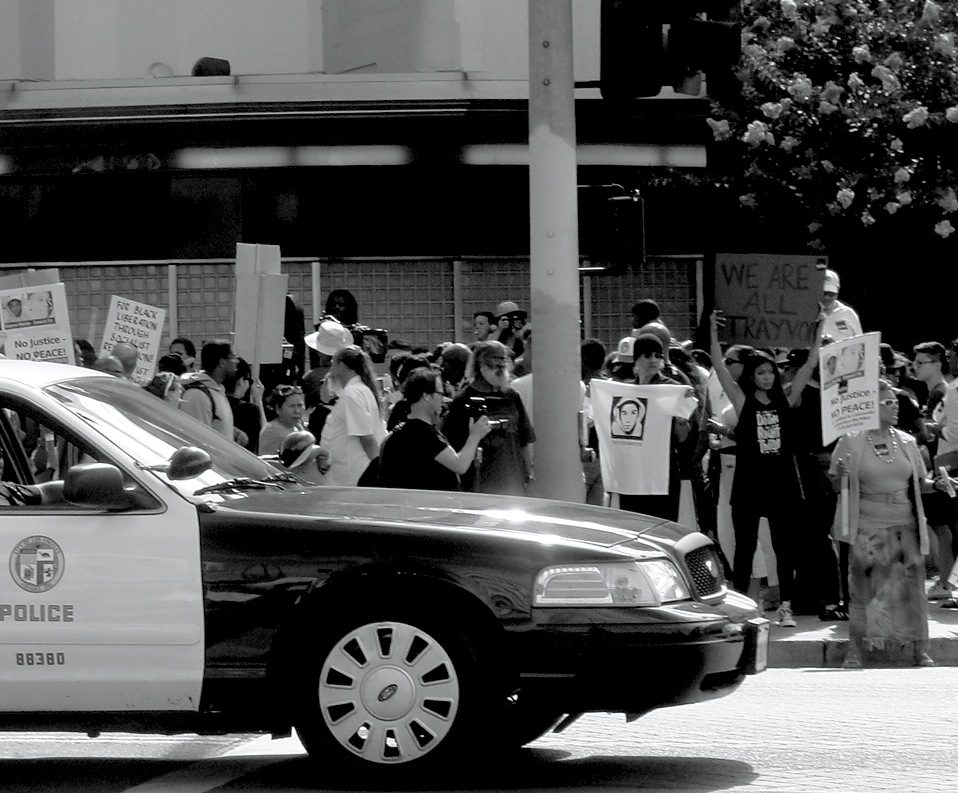 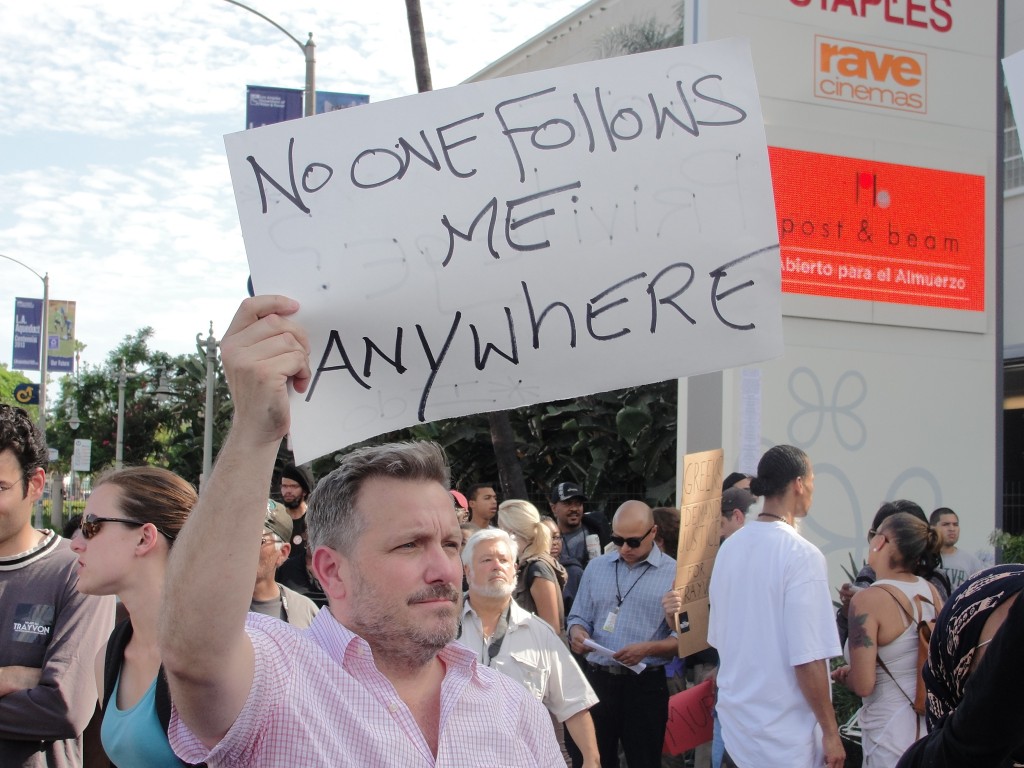 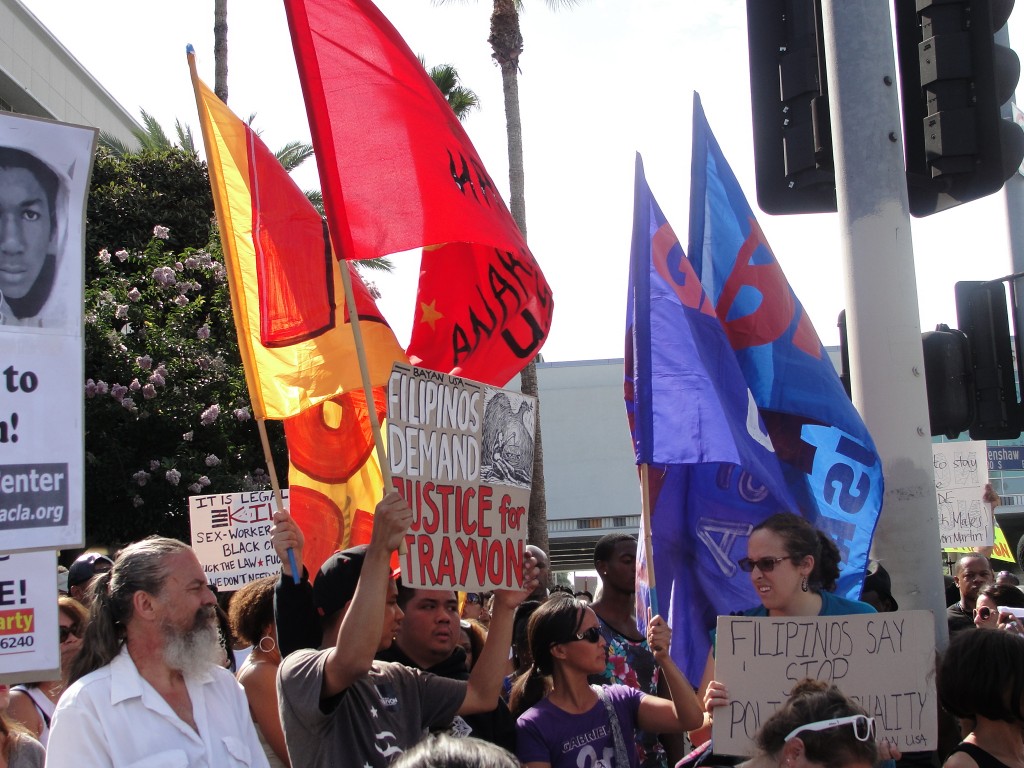 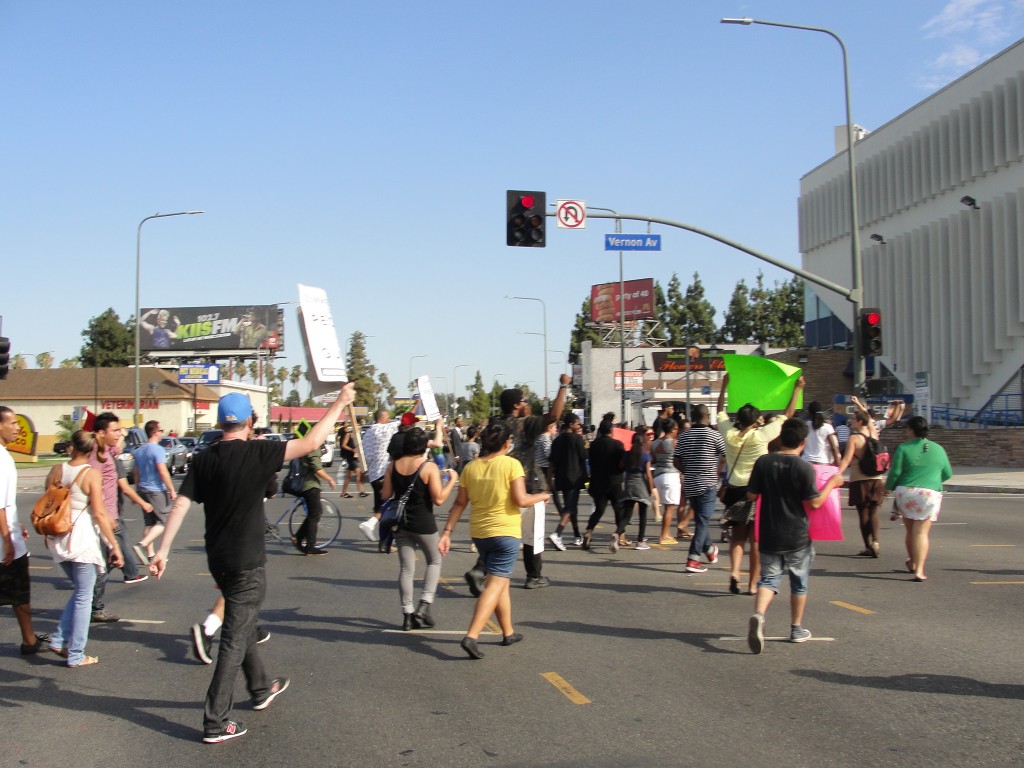 SnapFotos: Art in the Streets
0 replies

Support for hunger strikers at Corcoran prison
Scroll to top