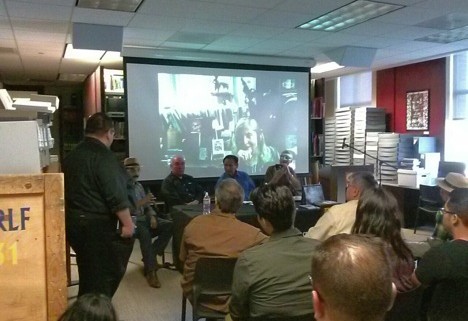 Professor Milo Alvarez moderated a discussion that revolved around the founding of the Brown Beret organization. The panel was composed of founding fathers and members of the Brown Berets David Sanchez and Ralph Ramirez along with Rona Fields.  The discussion took place on May 21, 2014 from 3p.m.-5p.m. in the Chicano Studies Research Library located inside the Haines Hall in the UCLA campus.

In the 1960s, in the midst of the emergence of revolutionary movements across the nation, the Brown Beret organization established itself as the vanguard of La Raza.  The organization was founded by young Chicano militants who wanted to join the social justice causas that were taking place at that moment. Their main focus was cultural nationalism, so they saw any Mexican-American as a potential Chicano. Their main purpose was to stand against institutionalized violence and discrimination, particularly within the educational system.

The Brown Berets gained popularity among the barrio youth throughout the United States, primarily because they promoted the causa Chicana of bringing equality in education. They can be credited with the East Los Angeles walkouts (also known as Chicano Blowouts) that occurred in 1968 as consequence of unequal conditions in Los Angeles Unified School District high schools, particularly those with students of color. By extension, they are also credited for the establishment of the Chicano Studies programs across the nation. 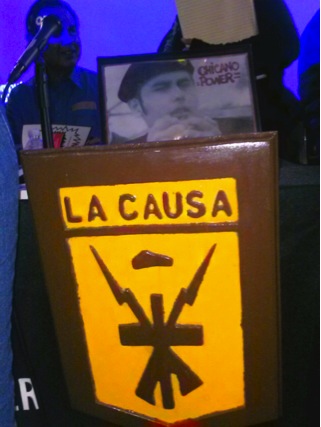 The organization also expanded from its demands for educational reform to anti-war demonstrations. By creating a movement within the movement, the Brown Berets’ Chicano Moratorium, was able to educate Chicano communities from 1969 through 1971, about the dangers of the Vietnam War for Chicanos serving in the Armed Forces.

During the Brown Berets movement, members focused on the issue of educational reform and anti-war sentiment. Even though the organization was composed of a diverse body of Chicanos and non-Chicanos, they often faced oppression and infiltrations by government agencies not only for their racial and ethnic background but also for their political views. During the discussion, some of the members stressed that not all of them were socialists, and differences of political views were present, but despite those differences, they always prioritized their focus to the issues of inequality.

The members in the panel were able to discuss several issues and influences. Among those influences, many expressed that the African-American movements of the time were very crucial in their organization. In particularly, the Civil Rights movement led by Martin Luther King, Jr. as well as the Black Panther movement proved to be inspirational and also cautionary tales to the Brown Berets.

Women’s roles were also addressed during the discussion, leading to different perspective from an all-male panel (with the exception of a female professor who was participating via Skype but who was not a member of the Brown Berets). Ultimately, after Professor Alvarez addressed the sexism that many women members expressed they experienced, a member in the panel attributed the success of the movement to the work of women from free clinics to the front lines. They were described as being the “brick and mortar” of the organization.

The panelist and Brown Beret member, David Sanchez, stated that he is running for the 40th Congressional District that encompasses East Los Angeles along other adjacent cities. He asked for the support of the audience in his new endeavor. Sanchez also stated that his main focus was the promotion and continuity of Chicano Studies programs in Los Angeles County. 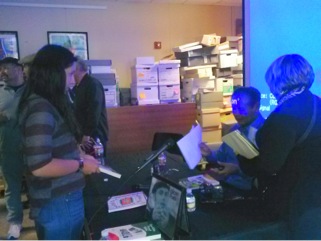 From Nada to Impresionada
0 replies