Ever heard of a spelling bee that allowed you to consult the dictionary, skip to the next round, or make up a word? 826LA, a non-profit writing/tutoring center for kids, hosted A Spelling Bee for Cheaters, for participants who had obtained donations for the organization.

Jimmy Kimmel stands in front of the judges

The event took place in the school’s auditorium with Abraham Lincoln’s quote, “Teach hope to all, despair to none” mounted on the sidewall, appropriate to the collective goal of teaching children. The crowd of friends and supporters excitedly sat down waiting for a show that rewarded the fundraising efforts.

The spellers raised money, created spelling teams such as the Bees’ Knees, Stop the Presses, MC Grammar, and Spell Bound, and even got to dress up.

Besides the celebrity donations, teachers and students also showed their dedication to this program.
“Anything I can do for kids,” said Cecillia Jurado, a high school teacher from Orange County. Her team, dubbed Team Rice and Beans, raised $470 by asking for donations through her midnight radio show.

Spellers took stabs at words such as “Babbitt” or “Hallux.” Each word became increasingly difficult, but the goal of raising money had already been achieved.

Aside from being a cheating speller, there were numerous volunteers informing audience members about 826LA. Volunteer Maggie Woo, though a part of 826LA for only seven weeks, has already become attached to her students.

“While working with the kids, there can be three hours of nonstop laughing,” said Woo.

She showcases the free programs available to students, which include writing workshops on various topics such as critiquing food or spoken word. 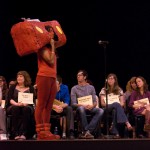 The Bad Robot goes up to the mike

The audience laughed as the kid in the Bad Robot costume refused to leave the stage, and another strung letters together hoping that it somehow created a word.
The last person standing received a trophy and a very large dictionary, while teams received prizes which included signed copies of ‘Where the Wild Things Are,’ LACMA memberships, In-n-out gift cards, and a signed Chivas soccer jersey. The emcees said that the prizes were much better than the trophy for winning the spelling bee, but that didn’t stop anyone from leaving with smile in their superhero, geek, or cat costume.

My Story: Latina and Lesbian
Scroll to top