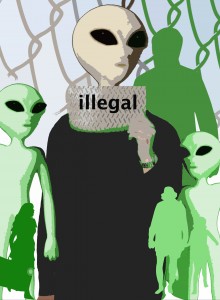 This is the image of immigrants popularized by mass media.

There is no denying the influential power that words possess in shaping how people perceive the world around them. It is precisely this reason why the word illegal must be consciously removed from popular discourse regarding immigration.

“The word illegal sets the tone of how you treat someone,” said Nancy Meza, a UCLA alumna. “We need people to stop using the word illegal because it stops the conversation. When you call someone illegal you’re already demonizing them. This narrows the scope of understanding why immigration happens.”

Identifying herself as undocumented and unafraid, Meza stated that being unafraid means you are public about your status and what you go through as an undocumented person.

The use of the term illegal in mainstream media stigmatizes undocumented people by reducing them to criminals.  Subsequently, the veiled message the word conveys acts as a mechanism for racially-motivated attacks.

There is a direct link between the anti-immigrant message conveyed across popular media outlets and the atmosphere of violence and hate that manifests itself on the streets.

According to a 2009 report by the Leadership Conference on Civil Rights Education, the increasing number of anti-immigration commentaries from high-profile national media personalities “correlates closely with the increase in hate crimes against Hispanics.”

The toxic manner in which the term illegal is irresponsibly spewed through the media is a catalyst for violence.

In July 2009 two men beat and stabbed 45-year-old janitor Maria Guadarrama in Orange County. After taking her wallet, they are reported to have said, “You’re worthless, you’re Mexican.”

On Oct. 14, 2010 two men in Shenandoah, Pennsylvania, were convicted for the racially-motivated murder of Eduardo Ramirez Zavala. They are reported to have said, “Go back to Mexico,” and called him a “fucking wetback” as they beat the father of three to death.

News anchors, pundits and politicians on both sides of the debate use the term illegal. Its repetition has created a negative connotation that overgeneralizes and robs people of their humanity.  By calling undocumented people illegal, hardworking immigrants are unfairly cast as pedophiles, drug smugglers and murderers.

Linguist Otto Santa Ana, Associate Professor with the UCLA César E. Chávez Department of Chicana and Chicano Studies at UCLA, has actively researched the representation of Latinos in print media.

“Those who favor the term illegal claim that unauthorized immigrants are criminals who deliberately violate US law. The argument continues that once in the US they abuse its social services, so they merit only punishment,” said Santa Ana.

Guevara has lived in the US since she was a child and considers herself an American.

“If you know the story about undocumented peoples, you see they are not all these things, we’re people,” said Guevara.

We are all Ferguson. We are all Ayotzinapa.
0 replies