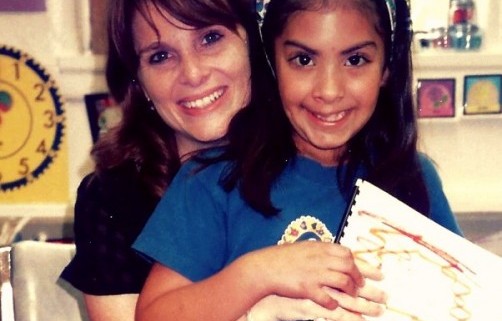 As a deaf Latina I grew up struggling to comprehend the idea that my voice mattered. I developed a voice, yet didn’t know how to use it. I thought too much about how I sounded rather than letting my sentiments be known. I let the stigma of being deaf plague me for years. I questioned: ‘Can a single voice have no limits?’

I was shy among my family and friends. I giggled a lot and considered myself an observer. I was on the sidelines of life; I saw what happened but never really lived my life. I didn’t know I was short of confidence, but I knew something was missing.

In elementary school my speech therapist Michelle Christie asked me if I wanted to join her theater group. I didn’t. I hesitated talking to people, unless they spoke to me first. She continued to invite me and I ritually declined. Low and behold, one day we had a class field trip to see her theater group in action.

I walked into the theater entrance in awe of the vibrant colored sets and lighting on stage. The program read: “No Limits for Deaf and Hard of Hearing Children presents the play ‘Timeless Journey.’” There were pictures of each actor and their bios. I saw a couple of my deaf friends in the program.

The next hour seriously changed my life. Here I was staring at my fellow deaf friends, watching them act, speak and perform. They were telling jokes and guiding this story. I waved at them when they were on stage. But they didn’t wave back. They were real actors that didn’t break the fourth wall. The lights and sound effects and the costumes were just the icing of the whole production. It really was a production.

I remember seeing Michelle sitting on the right side of the audience. It was dark but I could tell she had a head set on with a microphone. She had her hand over her mouth and as soon as she moved it, she revealed this massive smile. She giggled and even said some of the lines with the actors. She looked so whole. She was smiling from ear to ear.

I remember when the play ended I was floored at how moved I was. I found myself staring at a place where I knew I wouldn’t be judged for being deaf and using my voice. The room exploded with applause. After the show, a music box melody turned on. The stage lights transitioned from yellow to a soft blue hue. The youngest actor came out on stage. He smiled and began to say, “I can be a doctor.”

Everyone was clapping and hollering with liveliness. Each child came out from back stage and had their moment to say what they wanted to be when they grew up. Some wanted to be lawyers and singers. Finally, the 12 deaf and hard of hearing kids on stage, one by one, exclaimed that they could do it one day. “I can do it,” each one said. And then finally, in unison, they all said, “We can do it!” The audience just couldn’t contain themselves. Immediately, I wanted to radiate like them. They had something I had lacked. They were oozing with confidence.

From that moment on I have been a part of this amazing organization. I rehearsed lines, made friends and even wore costumes. Michelle Christie, founder of No Limits, always urged us to be loud, and if you skipped a line, to keep going. She said that to have confidence we must believe that we can do it. Michelle taught me that to have confidence we must have commitment, saying that ‘I will do it.’ In order for us to have commitment we needed to have perseverance, the ability to try and try again. I remember feeling like I was a part of this support group of children who were just like me, given a chance to use their voice without facing judgment.

After years of acting, I retired and became a volunteer as a crew member. At age 16 I was now backstage of a show, cueing the kids to go out on stage to conclude the show with a bow. I finally understood truly what Michelle felt that day when her students spoke on stage. That teary-eyed face is literally tears of joy from knowing that the child nailed the line that took him or her weeks to practice. That ear-to-ear smile is pure excitement that the child was able to not only say his or her line but project their voice with utter confidence for everyone to hear.  It’s just an amazing moment to have things come in full circle—seeing Michelle smile and feeling myself smile from ear to ear.

No Limits for Deaf Children has evolved from a summer program outlet into a National Theater Program and a non-profit organization that provides speech therapy free of charge to lower income families. Located in Culver City, No Limits is the first theater company in the nation that helps Oral Deaf and Hard of Hearing actors to speak on stage. Michelle has broken boundaries and changed the lives of many deaf and hard of hearing children and their families. She has made speech therapy fun and relevant for kids. Michelle believes in advocating for children. She has always in some way, shape, or form advocated for me.

Earlier I had asked if a single voice can have no limits. The answer is yes. Confidence correlates with having no limits. Having no limits to me means being boundless even at times where you may encounter failure. It’s the ability to try something and say, “Hey, at least I did it.”

When I performed for the No Limits Theater Program I always said, “I can be a writer.” And in some way I did. Michelle has taught me many life lessons—one being to embrace life with confidence. So it is with confidence that I write this and leave you with a question: Does your voice have no limits?

If you would like to know more about No Limits and their non-profit visit their website, nolimitsfordeafchildren.org.

SnapFotos: Art in the Streets
0 replies