The emerging group on campus, Mujeres Activas en Letras y Cambio Social (MALCS), has taken on a complex task: to create a safe communal space for female minorities. MALCS welcomes all women to openly discuss their unique experiences at UCLA in a supportive and safe environment. Their philanthropic work on campus, however, isn’t new.

Adaljiza Sosa Riddell and a group of graduate students founded the national chapter of MALCS at UC Davis in 1982. MALCS originally emerged as a student group at UCLA in 2004 through the efforts of a group of Chicana/o Studies students. The chapter, however, lost momentum after many founding members graduated in 2006.

But MALCS de UCLA is on its way back to fulfill its mission to offer a safe space to empower women of color in academia. Rosie Bermudez, founding member of MALCS de UCLA, is now working with current students to re-establish this organization. Bermudez recalls, “It was such an amazing space for women of color to come together. It was just an amazing experience and I want to bring that back to UCLA.”

Cheye-Ann Corona, a second-year graduate student in urban planning, sees this organization as a space where she can simply talk with people that listen and identify with her. “Coming from the communities that we come from, especially as women of color we have a strong sense of family and community, and when we come to the academic institution we lack that,” she says.

The revitalized chapter has not been officially established as a student organization on campus. However, they are coordinating meetings, hosting events, and actively recruiting members to rebuild the chapter.

MALCS de UCLA is a cooperative organization, and this is an essential part of member involvement. Maira Sanchez, a third-year, recalls an International Women’s Day event with Susana Baca, “Everyone just helped out in every way that they could and it just all came together. I think it’s wonderful that we can all just create something out of a communal space.”

MALCS offers women at UCLA a place to share how cultural experiences shape academic experiences. Corona sums it up, “When it comes down to it, these women are your homegirls.” 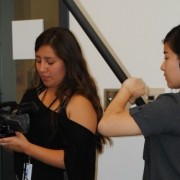 Interning for a future
0 replies