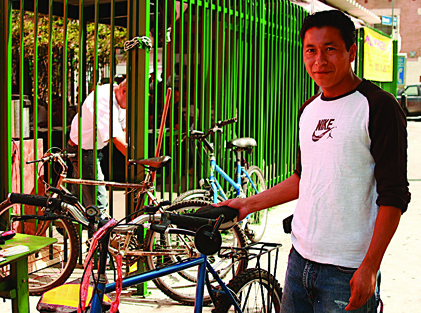 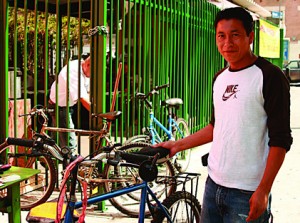 In the busy streets of downtown Los Angeles, you can see them whiz by on their bicycles before the sun rises and then again just as it begins to hide under the horizon.

Tackling the auto-congested avenues and boulevards of L.A.’s major streets day in and day out, the city’s Latino riders rely on their pedals for work, errands, play and all that is in between.

They do not ride because Al Gore’s “An Inconvenient Truth” inspired them to reduce their carbon footprint or because they believe in their civic right to “reclaim” public space. Cycling for them is no doubt a joy, but they mostly ride out of necessity.

The majority of them are low-income, immigrant workers who depend on their bicycles mainly because of affordability. Most would not be allowed to operate a vehicle even if they wanted to due to their immigration status.

Allison Mannos, an Asian American Studies student and senior at UCLA, noticed that although Los Angeles is beginning to witness a growing cyclist movement, Latino riders unfortunately take no part in the advocacy and political dialogue.

“It was important to me to reach out to Latino cyclists because they often are left out of discussions about bettering communities and bikes,” says Mannos.

An avid cyclist and transportation activist, Mannos first learned about the challenges faced by this group after reading a 2004 study published by the Los Angeles County Bicycle Coalition (LACBC).

The study found that Latino cyclists lacked access to bicycle safety education and information about their legal rights on the road. Moreover, at the base of the problem was the absence of basic safety gear, such as lights and helmets.

After being hired by the LACBC in early 2009, Mannos jumped on the opportunity to create a new campaign that would help bridge the disconnection between the Latino cyclist population and the larger bicycle activist network.

The City of Lights, or Ciudad de Luces, campaign has diversified the cyclist advocacy movement by reaching out to Latino cyclists housed in day-laborer worker centers in downtown L.A.

At the forefront of City of Lights’ educational component is third-year sociology student Andy Rodriguez. “Our goal is to not only teach bike safety and legal rights workshops, but to have the guys spearhead their own culturally-educational bike classes and rides” says Rodriguez.

Led by two certified bicycle mechanics from the Bicycle Kitchen, a non profit organization that spreads and fosters bicycle expertise, the weekly maintenance and repair classes motivate students to build on the mechanics skills they already possess, stressing that they also learn from each other.

Enthusiasm for cycling runs high at the day-laborer sites visited by City of Lights. “Promoting bike-use is good. It benefits all in many aspects. It is 100% healthy and it does not contaminate”, says Latino cyclist Cesar Herrera, who is a day-laborer at the Central American Resource Center.

With the leadership of Mannos and Rodriguez, a more inclusive and diverse bicycle movement in Los Angeles looks pretty promising.

Denied the Right to Vote
0 replies

Can you read this?

Rebuilding MALCS: A space for female minorities
Scroll to top