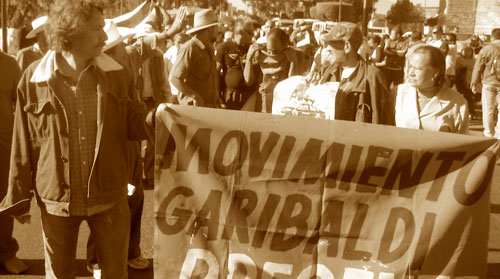 MEXICO CITY—It comes as no surprise that this year’s climate summit, COP 16 in Cancun, is working through an unambitious agenda and low expectations.

On the ground in cities throughout Mexico, activists engaged in climate work are converging through public demonstrations as they make their way to Cancun on Dec. 3.

One of these groups is organized by Via Campesina and includes more than 300 activists making their way from Acapulco, Guadalajara, and San Luis Potosi to Mexico City and then on to Cancun.

Converging through rallies, marches, and civil disobedience, the Via Campesina caravans are meeting with allies in various towns and cities, alerting local populations about the Cancun summit and picking up new passengers at nearly every stop.

On the first day, 30 new passengers were picked up in this reporter’s caravan.

“We are in a critical moment. This week we can tell politicians that this is our land. We come from powerful indigenous communities and we demand that our voices be heard,” said Dania Flores of Direct Action for Rights and Equality based out of Providence, Rhode Island. “This is cyclical. Today we must defend that which Zapata once defended for our towns.”

Along the way, caravans have met with the electric workers’ union, the teachers’ union in many towns including the Malinche neighborhood on the outskirts of Mexico City, where more than 500 local activists welcomed the caravan with a rally for climate and citizen rights. Activists in Malinche are struggling against the proposed expulsion of 200 to 300 long-time residents in favor of a superhighway project.

It´s difficult to estimate how many will travel to Cancun given the cost of travel for international delegates and the difficulty posed to Mexicans who already face high living costs and unemployment.

The Via Campesina caravan currently has more than 300 delegates, including representatives from the Indigenous Environmental Network (IEN) and the Global Justice Ecology Project.

Official UN Summit delegates represent 163 nations. Delegates to the Alternative Global Forum for Life and Environmental and Social Justice, which takes place at the same time, represent one of three main carbon dioxide emitters: the United States, in addition to France, Mexico, and many others.

While COP 16 delegates will work toward an international treaty to curb greenhouse gas emissions, alternative summit delegates are working to voice their dissatisfaction with short-term, business-oriented solutions.

Neither group expects final solutions out of their convenings. For activists, success will come in the form of renewed support for the People’s Accord that came out of last year’s Cochabamba Conference , in addition to alliance building, and climate justice mobilizations organized around the summit .

Out on a Mission: NAK volunteers at a center for the homeless
Scroll to top