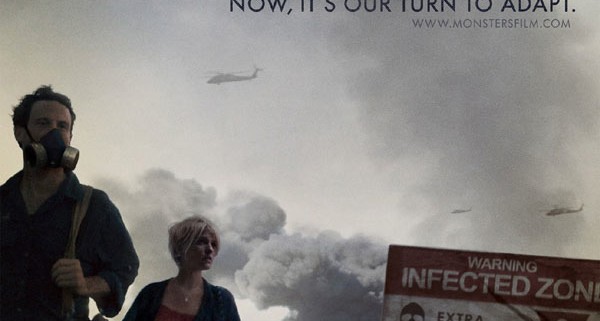 What do monsters, aliens and Mexican Immigrants all have in common? Apparently they’re all dangerous creatures that must be extinguished.
Well, at least that’s what the movie “Monsters” implies. This sci-fi thriller is more of a snooze filled with tired allegories of the present border situation in Mexico.

The film looks through the eyes of an American journalist who must bring his boss’ daughter back to the US. The problem is that aliens have invaded the border, making it near impossible to travel from Mexico to the US without encountering danger or death.

The political premise of the movie: immigrating to the US is hard. The American couple basically learns what it’s like for immigrants to reach the US. And in case you missed the allegory, the main character makes sure to mention how “it’s different looking at America from the outside.”

The exaggerated innuendos prevent the viewer from enjoying the movie as a horror flick and the movie ends up feeling more like a parody of immigration instead. In an MSN interview, the director Gareth Edwards denied that there was an allegory to immigration in the film saying “The allegory [I] was interested in was: You have a monster or an enemy or evil that you don’t like, and it’s like…at what cost is it worth destroying that monster?”

I disagree. Aside from taking place in Mexico and the main characters being American, there are many scenes that suggest negative stereotypes associated with immigration. Not only does the journalist haggle with the ferry officer, who is a glorified version of a coyote, he also loses a passport and must bribe officers to help him and his companion find a way to travel to the U.S. by land. Sound familiar?

Likewise, there is no sense of desperation or terror emitted from the characters. Traveling through dark forests, dark rivers, and unknown lands with the possibility of running into the octopus-like aliens would produce more panic than encourage a journey of personal reflection. The lack of tension and action from the monsters only add to the impression that the movie is a criticism to how Americans treat and view immigrants.

The director’s view of the movie as a general quip to the limits one will go to when confronted with a threat may have been believable if he hadn’t included a geographical conundrum. The American couple supposedly travels through the northern part of the Mexican border which is mostly desert land. But the couple ends up walking into a pyramid temple with a view of the border instead. The magical moment of the end scene is overshadowed by the pyramid’s unrealistic and odd placement. The movie just doesn’t live up to its intriguing premise.

Fall 2010 Letter from the Editor: The Immigration Issue