Immigrant bashing, like baseball, has become a favorite American pastime. The recent draconian, anti-immigrant law in Arizona only adds credence to this reality.

This pernicious law not only targets undocumented immigrants in this desert state, but also punishes Latinos in general, both legal residents and citizens. Apart from criminalizing undocumented immigrants with misdemeanor and felony charges, not to mention imposing monetary fines and imprisonment for deportation purposes, the law allows for the police and other authorities to stop and interrogate individuals “suspected” of lacking legal documents in this country.

In other words, the law, if upheld on constitutional grounds, allows for the police to single out individuals of Mexican descent, along with other Latinos, and interrogate them due to the color of their skin. Apart from skin color, what will prevent the police from randomly questioning the legality of brown-skinned individuals simply for speaking Spanish in public?

Apart from skin color and language, what about clothing? Will the police question individuals for wearing a soccer jersey from the Major Soccer League or El Tricolor, the Mexican national team? This seems to fall under “reasonable suspicion” since “everyone knows” that immigrants love soccer. Don’t they?

This very broad concept of “reasonable suspicion” provides the police and others with too much power to make subjective judgments against individuals based on phenotype, linguistic, and clothing characteristics. Where are the national Republican leaders, who argue vehemently against government intrusion on individual rights when we need them? Or do individual rights only apply for Americans of European descent?

This statewide law — which undermines federal jurisdiction of immigration regulation, commonly enforced by the U.S. Immigration and Customs Enforcement — inevitably leads to racial profiling. We’ve witnessed racial profiling against Arab Americans after 9/11, and now we see it in Arizona against Latinos. It seems like racial profiling only occurs against racial minorities. If not, we would have seen it against whites after Timothy McVeigh, a young white male, blew up the federal building in Oklahoma City. Whites, after all, also represent a racial group.

Essentially, this law represents a violation of civic rights against American-born Latinos and permanent residents. Speaking of permanent residents, under this law, any individual who fails to carry his or her legal document, proving their status in this country, will be subject to harsh consequences, such as financial fines and imprisonment. This type of policy goes back to the dark days of Nazi Germany.

This anti-immigrant hysteria goes beyond Arizona’s borders. Conservative politicians, talk-show hosts and average Americans frequently scapegoat undocumented immigrants for this country’s financial and social ills. For instance, many Americans commonly argue that undocumented immigrants represent a threat to the American way of life by taking jobs away from citizens, depreciating wages, depleting social services and causing financial havoc. While these simplistic arguments make for good sound bites on mainstream television, radio, and print media outlets, whereby fueling anti-immigrant sentiments and laws throughout the country, they are rarely substantiated with hard facts.

It’s dumbfounding to hear these self-righteous arguments especially when Americans, both employers and consumers alike, benefit from undocumented immigrants and their willingness to perform jobs that most Americans reject due to meager wages, low social status and hazardous work conditions. For example, one doesn’t see long lines of unemployed Americans applying for jobs as farm workers, performing back-breaking tasks such as picking grapes, lettuce or tomatoes. Nor do we see hordes of unemployed Americans in front of The Home Depot and other stores, chasing down eager employers/homeowners in search of temporary cheap labor.

In addition, the notion that undocumented workers lower wages represents another falsehood. Immigrants don’t control wages; employers do. No rational worker argues for lower wages and no benefits. Lower wages in the market place result from employer greed and the bottom line. For instance, by lowering operating costs, such as wages, employers may increase their profit margins.

Moreover, by paying undocumented immigrants lower wages, employers can afford to sell their products and services at lower costs to the public, whereby American consumers ultimately benefit by saving money. Thus, instead of appreciating immigrants when purchasing a garden salad, going to the dry cleaners, getting their homes remodeled and lawns mowed, hiring a nanny or domestic cleaner at affordable prices, many Americans blame these honest, hard-working individuals for everything that goes wrong in America.

This hypocrisy must come to an end! Americans who blame undocumented workers — the same workers who make their lives more comfortable and affordable — need to appreciate the hard work and sacrifice that immigrants go through on a daily basis in this country. This goes for all of those in Arizona who support this draconian law and federal authorities, under the Obama administration, who conduct daily raids against human beings who deserve to be treated with respect and dignity instead of like pariahs. 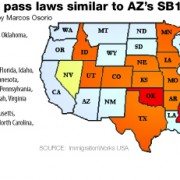 How Far Would You Walk for Your Dreams? Undocumented Students Coming Out of...
Scroll to top