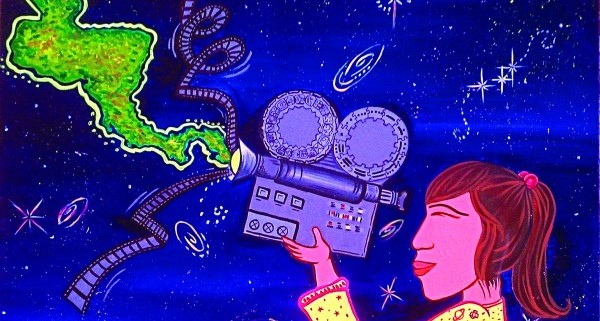 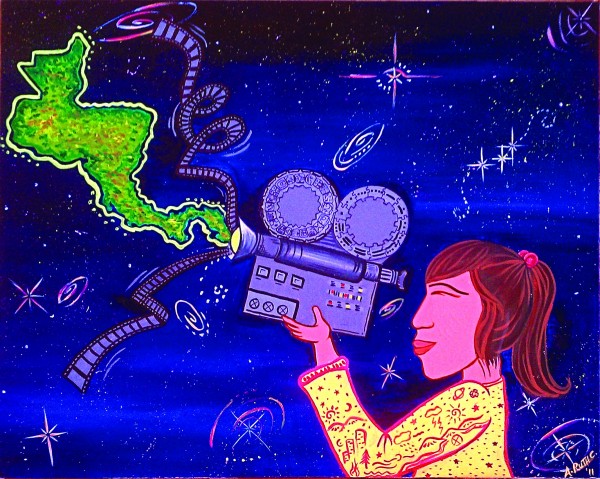 Ana Ruth Castillo, Los Angeles based artist with roots from Guatemala, contributed this artwork to the festival. Inspired to reflect culture and ancestry, the beauty of the natural world, and the sacred feminine, she paints on walls and canvas to share and connect. A college graduate from UC Santa Cruz, she dedicates her life and career to working with youth.

Attracting over three hundred people throughout its run, the festival featured work from rising artists that showcased a region that is typically understudied.

The Reel Politik film festival was organized by Gloria Chacon, a fellow at the Council on Library and Information Resources (CLIR). The term Reel Politik refers to the German term Realpolitik, referring to politics that is based on power and sometimes of coercion. The term highlights the effort to shed light on the political, eocnomic, and social issues of Central America through film.

She organized the festival in part “to really showcase the vibrant culture and different points of views and people trying to tell their story. Or trying to recuperate the story of their past.” She wanted to take part in the slow but growing study of Central America.

“To educate, to showcase, and to inspire,” Chacon said, explaining her hopes of using the festival as a way to inspire students to begin telling their own story through film.

The festival took around one year to organize, and it fell solely on the shoulders of Chacon with one student aid for help.

A few years back, the Icaro Film Festival in Guatemala impacted her by showing documentaries and films produced in Central America.

Chacon set out to collect a film archive for the UCLA library. However, the difficulty in obtaining films not easily available to the public meant each director had to be contacted directly. Her established contacts allowed her to bring attention to the event throughout the planning stage, resulting in full support by the administration.

The Central American community fully embraced the festival. At the film festival, many local consulates participated with Beliz and Guatemalan representatives providing small discourse on their respective country.

For Chacon, the involvement of the local community allowed the possibility of many to connect with others. Understanding people’s history is a necessary step in pushing diversity, especially on a college campus, she says.

At the event itself, the education of the countries was on full display. Books were sold to further touch upon the issues raised in the films. Students from diverse backgrounds participated in the Q&A. Different films provided insights into current social problems, and the effects past events currently have in society.

Although this was the first year the festival was held, Chacon hopes to do it again, but with some modifications. She would like to include short films by students and give awards to the best documentary, feature, and student films shown at the festival.

Regardless, this year the UCLA library gained a rich variety of films to provide commentary on Central America, a region that is currently growing among the fields of study. This gives the school an opportunity to become one of the emerging locations that are aiding the growth of Central American scholars. These films will become resources for all those students and community members that wish to focus on the region.

Every film showed, and many more, will be available for regular checkout at the Charles E. Young Research Library.

Letter from the Editor
Scroll to top