Westwood traffic slowed to a crawl Sunday afternoon as more than a thousand pro-Palestine demonstrators crowded the four corners of the Wilshire/Veteran intersection. The demonstrators rallied against U.S.’s foreign aid to Israel as they continue to illegally occupy Palestinian land.

The demonstrators initially chanted and cheered on the sidewalk as traffic-jammed drivers honked in support, waved Israel or Palestine flags, booed, and even flipped off protesters. Then they marched for about a mile to the Consulate General of Israel on the intersections of Wilshire and Granville. 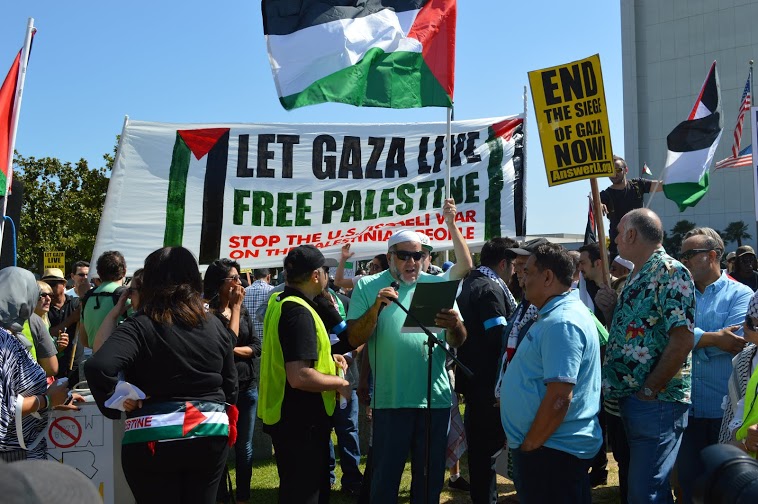 This demonstration follows one held last Saturday which occurred in the same place. That rally reinforced Israel’s actions as a mean of self-defense. It followed another protest two weeks prior in front of the Federal Building, denouncing the U.S. foreign aid and a July 8th Israeli operation that has caused more than 445 Palestinian casualties and about 15 Israeli soldiers and citizens.

The demonstrators gathered at the Wilshire Federal Building at 3 p.m. and began to march down Wilshire Blvd at 5 p.m., temporarily shutting down the busy street with Palestinian flags and calls for peace. Their destination was the Consulate General of Israel, about a mile away on Wilshire Blvd. and Granville. After, at about 5:50pm the marchers began to move back towards the Federal Building.

A small counter-demonstration of about a dozen supporters of Israel and its actions were present at one of the corners of the Wilshire and Veteran intersection.

The Israel-Palestine conflict has been a hot button issue here on the UCLA campus, as USAC (Undergraduate Student Association Council) voted down the resolution “to Divest from Companies that Violate Palestinian Human Rights” with a 5-7-0 vote in a secret ballot.

In more recent campus news, future UC Student Regent designate and UCLA student Avi Oved has been accused of a possible conflict of interest after leaked e-mails made headlines on the Daily Bruin and the Daily Cal. A group-me text named “BruinsAgainstBDS” also came to light, where Oved asks “Should I sit on the investment committee lol (aka where divestment would come to… slash never really because it doesn’t stand a chance” and 2014-2015 USAC Internal Vice President Avinoam Baral responding “Yes.” 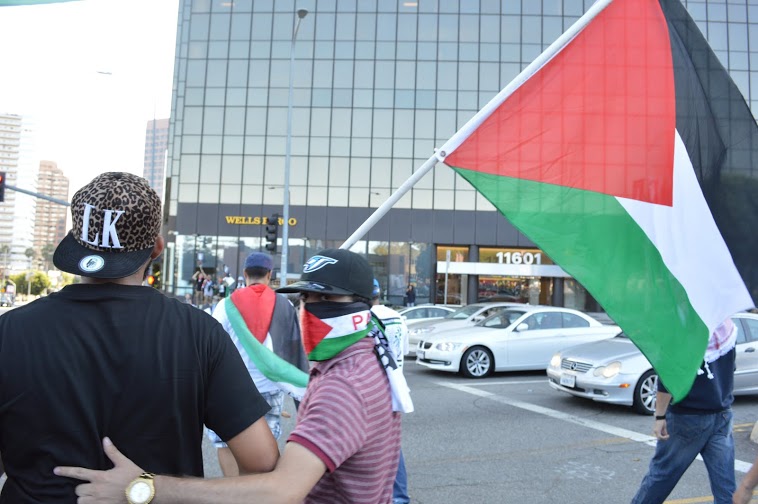