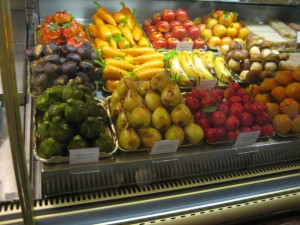 Back in mid-September, I decided to visit my parents in South Central, L.A. for the weekend. Feeling hungry after finally getting home, I headed straight for the kitchen and was surprised by all of the fresh and delicious looking produce they’d bought: organic nectarines, strawberries, and blueberries to name a few. Knowing that blueberries are particularly pricey, I was especially surprised to see them in the fridge. Apparently, they had decided to do their shopping for the week at a Trader Joe’s in Glendale. Needless to say everything they’d bought tasted phenomenal. I’d heard of Trader Joe’s many times before, but had never actually gone grocery shopping there before. It’s not the kind of grocery store you’d normally find where we come from;.Typically, Latino working class families aren’t familiar with Trader Joe’s or can’t regularly afford the high quality organic products it purveys.

Most often, Latino working class communities are hardwired by economic necessity to satisfy nutritional needs as fully and as cost effectively as possible. This usually means healthy, quality food choices, and healthy eating habits must be sacrificed for more accessible and convenient options: the most convenient and affordable being the Taco Bells, McDonald’s, Burger Kings, and KFCs so ubiquitous in our communities. Some of these chains have even attempted to market themselves as being much healthier than they actually are. McDonald’s and Burger King even offer real fruit smoothies and salads alongside the much more tempting and savory heart-attacks on buns.

According to the California Law Review, Latino communities are victims of “food oppression” and as these fast food chains continue to expand and profit from socially underserved communities, supermarkets providing healthier choices have simultaneously moved to more affluent areas.

While home cooked meals are definitely an effective alternative, sometimes it’s just more financially practical for families living on a budget to eat out.  As a child, whenever my mother or grandmother made a home-cooked meal, I remember being encouraged to eat as much as possible in one sitting. This is exactly why by the time I was ten, I started getting stretch marks and my mother had to start buying me clothes from the children’s husky aisle. In other words, I was a little chubby.

Latino youth ages 12-17 are the most at risk for becoming obese and are the most likely to be overweight. Latinos in California have the highest rates of obesity and type-two diabetes within the overall population.

Not even considering the regularity with which my family consumed fast food, Abuela’s “Huevos con chorizo y pancais” breakfasts in the mornings were compounded by Mama’s “you need to grow big and strong, I didn’t know she meant round two” dinners in the evening. Both of them had a way of guilt tripping me into eating more when I just didn’t want any.

The food was unbelievably delicious of course, but it was as if they’d trained me to go beyond a healthy limit. My nutrition Nazi of a mother would never miss a chance to tell me I needed to eat my meat because when she was growing up in the pueblo, they hardly ever had money for it. It was a stomach rupturing catch-22. If I didn’t eat the meat, I was being wasteful since a whole village of Mexican kids were suffering from malnutrition at this hour, and if I did eat the meat, those same children were still starving while a Mexican-American kid stuffed his fat face.

According to LCHC, the incidence of obesity (20%) is nearly twice as high for U.S born Latinos than it is for non-U.S born Latinos. (LCHC) Furthermore,  CLR conducted a study on Mexican immigrants in the San Joaquin Valley showed that within one generation of emigration, fast food consumption within the Mexican population increased five times leading to a decline in nutrition and increase in weight. (CLR)

The weekend of my visit to my parent’s, after I’d been able to enjoy some of the produce they’d bought from the previous week, I decided to go with them to do their shopping for the upcoming week at the same Trader Joe’s in Glendale.

While in that Trader Joe’s, far from South Central, I noticed how healthy I felt, how young and lively my body moved and bounded up and down the aisles of organic fruits, breads, and chocolates. The other shoppers were mostly well to do Euro-Americans with very healthy figures in comparison to my parents. But there we were and in our rightful place I’ll add, finally enjoying the hard won fruits of a long and mostly unhealthy lifestyle war.

If only the businessmen behind Trader Joe’s had decided to target the growing Latino market when I was growing up with something like Vendedor Jose’s.

‘How close to zero do they want us to get?’ Students of color under attack!...