States are taking matters into their own hands arguing the 10th amendment to address immigration because the federal government has not passed an immigration law in the past 15 years. Critics claim it is due to the fear of losing political capital, as Russell Pearce, the author of the infamous SB1070 experienced when he became the first Arizonian elected politician to be recalled. I admire him for addressing such a controversial topic. However I disagree with Arizona’s and other anti-immigrant copy-cat laws such as Georgia’s House Bill 87 and Alabama’s House Bill 56 that have been adopted.

Luckily, California has the opposite stance: Assemblyman Felipe Fuentes has created 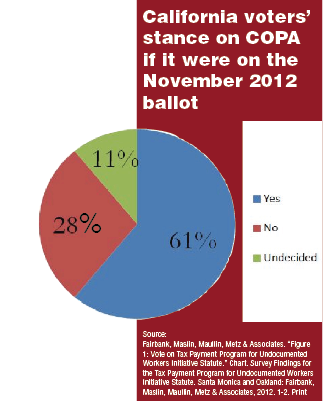 an initiative known as California Opportunity Prosperity Act (COPA) that failed to receive the 504,760 signatures required and will not be on California’s November 2012 Ballot.

Despite the initiative’s lack of signatures, COPA is sure to return and will act as a call to action for the federal government to address the immigration topic. Therefore, it is important to stay informed.

Undocumented immigrants already contribute $7 billion in Social Security per year to the US through the Individual Taxpayer Identification Number (ITIN). ITIN is issued by the IRS to individuals who do not qualify for a social security number, in order to comply with the U.S. tax laws (United States, IRS General ITIN Information). Unfortunately, ITIN does not allow undocumented individuals to work in the US, receive social security benefits nor the earned income tax credit. Basically, undocumented individuals do not receive anything in return (United States, IRS General ITIN Information).

COPA will act as a catalyst and encourage undocumented workers to pay state income taxes. It is estimated that COPA will bring a million new taxpayers and will contribute approximately $325 million annually which would be used to fund state (police and fire etc.) services, based on a UCLA NAID Center research report by Raul Hinojosa-Ojeda and Marshall Fitz.

Clearly, COPA will benefit the state; however, what about the individual?
Unfortunately, undocumented individuals will continue to be ineligible for welfare benefits as stated by the 1996 Personal Responsibility and Work Opportunity Act except for medical emergencies, nor will COPA grant citizenship or amnesty. COPA members will only gain the freedom to work without the fear of deportation with this relief, undocumented individuals will not be afraid to invest in their self-improvement via education.

Despite the expected benefits COPA will contribute to the state and to the individual; there are still a few obstacles in its path. Firstly, COPA has not made it to the California Ballot and would still need to garner enough signatures and be voted on. Secondly, since immigration does not fall under the state’s jurisdiction, if COPA were to pass, California would need to ask Immigration and Customs Enforcement (ICE) to make these eligible individuals and their families their lowest priority in deportations.
If COPA passes in California, it will set a great example for other states to follow and force the federal government to finally take a stand. Enough time has passed and action needs to be taken. It is in California’s best interest to adopt COPA not only for our economy but also for the benefits it would provide the state’s undocumented inhabitants.