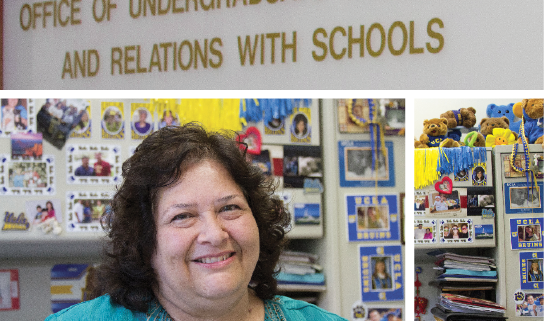 Rosa Pimentel in her office surrounded by pictures of her past students.
(Photo by Katrina Vo)

It was 28 years ago when Rosa Pimentel transferred to UCLA from East Los Angeles College. As a student worker in the UCLA admissions office she discovered a passion for making education accessible.

“Could I ever have dreamt of being­ an associate director in this office back then?” Pimentel asked. “No, that was so far removed when I stepped into this office as a student worker.”

Paperwork is stacked on Pimentel’s desk, and photos of past students blanket her office wall, a testament to her commitment and long­-standing career in undergraduate admissions. “On a bad day I look at one of the pictures on my wall, and I think: ‘I remember when that kid came into UCLA, and they were so fresh and so young, and now I know them and they’re a doctor, they’re a lawyer.’ ”

Pimentel’s workload has increased significantly with the rise in admissions applications for 2012. According to the University of California Office of the President, UCLA admissions have reached a record high of 91,512 students.

While receiving more applications than any other UC, admissions has had to adjust to the sudden retirement of Dr. Vu Tran as the admissions director. This follows the recent retirement of two associate directors and the vice chancellor of student affairs. With the core managers of admissions all leaving relatively at the same time, Pimentel and her staff have had to take on more leadership responsibilities. 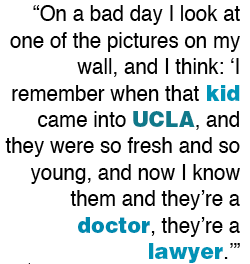 “I’m very much appreciative of the fact that they recognize that I’m a leader and that I have experience,” said Pimentel. “I feel it’s a huge responsibility, and I try to do my best to represent the entire office.”

Early on, Pimentel helped to coordinate the Mariposa Project, which focused on outreach to Latino students in the East Los Angeles area, as well as co­-coordinating the Early Academic Outreach Program (EAOP) with the current director Dr. Debra Pounds.

When EAOP was moved out of undergraduate admissions in the late ’90s, Pimentel decided to stay in admissions to ensure that there was still sensitivity towards first generation and low­ income students.

“These were already kids that had to grow up very quickly, deal with very serious issues in their lives,” said Pimentel. “They wanted an education, and their parents wanted that for them, I felt very passionate about that and that was the main reason why I wanted to stay in admissions.”

When proposition 209 passed in 1996, it outlawed the use of affirmative­ action criteria in admissions, replacing it with the “holistic” review method, in which personal and academic achievements are considered, that was introduced in 2007. Pimentel has a front row seat to the shifting admissions criteria, which is information that doesn’t always trickle down to community college and high school counselors.
According to Pimentel, working at UCLA has been difficult and challenging at times, but she attributes her longevity to the fundamental values and beliefs instilled in her as a child.

A Los Angeles native, Pimentel has lived in the East Los Angeles area for most of her life: first living in Lincoln Heights, then moving to Estrada Courts in Boyle Heights with her grandmother, mother and sister.

Originally from Chihuahua, Mexico, Pimentel’s grandmother worked in a garment factory and never received a high school education. “What I learned from her was really to trust yourself,” said Pimentel. “If you allow yourself to grow, then you don’t see any little setbacks as failures.”

Pimentel recalls how her mom always ensured there was a good environment for her to study at home when she was growing up. “You know things happen in the projects; there’s always some drama going on outside, but she always made sure that it was quiet,” said Pimentel.

Despite not having a car, Pimentel’s mother would take them to explore the city by using public transportation. Pimentel remembers how as a preteen her mother would ask her to map out the routes to places they would visit.

Her mother later revealed that she took them on these trips because she didn’t want them to feel trapped or restricted to their neighborhood. “I thought she was the most brilliant person,” said Pimentel. While the destinations were fun, it was the long bus ride that provided Pimentel the opportunity to see a world outside of her neighborhood.

Going to the Lincoln Heights public library was a weekly event for Pimentel and her sister. Her mother would have them check out ten books every week and read them aloud to her. At age ten, Pimentel was reading at a twelfth grade level. She recalls reading literary classics from authors such as Ernest Hemingway, Charles Dickens, and John Steinbeck.

Tears welled up in Pimentel’s eyes as she remembered how at age ten her mother revealed to her that she couldn’t read or write. “I knew she must have had a hard life and that people made fun of her and disregarded her,” said Pimentel. “It just made me want to study more; it just became more important for me to be the one to honor her.”

While living in Boyle Heights, Pimentel attended Lincoln High School and recalls how despite her aspirations to go to UCLA, her counselors would underestimate her. “In high school, I had counselors who didn’t believe I should be in AP or honors courses and that hurt me back then,” said Pimentel. “My first choice was UCLA, but everybody told me that because I was so shy and quiet in high school that I would flunk out because it was too big.”

After being excluded from an AP Biology class, Pimentel’s friends advocated on her behalf and eventually convinced the teacher to let her in. While Pimentel never discovered why she had initially been excluded from the class, she continued to take AP and honors courses at Lincoln, receiving A’s and B’s.

As the first in her family to finish high school, Pimentel recalled the pain when her grandmother died before getting to see her graduate.

Transforming grief into a source of strength and resilience, Pimentel continued her education by going to East Los Angeles College, transferring to UCLA and eventually graduating.

“Sometimes you feel like you fail, but you really haven’t,” said Pimentel. “You have different thresholds in life where you experience things, and you have to pick yourself up and move forward.”

Many of the challenges that Pimentel experienced as a student are still prevalent today. According to 2009­-10 California Department of Education First Annual Report on Dropouts in California, Latinos have a dropout rate of 22.7% and 31.1% for English learners. Only 26.5% of Latinos who graduate high school complete UC and/or CSU entrance course requirements.

According to Pimentel, “All the statistics are pointing to: you shouldn’t have made it this far.” She added that having the confidence to continue pursuing higher education can be difficult in an environment where there aren’t many examples or role models to look to.

“Sometimes people need to see examples of people; how they gain their inner strength, how they cope with life.”

While Pimentel acknowledges that as a student worker she learned a lot from people in admissions, she still felt that something was lacking.

“There really wasn’t a Latina in a higher level position for me to look up to when I was a student,” she said. As the admissions office continues to be restructured, Pimentel remains optimistic about the future and offers her recommendations.

“What I really hope for UCLA is that we continue to diversify the leadership in all areas at the top.”

The Business of Entertainment, Breaking In and Succeeding

Letter from Within
Scroll to top